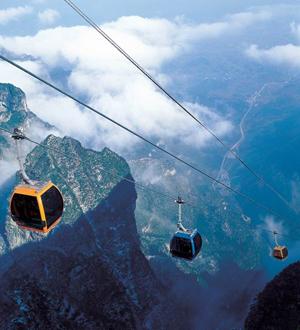 Airport in Zhangjiajie
Zhangjiajie Hehua International Airport, located in Hehua Village of Yongding District, is about ten kilometers away from the downtown area. It is the second largest international airport in Hunan Province and is known as one of the most beautiful airports in China because the scenic spot Tianmen Cave can be seen from the airport. The airport was formally opened to traffic in 1994. As of April 2019, a total of 42 domestic and international air routes have been opened here.

Airport shuttle bus Line 1 is available between Zhangjiajie Hehua International Airport and downtown area. Its service time is from the arrival of the first flight to 00:00, with an interval of 20-40 minutes.

Railway stations in Zhangjiajie
Though railways in Zhangjiajie are not that much, yet they have already connected Beijing, Shanghai, Guangzhou, Shenzhen, Changsha, Guiyang, Liuzhou, Yichang and other large and medium-sized cities. In particular, the opening of Changsha and Zhangjiajie intercity trains has greatly facilitated the travel of tourists.

From Zhangjiajie to Changde south bus station – the first bus departs at 06:30 and it covers a 200-kilometre distance.

From Zhangjiajie to Wuhan – the bus departs from the station at 08:30, covering 550 kilometers.

Zhangjiajie City Transportation
Bus – since Zhangjiajie is not a big city, the bus routes are relatively few, and there are less than twenty bus routes in the city.