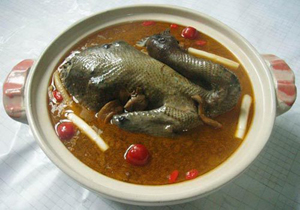 Food of Tujia peole in Zhangjiajie perfectly combines its own national features and essence of Hunan cuisine. Therefore, spiciness, dried meat, sauerkraut, pickles are their favourite. Recommend you to try it, for it is so special! Although it charges high if you have dinner in Zhangjiajie Scenic Area, you can still try some corns and wild kiwi fruit that are rarely found in the downtown, and you can order dried meat in the eatery within the area, for it is uncommon in the urban, too. Moreover, you can patronize Dai pai dong in the street when evening sets in. With 50yuan, you are able to have a dinner in contentment!! Some specialties are stewed tofu with chicken blood cakes, silkie soup, bean residue, kiwi fruit juice, just to name a few.

Silkie and gastrodia elata soup is quite nutritious and considered as secret recipe in folk. Gastrodia elata of Zhangjiajie, golden and bright, can be classified as top grade. The soup is nourishing, in the meanwhile, it is instrumental in treating dizziness and apoplexy.

She rice is the must-eat dish when Tujia people celebrate She Day on February. First, chop vegetables picked up from the mountain before the day. Next, dry them in a pan. Then cook sticky rice and glutinous rice at the same time, and place cured meat and vegetables in it. Several minutes later, aroma will assail your nostrils.