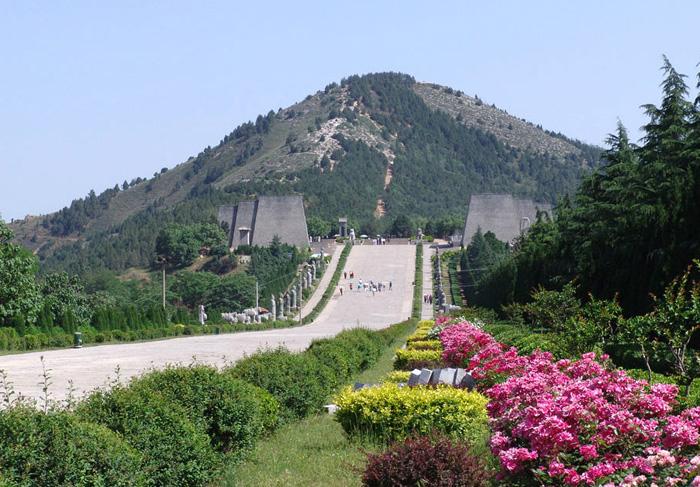 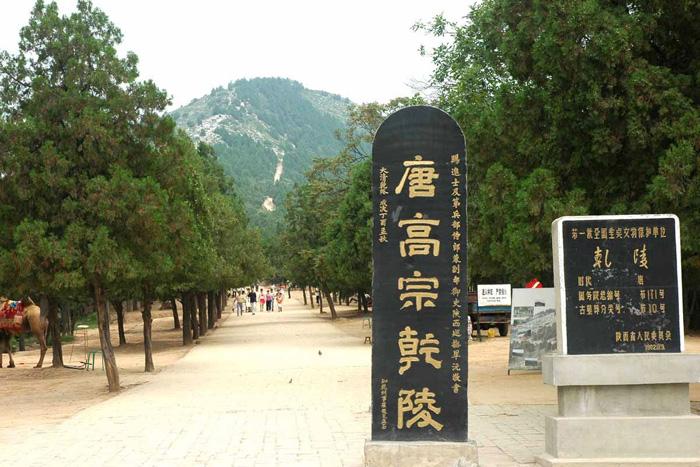 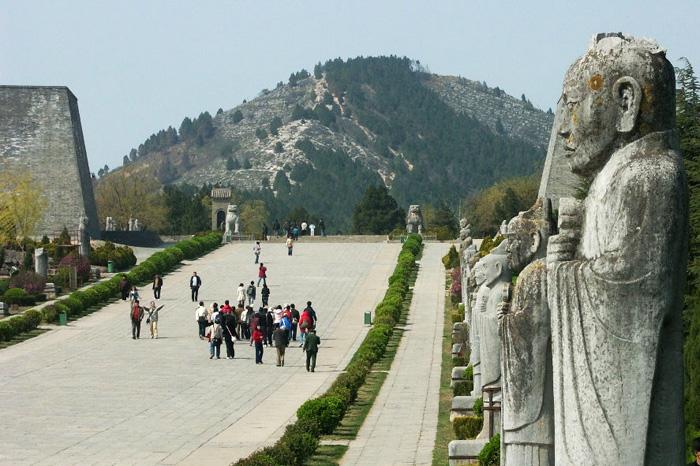 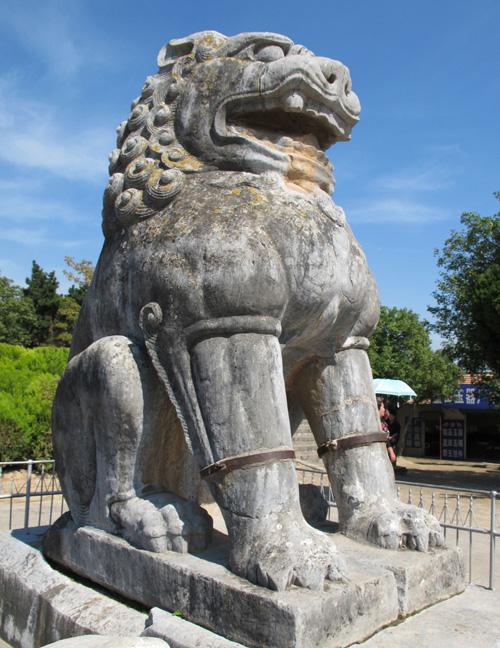 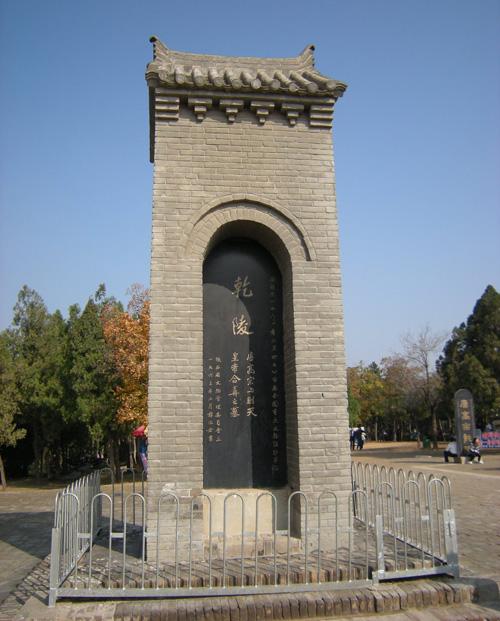 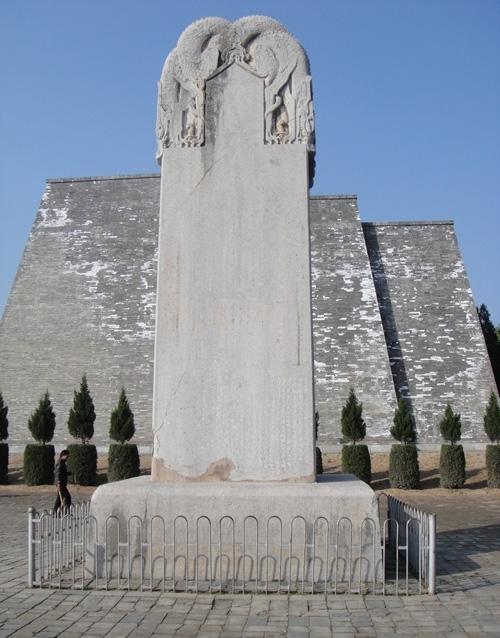 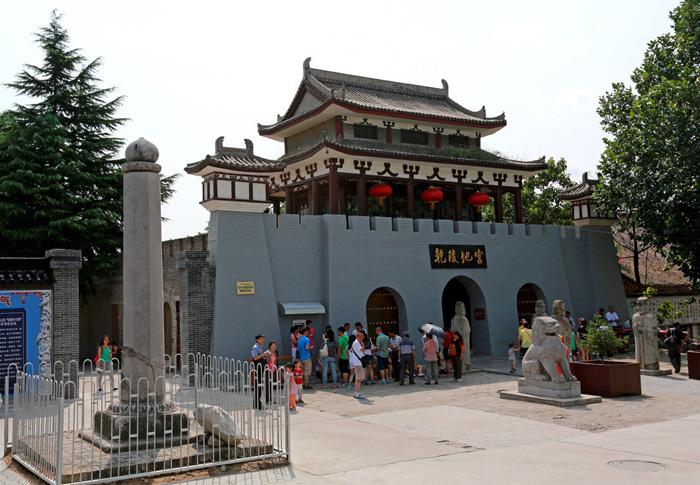 Constructed for 23 years since 684, the Qianling Mausoleum of Tang Dynasty (618-907) is known for the only multi-burial royal tomb in Chinese history. According to ancient Chinese tradition and system, emperors and their queens usually had their independent mausoleums after their death. Distinctively, Emperor Tanggaozong (628-683) and his queen Wu Zetian (624-705, the only female sovereign ruler of China) – were buried in the same one.

Having escaped from pillage and destroy for more than 1300 years, Qianling Mausoleum is one of the few intact Chinese royal mausoleums. The design is so secret that no one could found its entrances until at the end of 1950s several local farmers discovered unexpectedly when they exploded a corner of Mount Liang for stones to build the road. 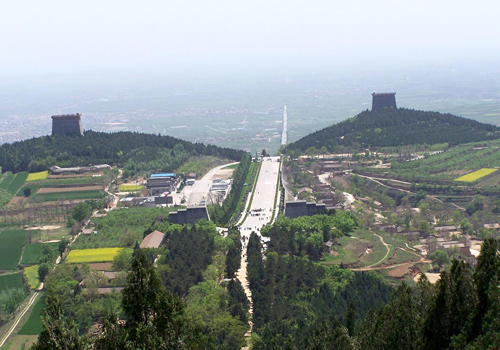 Carefully designed on the basis of the general layout of the capital, the Mausoleum majestically sits on the limestone Mount Liang, 85 km northwest of Xi'an City. The mountain contains three peaks, with the highest one in the north at an altitude of 1047.9 meters on which the mausoleum locates: the other two in the south are relatively lower and separated by the Sima Way.

It is recorded in history data that the Qianling Mausoleum was originally protected by an inner wall and an outer wall and many other imposing architectural complex. Detection shows that the area of the "inner city" of the mausoleum is about 2,400,000 square meters with four city gates in due four directions.

Starting from the first gate of Qianling Mausoleum, visitors will experience a long ladder with 537 steps before they reach the wide and flat Sima Way leading to the tombstone of Emperor Tanggaozong rebuilt in the 18th century (Qing Dynasty). Today many stone statues of ornamental columns, mythical auspicious beasts, ostrichs, horses, lions…still can be seen in the spot. 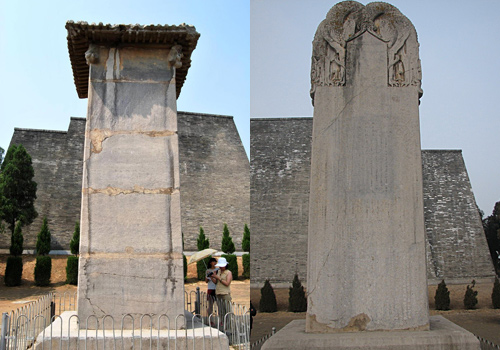 Outside the south gate of the mausoleum erect 2 stone tablets. One of the tablets is the "Stele of Merits of Extolling Emperor Tanggaozong (述圣记碑)" written by Empress Wu Zetian: the other one is the "Wordless Stone Stele (无字碑)" of Empress Wu Zetian on which nothing is written. It is said that the reason for that is she did not tend to receive conventional official praises but comments by all people. 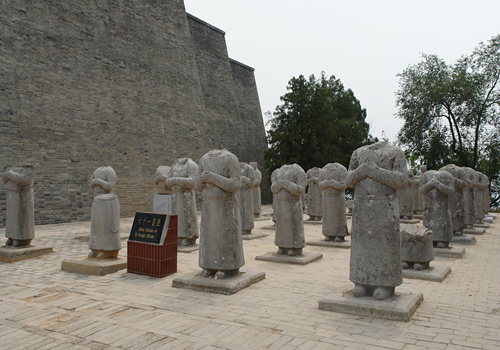 In addition, there are also 61 stone figures stand respectfully there, who are concluded to be the statues of chiefs of ancient Chinese ethnic minorities and ambassadors from the friendly countries of Tang Dynasty judging from their clothing, but it is strange that all of 61 statues are without head. Some scholars deduce that the head of the figures disconnected in a strong earthquake recorded in historical data.

Apart from the main tomb, other 17 subordinate tombs of princes, princesses and ministers were arranged there to accompany the emperor and the empress. Over 4300 pieces of cultural objects including more than luscious murals had been unearthed from 5 of the 17 from 1960 to 1971.

The Underground Palace of Qianling Mausoleum 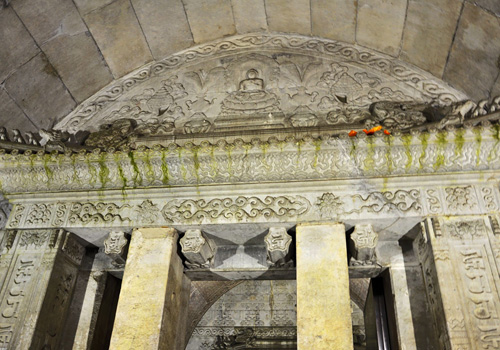 Relevant written materials and probing to the Qianling Mausoleum show that the main chamber of it seems to be made up of tomb passage, courtyard, paved path, and three tandem coffin chambers, probably with swing chambers. The coffin of the emperor should be put in the middle supported by a moisture-proof and antiseptic base, with priceless jewellery blanketed by a "Seven Star Board". According to records, a stone bed was put behind the chamber, on which the imperial crown, robes, sword, food and other favorites of the emperor were placed. 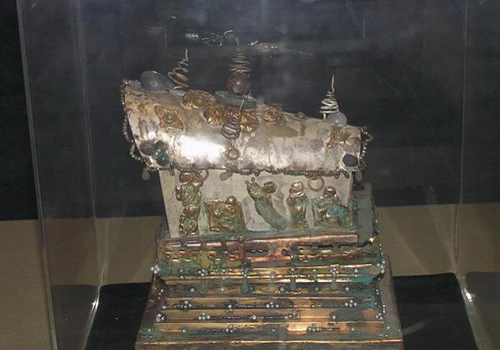 For technologic reasons, thorough excavating of Qianling Mausoleum will not commenced in the near future so that the cultural relics in the mausoleum can be keep in good condition underneath. Mr. Fan Ying, deputy curator of Museum of Qianling Mausoleum, wrote an article about what were buried inside, guessing that the burial objects could be classified to be six sorts:
- metal wares (gold, silver, copper, bronze, iron…):
- ceramic, porcelain, glazed, class wares:
- corals, agates, bones and horns of animals, ivories and some other appliances and ornamentals:
- stone carvings, stone figures of human and animals, stone outer coffin, etc:
- murals and inscriptions:
- paper, books, calligraphies and paintings, silk, linen, leather, burweed braided fabric, and so on.

According to historical data, Emperor Tanggaozong (628-683) is the nine son of Emperor Tangtaizong (599-649) and Queen Zhangsun. At the age of 16, he ascended the throne and became the third emperor of the great Tang Dynasty.

After his middle age, Emperor Tanggaozong had difficulty in eyesight, so his beloved queen Wu Zetian was appointed to dispose the state affairs. Beyond his expectation, the scepter of the country was mastered by the queen gradually. To avoid the loss of the imperial authority, the emperor tried to pass down it to their sons for several times but failed finally. After Tanggaozong's death in 684, the queen complied with the last wish of her husband who died in Luoyang, ordering to escort him back to the capital Chang'an (known as Xi'an today) and burying him in the Mount Liang. 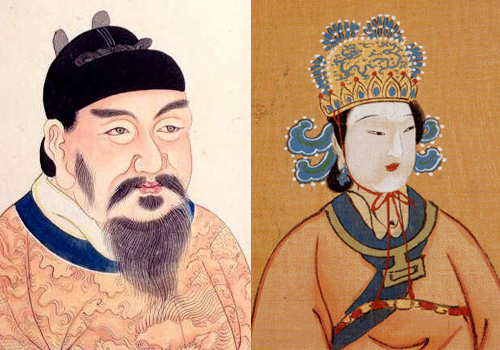 Wu Zetian (624-705) was born in a rich family in Sichuan Province. Her father used to offer assistance to Emperor Tanggaozu before he founded the Tang Dynasty, therefore her family was known to the Tang imperial family. In 637, Emperor Tangtaizong, the second emperor of Tang, selected 14-year-old Wu Zetian to be one of his concubines. But after a short time of partiality by Tangtaizong, she was left aside and spent a long lonely time of 12 years. When Tangtaizong is seriously ill, she fell in love with one of his sons, who is only 4 years younger than her and became Emperor Tanggaozong later. After Tangtaizong's death, Wu Zetian and other concubines who had no babies were sent to the Ganye Nunnery to pray for this departed emperor.

Long before, she was summoned back to the imperial palace again by Emperor Tanggaozong. Then during the next 9 years, this tricky woman defeated the queen and other concubines by intrigues and gained the position of queen. After she came to the throne after 6 years of Emperor Tanggaozong's death, she dethrone her young grandson emperor, claimed herself empress, renamed the state title from "Tang (唐)" to be "Zhou (周)", and commenced her sovereign life for 16 years (690-705).

In 705 the Shenlong Coup broke out and Wu Zetian was forced to give the imperial authority back to her son (Emperor Tangzongzong, who was dethroned by Wu Zetian before). To obtain a shelter, she also announced to abolish her title of empress and requested his son to bury her with Tanggaozong as his queen. Tangzongzong gave his mother the green light.

Although Wu Zetian had ruled the country as an empress for 16 years, the mausoleum of her husband and her is still considered to be one of emperor and queen according to tradition.