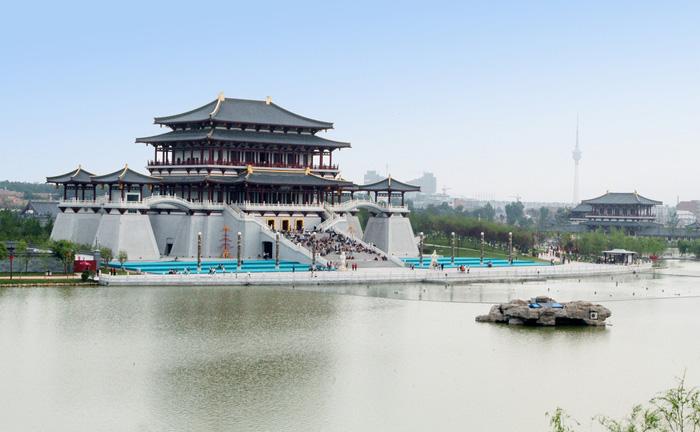 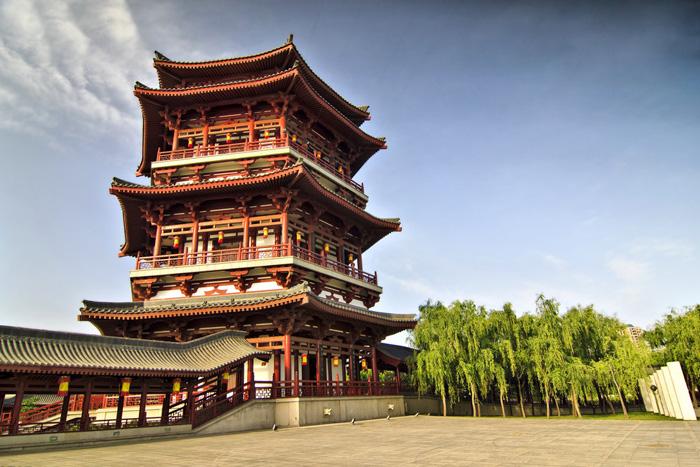 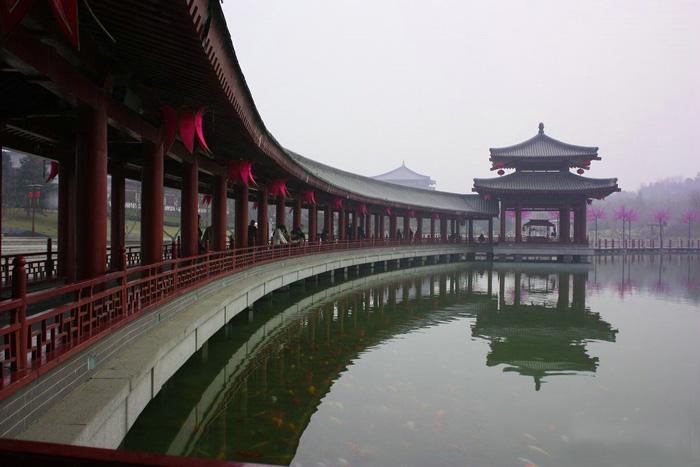 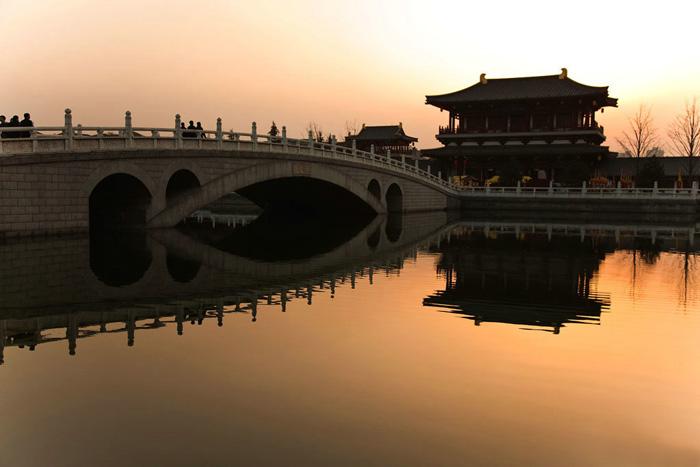 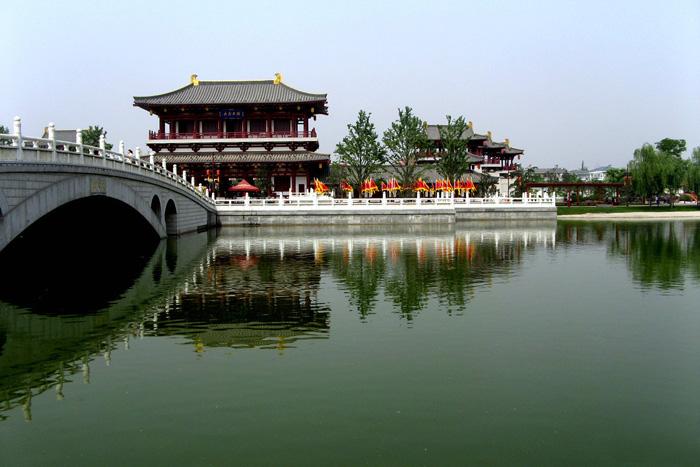 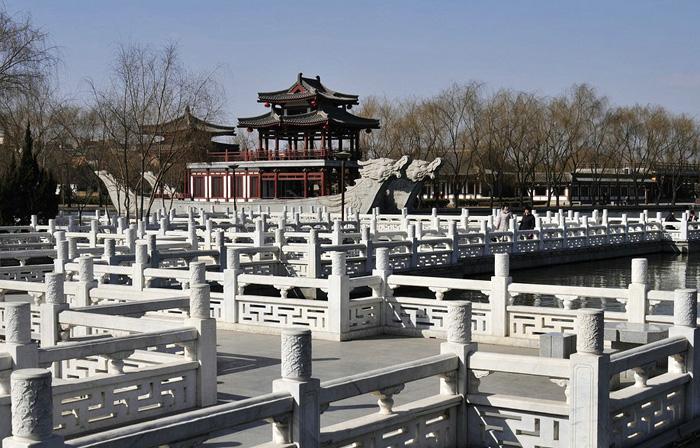 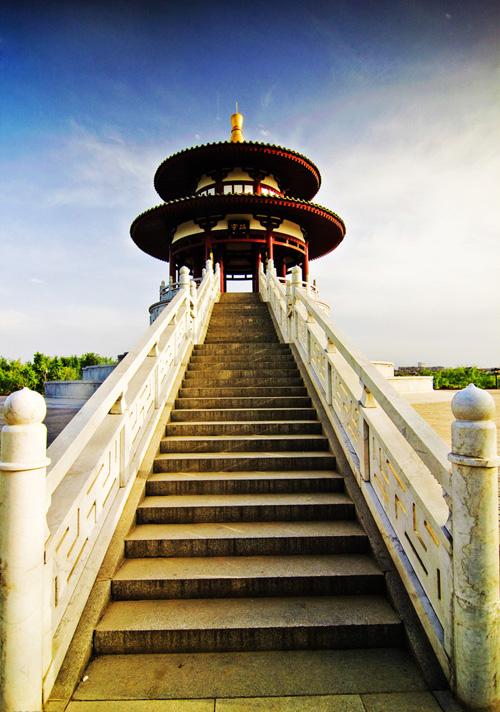 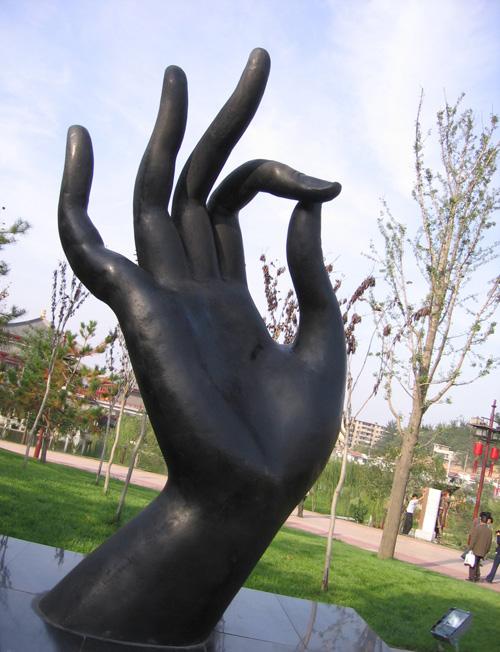 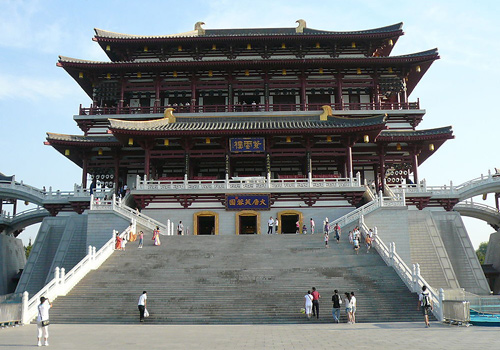 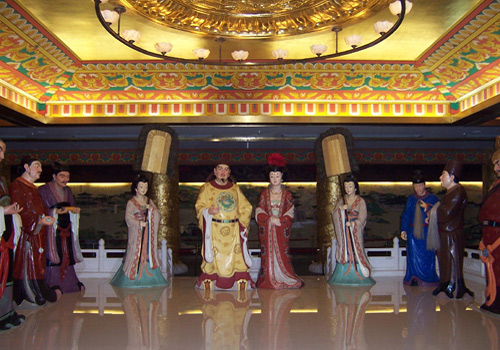 The Cultural Area of Emperors centers upon the Purple Cloud Building (the landmark of the whole park) and re-presents the supreme of the emperors of Tang Dynasty. According to historical records, the original Purple Cloud Building was constructed in 726 and was frequented by Emperor Tangminghuang (685-762) at festivals. Now it is rebuilt on its ruins with four storeys: the first storey with country-level cultural relics, the large model of the imperial Chang'an (Xi'an) city, and sculptures and murals about the "Prosperity of Zhenguan", which is the period of florescence of Tang during Emperor Tangtaizong (599-649)'s reign; the second with a cluster of painted sculptures of ministers who are talking with Emperor Tangminghuang; the third being a performing hall where the royal dance accompanied by music is showed; and the fourth set up with a copper tower for throwing game.

On the lake in front of the Purple Cloud Building is the amazing world-class waterscape (120 meters wide, 20 meters high) with changeable visual effects formed by music, fountain and laser light – the water curtain movie "Da Tang Zhui Meng (大唐追梦)" will lead visitors back to the ancient Tang and the breathtaking show of "Dragon flies among sparkles" at the end of the movie, which is an intangible cultural heritage of China, will excite visitors in another way. 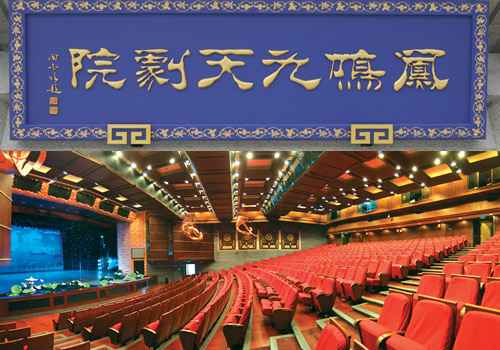 3. Cultural Area of Songs and Dances

The Fengmingjiutian Theatre south of the Purple Cloud Building is a modern "royal theatre" in the area. The dreamlike song and dance drama "Dream of Tang Dynasty (梦回大唐)" is the theme program produced with modern means of artistic in a bid to create an excellent audience effect. 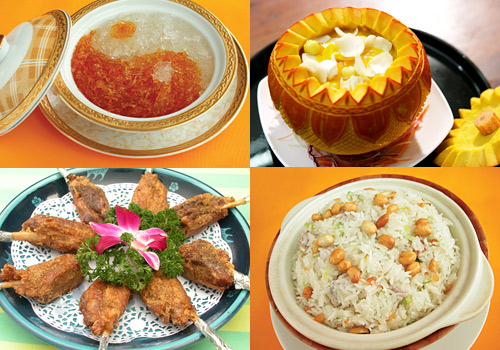 The Area of Food Culture located north of the West Gate of Tang Paradise is a large theme dining area showing with food, wine, utensils and music. The grand royal banquet halls of Tang style can cater for high-level parties, banquets and even weddings, and the buffet area provides visitors with much convenience. 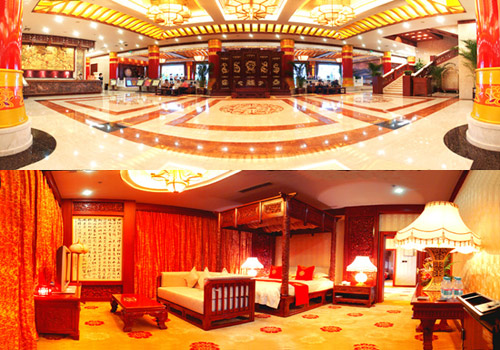 Made up of the Tang-style market and the Square of Theatre, the area is a miniature of the ancient Tang market. The cultural streets in this area diffuse lively atmosphere with various characteristic items: handicraft, acrobatics, food, tea, wine, painting, calligraphy, lion dance, stilt, Shaanxi Opera, etc.

By the lovely Lotus Lake there is a Tang-style architectural complex, which is a deluxe five star hotel named Fanglingyuan (芳林苑). The 63 rooms of the hotel are designed in diverse styles with royal element and garden. 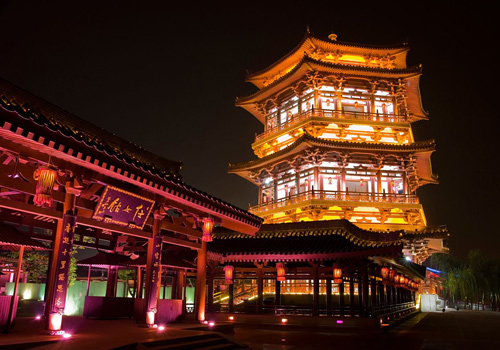 The Maid Building and the Rosy Cloud Pavilion are the main body of Area of Female Culture. The building reveals the mind of the female of Tang Dynasty in dress, sports, love, politics, etc. In the northern hall of the building the show of dress and personal adornment dynamically re-presents the elegant demeanour of the female of Tang. The Rosy Pavilion stretching from north to east for nearly 300 meters is a place to learn and feel the daily life of the time.

Featuring the tea culture of Tang, the Luyu Tea House in this area is a top-grade tea house comprising royal tea art, scholars' tea art, folk tea art, and tea ceremony. Here not only can visitors enjoy classic tea art show but also they can have a chance to have a taste of some rare and refreshing Chinese teas such as the Dahongpao (大红袍), Shuangfei (双飞), Oriental Beauty (东方美人). 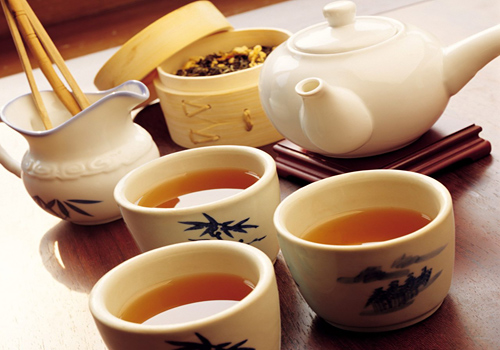 Famous for the flourishing apricots in history, the Apricot Garden Closed to the North Gate of the park is a spot for displaying the imperial examination system of Tang Dynasty. Early spring is the best time to visit the apricot blossom in the garden. Moreover, the Shaolin Kungfu Show makes the quiet garden animate.

The frequent communications between China and the world can be seen here. Surrounded by water at three sides, the wharf in it is a good place for leisure and recreation.

The Tang is dynasty rich in wonder children. The Recreation Area for Children north of the West Gate of the Park centers on this topic and tells stories of wonder children of the dynasty by amusing items.