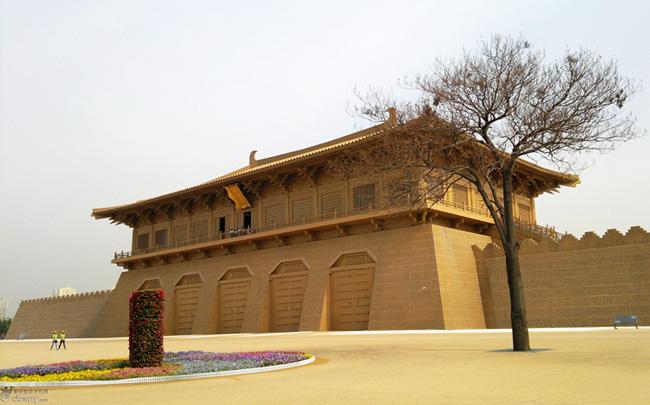 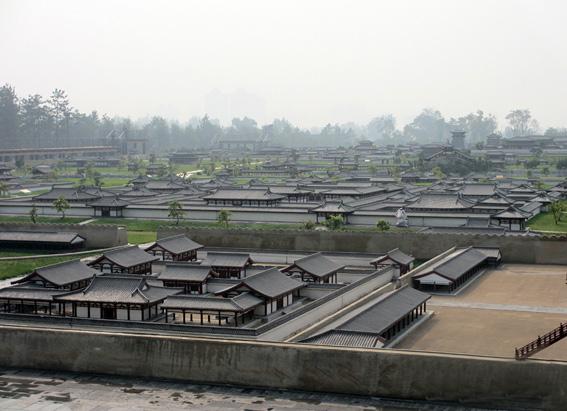 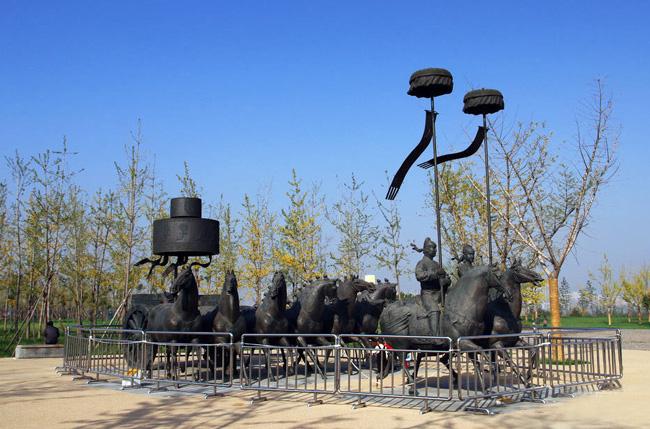 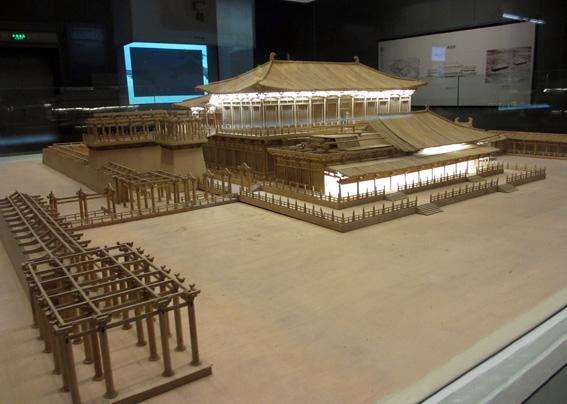 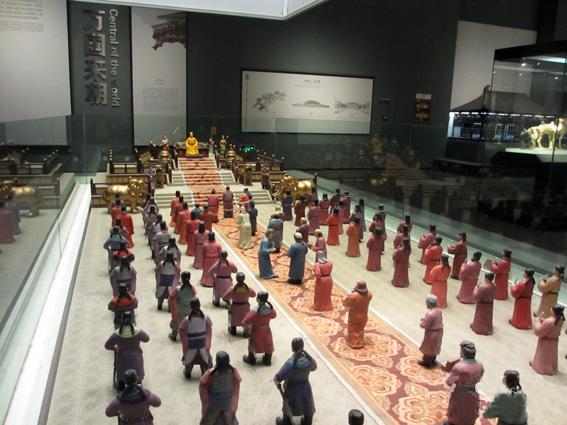 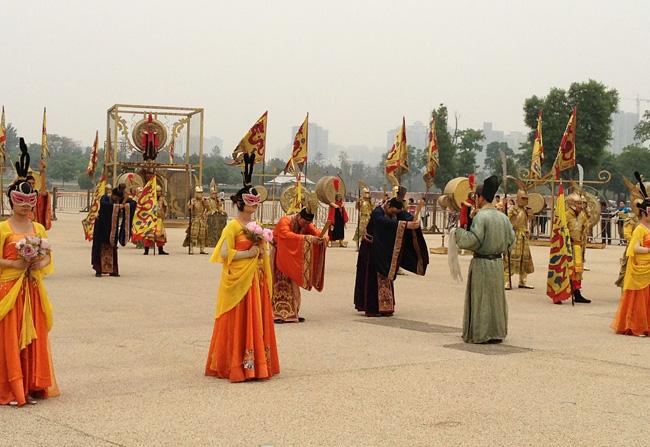 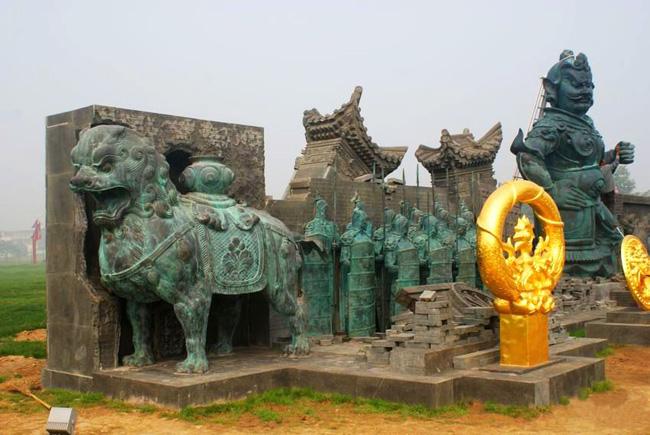 Constructed on the relic site of the Daming Palace, which was the imperial palace complex of Tang Dynasty (618-907), the Relic Park of Daming Palace was officially opened to the public on October 1st of 2010.

Being recovered in accordance with the original palace, the architectural complex in the park is built in typical Tang style with red and white walls and gray roofs, imposing and majestic. Apart from imitated buildings, the park has also been equipped with more modern items and facilities such as the archaeological experience center and the IMAX Theater to offer visitors more experiences in the history of the palace and the dynasty. 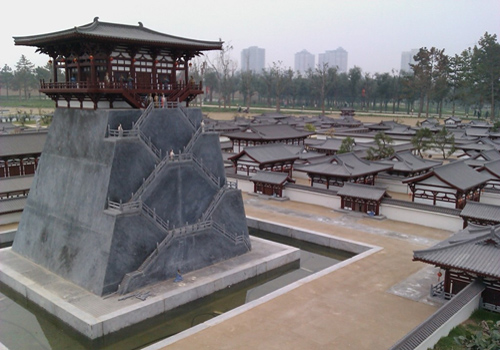 Opened on the same day, the Museum of Ruined Site of Daming Palace attached to the park is a theme museum designed to be semi-underground by the Tsinghua University of China. On account of protecting the relics, the museum is also totally enclosed with air-condition, artificial daylight and all kinds of high-tech facilities, which make it a modern palace of arts. 268 pieces (sets) of cultural objects furnished with rich background information are exhibited in the museum all year round, systematically introducing the history of the Daming Palace and the development of the park. 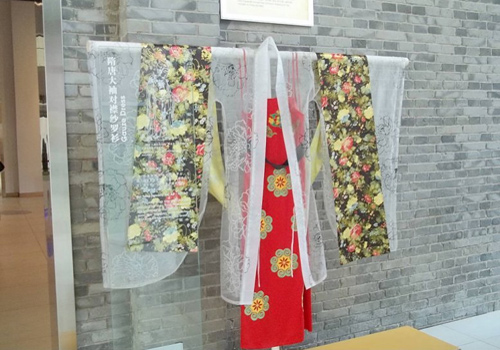 The Archaeological Discover Center sitting at the west side of the site of the royal way of Daming Palace covers some 3500 square meters, showing several topics on archaeology by genuine cultural relics, multi-media show, interaction with visitors, etc.

In the lobby of the museum there is a legendary animal named Chiwen (鸱吻), which is the biggest one among all of that have been founded in the Daming Place. Chiwen is said to be one of the nine different-looking sons of dragon, which likes swallowing fires and was enshrined on roof for guarding a house.

The fist exhibition hall is the where the cultural relics were displayed, including mirrors, ancient shell currency, "knife money" and "Jiaozi" (交子, the earliest paper notes in the world). At a showier corner of the hall, visitors can see various clothes of many dynasties. Also, the multi-media walls and light boxes will show people what is archeology and how it is undertaken as well as some stories relevant to the topic. 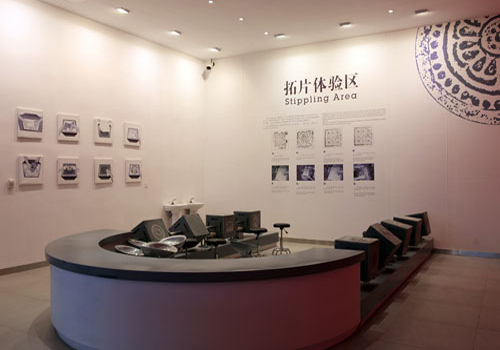 The second hall introduces what are usually prepared before archaeological excavation such as satellite positioning. According to the video games in the hall, people can learn that different historic sites are excavated by different ways and attend the game in person.

In the next hall visitors can try the jigsaw puzzle by resembling ancient pieces and have a chance to see dresser, I-go, bowls, plates and other articles for daily use in the western glass room. 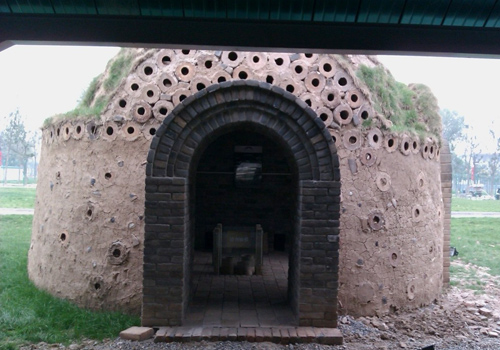 The part after the third hall is the site of archaeological excavation, the laboratory for cleaning cultural relics, the ancient bun-like brickkilns. Visitors can also try making ceramic wares in the ceramic bar there if they are interested in it. And, the world cultural heritage-themed steel structure near will lead people a world of Silk Road and other significant cultural heritages all over the world, containing the Great Wall of China, the Pyramids of Egypt, etc.

In the outdoor garden there are several games, e.g. jigsaw puzzles and playing ancient Chinese musical instruments, for children to get to know archaeology in a relaxed circumstance.

The Daming Palace of Tang Dynasty was among the "three great palaces" of Chang'an (Xi'an) together with the Taiji Palcace and the Xingqing Palace. The palace occupies some 3.2 square kilometers, equaling 3.5 Forbidden City, 3 Palace of Versailles, 12 Kremlin, 13 Louvre, 15 Billingham, or 500 football fields. The original palace was built in northwest of Xi'an named after Yong'an Palace in 634 but ruined during wars in 896. 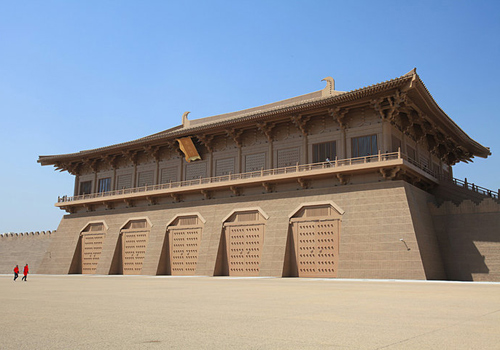 Daming Palace is made up of the "Front Court" and the "Inner Court".

The Front Court: Hanyuan Hall is the main hall of this court as well as the whole Daming Palace. It is 600 meters north of Danfeng Gate, the main gate of the palace. The hall was the place where important national ceremonies and cerebrations were held. About 300 meters north of the Hanyuan Hall is the Xuanzheng Hall in which daily national affairs were discussed between emperors and ministers. 95 meters north of the Xuanzheng Hall is the Zichen Hall where emperors had a private audience with ministers. The arrangement of the three Hall was passed on to it following dynasties. The layout of the Hall of Supreme Harmony, the Hall of Central Harmony and the Hall of Preserving Harmony of the Forbidden City in Beijing is a typical representation of that. 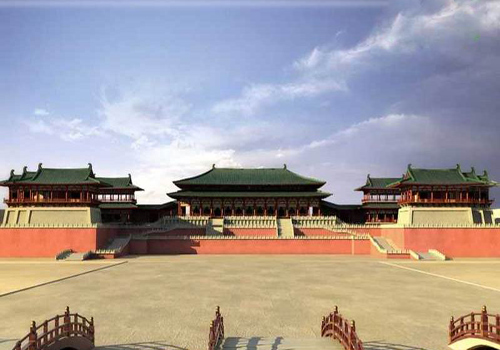 The Inner Court: It was the imperial garden area with scattering buildings, centered on the 16,000-sqaure-meter Taiye Pool or Penglai Pool. Linde Hall in the Inner Court where emperors of Tang Dynasty held banquets, watched performances and met foreign envoys. It relic site has been measured to be 130 meters in length and over 80 meters in width. Now the original floor plan of the hall has been recovered on its ruin. The rulers of Tang advocated Taoism and considered Lao Zi, founder of Taoism, to be their ancestor. Therefore, series of Taoist temples and palaces were constructed in this court.