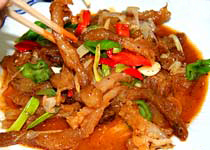 Tongren is mostly inhabited by a mix of ethnic groups including Tibetan, Hui, Han, Sara. The county seat, Longwu Town, is relatively prosperous with big and small restaurants providing Tibetan cuisine, Hui cuisine (Moslem cuisine), Sichuan Cuisine, etc. the only pity is there is little fresh vegetables. Tibetan take Roasted Barley Flour (糌粑) as their staple food which is usually served with Buttered Tea (酥油茶), dried milk. Hui people give priority to noodles and mutton. Stir-fried and Braised Lamb is a specialty of Tongren. The most famous food is the Sheep Tendons.--Stir-fried and Braised Lamb (爆焖羊羔肉)Stir-fried and Braised Lamb is a specialty on plateau. A lamb is slaughtered and skinned within 15 days after birth. It is diced and stir-fried in oil with pasta sauce, ginger powder, chili powders and salt. When the meat turns red, it will be braised with water. Tender, crispy, soft, this dish is just made to ignite your taste buds.

---Milk Skin (奶皮)Milk Skin is also called Dried Cheese. The preparation method involves boiling fresh milk and stirring it until soluble milk proteins aggregate and form a jelly at the pan. Then dry the jelly. It is simply mouthwatering.

---Sheep Tendons (羊筋菜)Sheep Tendons is a sheep leg ligament. After being straightened, dried in the shade back, they can be tied into small and preserved for a long time. Sheep Tendons is rich in collagen protein and much cheaper than sea cucumber and shark fin. It is an important food material in Tongren.