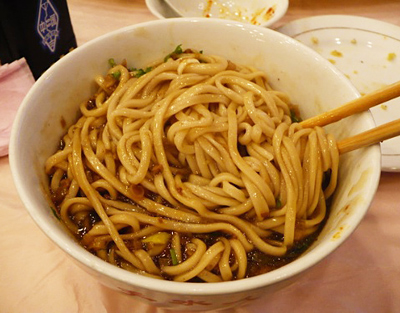 Most famous food of Tianshui are related to noodles, such as Gugu, Bean Jelly, Cold Noodles, Islamic shredded noodles, Brined Noodles, etc. there are a great variety of noodles, all tasty and appetite-increasing. The most popular gourmet place is called Tianshui Jianchang (天水箭场), which lies next to walking street in the downtown and actually a pedlars’ market. Nearly all kinds of snacks and noodles of Tianshui can be found there.

Buckwheat Gugu (荞麦呱呱)Gansu Province abounds in buckwheat, which is usually grinded into powders and later soaked in water. The starch of it is taken out and boiled into a thick layer of what is called often ''Gugu''. Gugu is the most favorable breakfast of locals. He who have not ever seen Gugu may be too stunned by its red color (covered with red chili peppers) to eat. But once he tried, he would keep reaching for more. It is said that Gugu was served as imperial food in Han Dynasty (206BC-220).

Millet Soup Noodles (浆水面)This kind of noodles takes millet liquid as soup with green onion and caraway and something else as seasonings. It is spicy, sour and aromatic. It is known to the world for its unique flavor, rich nutrition and refreshing effect.

Niang Pi Zi (酿皮子)It is presented almost in every alleys and streets of Tianshui. Visitors can find it in restaurants, stalls, and hawkers' carts. Excellent flour are rubbed into dough with water and repeatedly scrubbed so that its protein separates with starch. Separated protein is called ''Mian Jing'', which is steamed and cut into slices. The starch will be soaked in clear water until settled. Then it will be taken out and steamed. Prepared Niang Pi Zi was sliced and topped with sauce, vinegar, salt, chili oil and so on. It is widely-accepted because it can be served as staple food, dish and snack.

Fermented dessert (甜醅)It is a dessert with the flavor of wine. The preparation process involves husking wheat with grind stone, washing, boiling, air-drying, and fermenting with distiller's yeast for two nights. It is sweet and nutritious.

Islamic Diced Noodles (清真碎面)Half-boiled mutton is fried, and then simmered in water, added into sliced or diced seaweed, pickled tuber mustard, egg pie, shrimp and things like that. It is best savored when drenched with brine and sauce. With a tangy aroma, it definitely makes your mouth water.