As a famous ancient Chinese capital, Beijing is always a popular tourist city for spending Chinese New Year. And Chinese believes that you will infect some royalty-like luck by getting close to this prestigious royal city. Visiting temple fairs and the Great Wall are two traditional celebrating activities in Beijing to welcome the Spring Festival. In Beijing, temple fairs (Miao Hui), which are traditional cultural events featuring all kinds of Chinese folk activities, are one of the most important and grand activities during the Spring Festival. 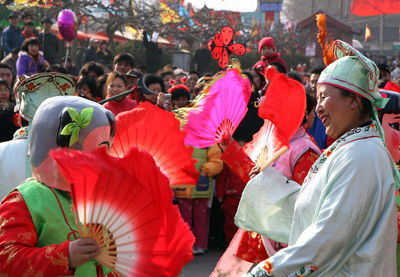 Beijing has several fairs during the Chinese New Year period. Since the fairs are held at various ancient temples, so they are called "temple fairs." Temple fairs, originated along with the development of Buddhist and Taoist activities, are a kind of mass gatherings that integrate religious worship, entertainment and commerce together.

The "temple fair" (Miao Hui) began as groups of vendors who did business near temples when many pilgrims came to pay regular tribute to the gods during traditional festivals. The practice grew, gradually turning into a regular event – temple fairs. Now temple fairs are an important and joyful destination for Chinese people during festivals, especially during the Spring Festival, or Chinese New Year.

The temple fairs in Beijing dates back to around 1000 A.D., when they were called "Spring Outings", steadily booming throughout the following three dynasties of the Yuan, Ming and Qing emperors. Nowadays, going to temple fairs has become a Spring Festival routine for residents of Beijing. 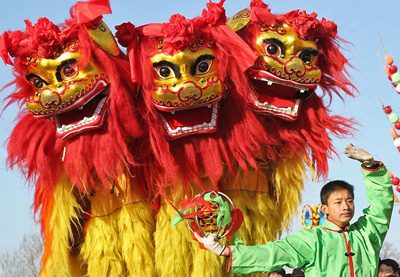 Temple fair is definitely a traditional cultural experience, because it shows Chinese culture from a very detailed perspective. Delicates, folk flower show (a generic term of entertaining activities) and feat are important part of the temple fairs. As for the performances, there are Dragon and Lion Dance, Stilt Walk, Boat-bowing on Land, etc. And feat including the Zhongfan Flag Play, Peep Show and Double Reed can also be appreciated. While enjoying the samplings of Chinese delicacies, you can appreciate craftsmanship and artworks displayed by local artisans.

In Beijing; two temple fairs that enjoy an especially long history and popularity are the Baiyunguan (White Cloud Temple) Miaohui and the Ditan (Temple of the Earth) Miaohui. The former is the largest Taoist temple in Beijing and the headquarters of Chinese Taoist Association while the latter is an altar where ceremonies were held to honour and worship the God of Earth.

Taking part in temple fairs might be quite enjoyable. For detailed arrangement of the temple fairs in Beijing, please check relevant and up-to-date information before Chinese New Year Festival.