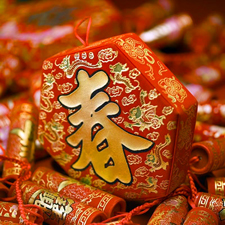 There is a popular legend about the coming of the Spring Festival. In oral Chinese, we call Spring Festival “Guo Nian”. Guo means "pass over" and Nian means "year". It is said that there lived a horned monster named Nian that was extremely ferocious in ancient China. Nian lived deep at the bottom of the sea all the year round and climbed up to the shore only on night of New Year's Eve to devour the cattle and kill people, so people always hided themselves in the house before the sunset. But in one year unexpectedly a long-whisker old man in red came to the village on the Eve. Nian appeared as usual and blustered, suddenly frightened by something crackle - that was firecracker set by the old man. Seeing the old man’s red clothes and hearing the crackle, Nian fled back to the sea as soon as it could. After that, people knew that Nian was scared of the color of red and firecrackers. Hence, on the Eve of very year, every family wear in red, stick red couplets, hang red lanterns, setting firecrackers and beat drums and gongs to scare Nian until the midnight passes. From then on, Nian did not dare to come to the shore any more. Year after year, it developed into a festival and became finally became a most important festival for Chinese. 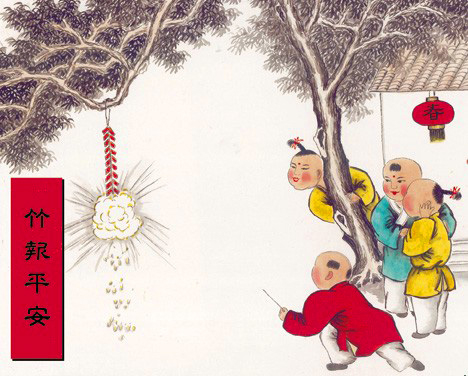