Tour Overview:The tour covers the two famous ancient capitals and one modern metropolis. Beijing is so rich in Chinese culture and heritage sites, e.g. temple fairs, Great wall, Forbidden City and Summer Palace. Xi’an used to be the capital of 13 dynasties in Chinese history, well-known for the incredible Terracotta Warriors and Horses. These two cities will bring you a feeling of getting back to ancient China when you enjoy the Spring Festival time. The tour will ends in the biggest metropolis of China – Shanghai.

Transfer via:International Flight on your own arrangement

Upon your arrival, our local guide will meet you and escort you to your hotel. Then you will spend the rest of the day exploring the nearby streets, or resting and catching up on your jet lag. Beijing is a city of amazing contrasts – an ancient capital with incredible historical sites as well as a bustling modern metropolis. 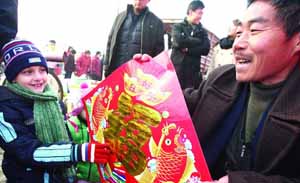 Today we will take a Beijing highlight city tour. In the morning, we will join with local people who practice Tai Chi Chuan at the Temple of Heaven before breakfast. You can have a try if you like or just watch. The Temple of Heaven, built in 1420A.D, is the place where emperors of the Ming and Qing dynasties offered sacrifice to God and prayed for good harvests.

Then we will go on visiting Tiananmen Square, the biggest square in the world that lies in the center of the city and can hold about one million people. It's the symbol of Beijing and is ranked as the No. 1 among the 16 new scenic highlights of Beijing. Then you will have the privilege to experience ancient emperor's daily life. In the afternoon, we will visit the Forbidden City, in which the emperors of the Ming and Qing dynasties governed for over 500 years. It is the essence as well as a must for sightseeing in Beijing; the magnificent and solemn palaces can arouse your imagination of the ancient Chinese emperors’ life.

In the evening you will be transferred to the Liyuan Theatre to enjoy Beijing's spectacular Peking Opera Show.

Today we will depart from your hotel after breakfast and spend about 1.5 hours transferring to the surrounding countryside to visit the Badaling Great Wall, one of human being’s remarkable feats built over 2,000 years ago. You can climb and walk on one of the best preserved sections of the ancient wall, admiring the splendid mountain scenery.

After having lunch at a local restaurant, we will continue to visit the Ming Tombs, the resting places of Ming Dynasty’s thirteen emperors and their splendid treasures. Passing down the Sacred Way, a road lined with statues of dignitaries as well as huge elephants, lions, camels and horses, we will see the marble tombs of the Ming Dynasty emperors and visit one of the spectacular tombs – Dingling.

Later you will be transferred back to Beijing city. On the way back to your hotel, you will be transferred to visit the main 2008 Beijing Olympic venues to take an exterior visit of both the Beijing National Stadium (Bird's Nest/Olympic Stadium) and the National Swimming Centre ('The Water Cube'), and feel free to take some photos of the stadium In the evening, enjoy the famous Peking Duck Banquet for dinner.

Afterwards we will make a walk through Seven Star Park. It is one of the best urban parks in China. The park is in the east bank of Lijiang, the largest park in Guilin with the theme of rock caves.

We’ll continue to visit Fubo Hill. You will see lots of rock stone carvings & Buddha statues from since Tang Dynasty. If you climb to the summit, you will have a wonderful bird's-eye view of Guilin city.

In the evening, you will have the highlights to visit a local family. Stay with the family and learn how to make dumplings, then have the united dumplings dinner for the Spring Festival’s Eve. 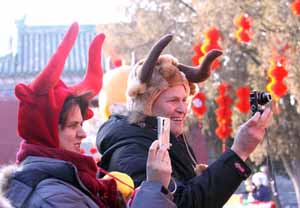 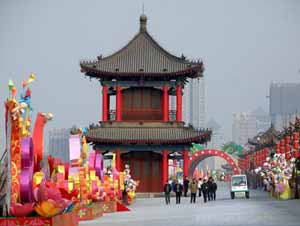 After breakfast in the hotel, we will set off for the incredible 2000-year-old Terracotta Warriors and Horses. It is the greatest archaeological findings of the century: the army of terracotta warriors and the bronze chariots entombed in vast underground vaults of Emperor Qin's tomb. More than 7000 figures in full battle array are formed for battle in several large pits. This is a mummy tour in China instead of Egypt.

Then we will continue to the Big Wild Goose Pagoda where Famous Buddhist Master Xuanzang (Monk Tripitaka) stored his well-preserved collection of classic Buddhist artifacts brought from India in Tang Dynasty.

Later we go on to visit the Bell Tower, a 36 meters (118 feet) high wooden tower which is the largest and best-preserved of its kind in China.

This evening you will enjoy a very spectacular and elaborate Tang Dynasty Show with traditional Chinese dance, music and beautiful Chinese girls in Tang-style dress.

Today you will experience a half-hour's hike along the Ancient City Wall. It is the largest and best-preserved ancient city wall in China today and is probably the best military battlement in the world. You can rent a bicycle for a ride along the top of the 1000-year-old city wall.

Then we continue to drive to the Great Mosque of Xi’an, the largest and best-preserved old mosque in China. It was built primarily in the Ming Dynasty when Chinese architectural elements were synthesized into mosque architecture facing Mecca with its courtyard from east to west. This is the sacred place for Silk Road traders and travelers to worship Allah. It is a popular tourist site of Xi'an and is still used by Chinese Muslims (mainly the Hui people) today as a place of worship.

In the evening you will fly to Shanghai. Arriving in Shanghai, you will be met and transferred to hotel by our local guide. Then you can take your time walking along the Bund and the Nanjing Road for relaxation. 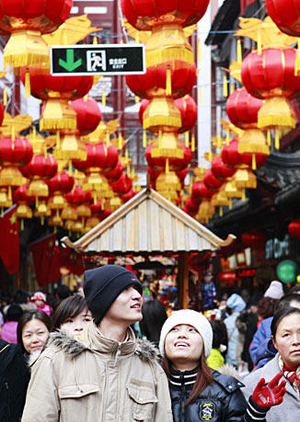 Today we will start the day with a visit to Shanghai Museum. It is the biggest museum in China, with a collection of over 120,000 pieces of Chinese art & cultural relics. It is especially famous for its treasures of bronzes, ceramics, paintings and calligraphy.

Then we will head to the Jade Buddha Temple, the old-time and classical architectural style makes the temple unique and inimitable in this world-famous metropolis. Both the Sitting Buddha and the Recumbent Buddha are carved with whole white jade. If we are lucky enough, we can watch the monks holding a Buddhist ceremony in a side room.

After lunch, we will visit the Oriental Pearl TV Tower, the highest TV Tower in Asia, creating a picture of “twin dragons playing with pearls”. The entire scene is a photographic jewel that excites people’s imagination and attracts thousands of visitors all year round.

Then we will take a relaxing walk to the lovely Yuyuan Garden, which was finished in 1577 and is the most beautiful garden by the south of the Yangtze River. Wandering in the area of Yule Pavilion and Wanhua Chamber, you will find pavilions, corridors, streams, courtyards as well as many other natural feature.

Later we will walk to the Town God's Temple. Old City God's Temple is a major yet relatively inactive, Taoist temple in Shanghai. A spring temple fair will be open in the Town God’s Temple Square. Various old works of art and all kinds of folk performances are staged to show the traditional Shanghai flavor.

Note:
The above price are in US dollars, for one person. Based on twin share. Price are for reference only, may vary during special holidays, conference.

VisitOurChina converts Chinese RMB to US Dollars at a rate of RMB 6.7 = US$1 for our quotations. VisitOurChina currently quotes tour prices in US Dollars on our web site to give you an idea of the tour cost and quote in RMB to you at the time when you are making bookings.

Are you interested in this tour? Send us a message and let us help you plan and arrange a China vacation based on this itinerary. Tour detail is flexible upon your requests. Response within 24 hours during the working days. Contact our Travel Consultant is for free. Inquiry This Tour

All the tours in China is available here, you can customize a own tour step by step here.

We also recommend some similar tour packages based on the above itineraries. They will extend your tour and take you to other exciting parts of China.