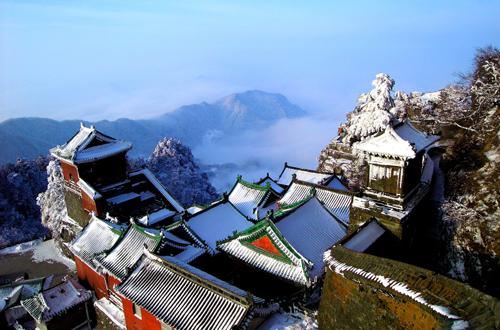 Laohekou airport, located between Xiangyang city and Shiyan city, is about hundreds of kilometers away from Shiyan city, and it takes you no more than thirty minutes to reach from the airport to Wudang Mountain. Flights from Laohekou to Beijing, Shanghai and Guangzhou are also available.

Many trains across China pass through Shiyan city. You can leave for Beijing, Shanghai, Shijiazhuang, Zhengzhou, Chongqing, Qingdao, Wuhan, Xiangfan and other large and medium cities.

Shiyan railway station - it is located on the No. 11 Chezhan Road.

Hubei province enjoys relatively complete road system. So far, you can leave Huangmei County for Wuhan by way of Huangshi, and you can also leave Wuhan for Yichang by way of Jingzhou. Moreover, highways of Wuhan – Xiangfan – Shiyan, Wuhan – Xinyang and so forth are under construction.

Shiyan central passenger bus station – it is located on the No. 1 Renmin South Road, Maojian district.

Shiyan Nan passenger bus station – it is located on the No. 6 Chezhan Road, Maojian district.

Shiyan harbor, or Huanglong harbor, is located in the northwestern part of Shiyan city, at the middle and lower reaches of Duhe River. Hanjiang water way connecting Yangtze River and Shanghai, pass through Shiyan city.

By bus – there are 23 bus routes crossing the city, so you can reach almost main streets of the city by bus.

By taxi – the starting price is six yuan for 2.5 kilometres.