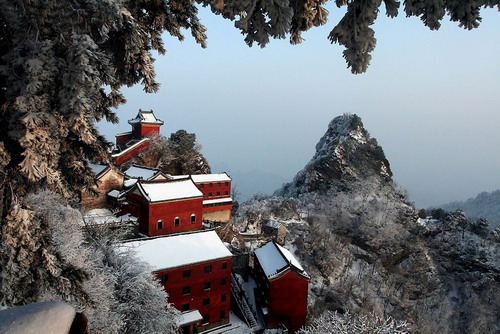 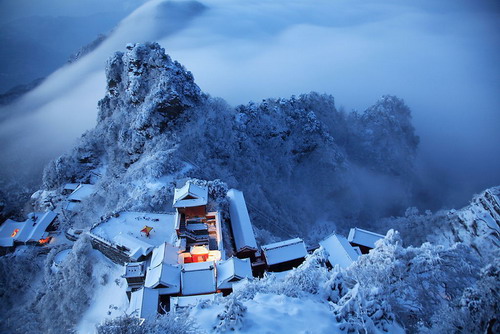 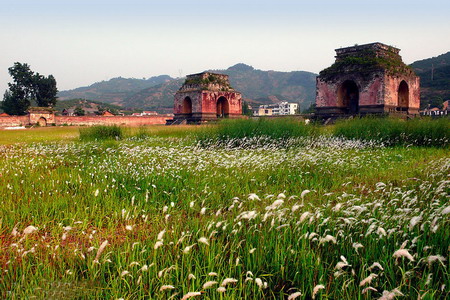 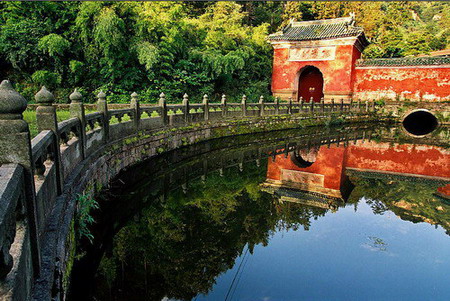 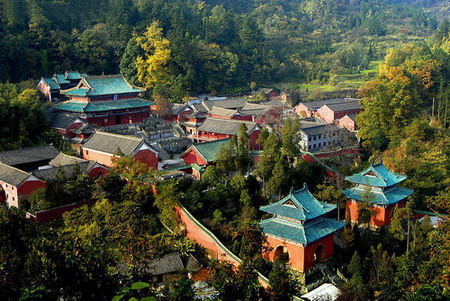 Chinese name: 武当山 (Wudang Shan)
Location: In Danjiangkou City, Shiyan City, Hubei Province.
Admission fee: 215yuan.
Opening time: 07:00-17:00.
How to get there: - By bus from Wudangshan Town to Wudang Mountain;
- By environmental friendly sightseeing bus to tour around the scenic area;
- From Qiongtai scenic area to Golden Peak, nonstop sightseeing cable cars are available.
Best time to visit: Spring and autumn. In spring, there is temple fair on 3rd March of lunar year; in autumn, there is Wudang International Tourism Festival.
Recommended time for a visit: two days.

Wudang Mountain which used to be called Taihe Mountain is one of the well-known Taoist sanctuaries in China, covering an area of more than 77,000 acres. Bordering famous history city Xiangfan city in the east, downtown of Shiyan city in the west, Shennongjia Forestry District in the south, and Danjiangkou reservoir in the north, Wudang Mountain has been inscribed in the list of world heritage site by UNESCO. In the meanwhile, it is the key scenic area of China, the renowned Taoist Mountain, and the birthplace of Wudang chuan (武当拳) - one of the current martial arts in China. 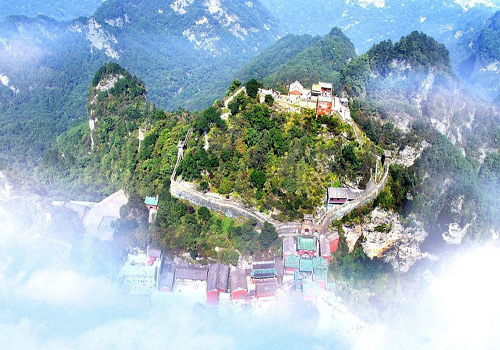 Not only does Wudang Mountain boast gorgeous natural landscapes, but also diversified human landscape, thus being heralded as the first mountain for the immortal unparalleled by any others. It is as magnificent as Mount Taishan, as precipitous as Huashan Mountain; moreover, it is unique in its own way with multitudinous ancient architectural complex. Since the dawn of the time, Wudang Mountain has been the ideal place for Taoist priest to pursue.

The full name of it is Yuxu Palace of Heavenly Upper Emperor (玄天玉虚宫). In Taoism, yuxu refers to the dwelling of the Jade Emperor (玉帝). Yuxu palace is one of the largest palaces among the Wudang architectural complex. First built in the Yongle Period (1403-1424) of the Ming Dynasty, the palace had its cities one enclosing another, so there were three, that is, Waile City, Lile City and Zijin City. The existent architecture relics include two palace walls stretching 1036 metres, two pavilions housing tablets, bases of five halls in the Lile City, Fumu Hall, Yuntang, Tianmen, East Tianmen, North Tianmen and the like. It is worth visiting in that they can stun your souls from time to time.

To date, Yuanhe Temple is in possession of 37 surviving architecture, covering an area of 1479 square metres. In the past, it served as a prison to punish those Taoist priests who broke Taoism rules. The temple has a concentration of statues and utensils for sacrifice, most of which are gold copper. The best-preserved wood carving –True Warrior Grand Emperor Statue – in Wudang Mountain and any other rare statues are worthy of study and appreciation.

Yuzhen palace is also called Loess City. It is notable for its golden copper Zhangsanfeng statue, the founder of Wudang Sect. As a rare work of art, the statue was destroyed by fire on 19 January, 2003. 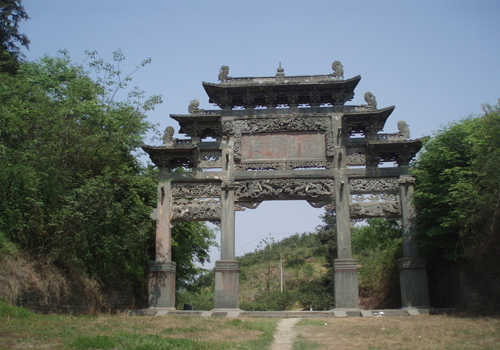 The first gate visitors will enter is Xuanyue Gate; once you step into it, you are on the way to Taoism Mecca. Built in the Jiajing Period (1522-1566) of the Ming Dynasty, the gate is 20 metres high, 12.81 metres wide with the four characters "治世玄岳" written on the memorial archway by Jiajing Emperor. In the year of 1998, the stone memorial archway was inscribed as the national key preservation site. For your information, the road from Xuanyue Gate to the Golden Peak is called "Wudang Divine Road", along which you can appreciate most of the attractions of Wudang scenic area.

This compact architecture is also known as Chunyang Palace. The existent one was reconstructed in 1852 and renovated in 1984. Fifty rooms are available, covering an area of 1700 square metres. A well is also in sight, above which an iron statue of a senior mother was enshrined. She is always smiling at the travelers!

It refers to the three temples on Qiongtai, that is, upper temple, middle temple and lower temple, each having a very lovely name.

The upper temple is Bai Yu Gui Tai (白玉龟台), middle temple Zi Yue Qiong Tai (紫岳琼台), lower temple Yu Yue Xiao Tai (玉乐霄台). In history, twenty-four Sanctuary of the Tao were built in accordance with the mountain ranges, connected by pavilions and bridges. It is so ingenious that people going back and forth will not have their shoes getting wet in the rainy days. The imposing architecture boasts statue of Heavenly Upper Emperor in the upper temple, 14 stone palaces, main hall and wing rooms in the middle temple, 13 main hall and wing rooms in the lower temple. 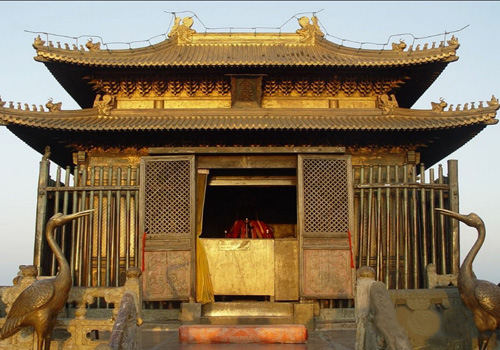 Located on the main peak of Wudang Mountain - Tianzhu Peak (天柱峰), and  constructed in the Yongle Period of the Ming Dynasty, it is the largest golden copper hall around China. 5.54 metres tall, 4.4 metres wide, 3.15 metres deep, the hall with unventilated structural parts has the golden copper statue of Heavenly Upper Emperor enshrined, which is as heavy as over ten tons. What is magic is that the hall is a good conductor itself. When thunder and lightning hit it, you can find spark leaping around, but the hall still remains intact. Amazing, isn’t it?

Taizi Po, also called Fuzhen Temple, is situated beside the main road for ascending. It was said that the oldest son of an emperor had cultivated himself according to Taoism doctrine at the age of 15. Its layout is basically follows that of Scriptures of Heavenly Upper Emperor. Covering 2000 square metres, Taizi Po is a relatively bigger architecture complex, including Zushi Hall, Longhu Hall, Huangjing Hall, Wuyun Builing, Taizi Hall. And Taizi Hall is the best place to overlook the Golden Hall. 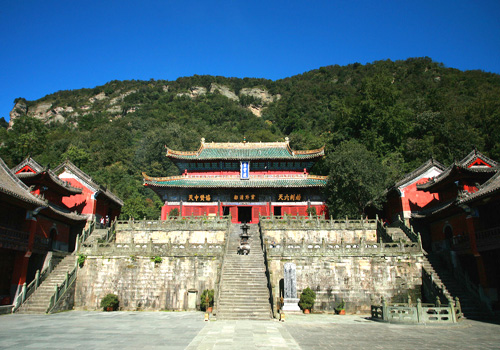 It is the administrative office of Wudang Taoist Association. On March 3rd and September 9th of the lunar year, Taoist rites are observed here. First built in the Song Dynasty (960-1127) and renovated in the Ming Dynasty (1368-1644), the palace is the only wooden structure of irimoya with double-eaves. The major attractions are Longhu Hall, Shifang Hall, Zixiao Hall, Fumu Hall, Taizi Cave and so forth. Clay statues of a dragon and a tiger are guarding the Longhu Hall (龙虎殿); a hundred staircases can lead to the main hall – Zixiao Palace, behind which statues of Heavenly Upper Emperor’s parents are enshrined.

Nanyan, at the same time called Zixiaoyan, takes its name from the location of facing the north. It is the perfect combination of natural landscape and human landscape. Of the nine palaces, Nanyan Palace enjoys the most flexible layout, compact and various. Its Nanyan Stone Hall, standing on the cliff, 6.6 metres deep, 6.8 metres tall, is the existent largest stone hall in Wudang Mountain. To a great extent, it is a masterpiece embodying the wisdom and superb skills in that it was constructed with heavy stone on precipitous cliffs. 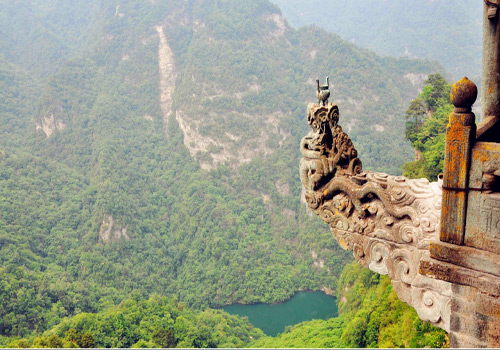 Whenever visitors come here, most of them will be amazed at the vivid carvings of the two twisting dragons swallowing a fire ball.

It is so deep and tranquil that it has become an ideal place for Taoist priests to cultivate themselves. As early as in the Song and Yuan Dynasties, the architecture had already been existent; halls were erected in the Ming Dynasty. A stone architecture looms up through dense forests, that is, the remarkable lectern in Wudang Mountain, where Chinese Taoist Chen Chuan used to give lectures and wrote books. If you have ever read Journey to the West, you can recall the detail of Brother Monkey Makes Trouble on the Black Wind Mountain in chapter seventeen, in which Lingxu Cave is mentioned.

It is located at the foot of the Five Dragons Peaks, west side of Tianzhu Peak of Wudang Mountain. It is one of the eight earliest architecture of Wudang Mountain scenic area. Through efforts of several dynasties, the palace is now holding 85 temples. 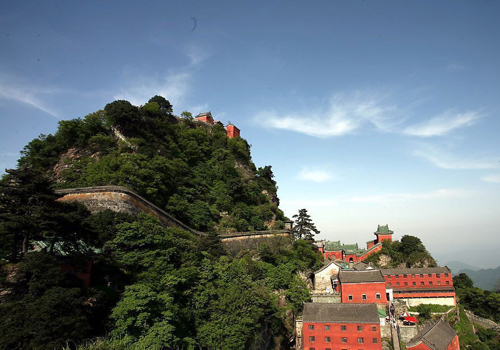 Standing in the Chaotian Palace, you can overlook Nanyan Palace and look up to Tianzhu Peak. During the rainy season, waterfall splashes like the Milky Way, while in winter, it looks like a white silk hanging skyward. At that time, you cannot help giving an exclamation.