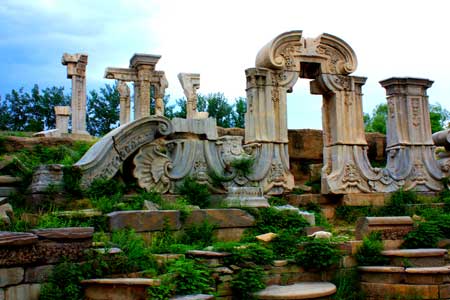 At the current site of the Yunamingyuan,or the "Old Summer Palace" of Beijing, it's hard to imagine the area and its treasures in their original glory. Since the palace's destruction by the united armies of Britain and France in 1860, the imperial gardens have been known primarily as a forest park, but thanks to a large-scale restoration effort currently underway at the park, visitors to the area will be able to get a new view of the palace's storied history.

150 years after the garden's razing, the China Culture Relics Protection Foundation and the School of Archaeology and Museology are now mounting a large-scale restoration effort that will unveil several artifacts to the public for the first time and even give visitors a first-hand glimpse of the restoration process.

Getting to close relics

During the Qing Dynasty, the emperor Kang Xi presented the impressive, 3.4-square-kilometer gardens as a gift to his fourth son, Yong Zheng, in the early 18th century. In the years following, it was expanded and rebuilt several times until it was ransacked and burned in 1860. Although the emperor Tong Zhi planned to rebuild the palace, the financial burden prevented him. Not long after, it was again ransacked by the Eight United Army in 1900.

But from June 8 to October 18, the cultural relic restoration will be held seven days a week from 9 am to 5 pm. Through a window, visitors will be able to observe the ongoing process as experts restore excavated artifacts, and, in a separate interactive zone, they will even be able to experience the excavation process for themselves as experts instruct them in how to dig for and restore buried replicas of artifacts.

First show of the unknown

"This is the first restoration of the remains excavated in the palace on such a massive scale," said Qian Qian, the deputy secretary general of the science and technology protection foundation. "Also, some cultural relics displayed this time have never been shown to the public before."

In the exhibition zone, the palace's 300-year history will be presented through the remaining manuscripts, copper panel paintings and old pictures. According to Qian, the manuscripts are mainly drawings of the palace's 40 inner settings by royal paint-ers. Approximately 200 cultural relics have been selected for this exhibition due to their representative value, rarity and potential for restoration.

The current exhibition focuses on portable items like pottery, most of which were made during the heyday of the palace under the rules of emperors Kang Xi, Yong Zheng and Qian Long, and they reveal a lot about life in the palace for the royal family, concubines, eunuchs, and even ordinary staff. "People usually think that everything here belonged to the royals, concubines and eunuchs," said Qian. "But some relics were for wedding use, and indicate that the ordinary staff in the palace could also get married."

Ordinarily, the restoration of excavated artifacts includes repairing breaks, making molds and reproductions, and restoring the original color and glazing. Additionally, a reversible process has been introduced that makes it possible to decompose glue used to restore a relic if more advanced restoration processes are developed in the future.

The current exhibition is being held to commemorate the original destruction of the gardens and to tell the story of the palace. But because of that history, not all of the items will be restored, according to Qian. The largest symbols, like the ruins of Dashuifa, the Grand Waterworks destroyed in 1860, will remain as they are. "Its current condition is the result of that part of the history, so for that reason no big restoration will be adopted on it," she said.