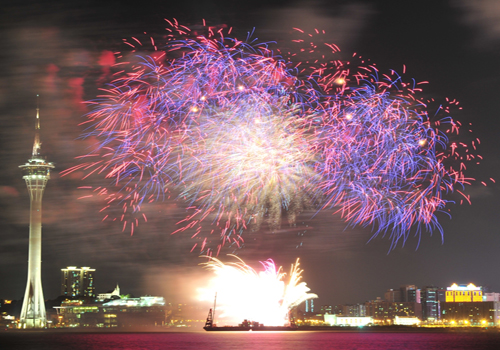 on the Macao Tower shorefront from Sept. 14 to Oct. 1.

Fall is widely regarded as the best season to visit Macao.

In the fall, the climate there is mild, and the special administrative region hosts a variety of cultural and sports activities.

One of these activities is the 25th Macao International Fireworks Display Contest, an event for which the local authorities advise tourists to "prepare to feast their eyes when Macao's skyline bursts with vibrant colors".

The Macao International Fireworks Display Contest - acclaimed as one of the best of its kind - takes place on the Macao Tower shorefront from mid-September to October 1 every year.

On Sept 14, 19, 21, 28 and Oct 1 this year, a total of 10 fireworks teams from around the world, including China, Spain, South Africa, Switzerland, South Korea, Portugal, Australia, Italy, Canada and France will perform in this extravaganza of color, noise and light.

The last outing featured the two leading teams together in a dramatic and dazzling finale.

The year 2013 marks the 25th anniversary of this spectacular public event.

Started in 1989, the contest is an annual event that celebrates the achievements of the traditional Macao firecracker industry, as firecrackers were once one of Macao's three best-known handicrafts.

Thousands of visitors choose this time to come to Macao to enjoy an exotic holiday illuminated by spectacular displays in the night sky that can be seen from many vantage points on the Macao Peninsula and Taipa Island.

Starting last year, to add to the enjoyment of spectators, the fireworks performances were accompanied with a laser show, creating a marvelous spectacle of light and sound.