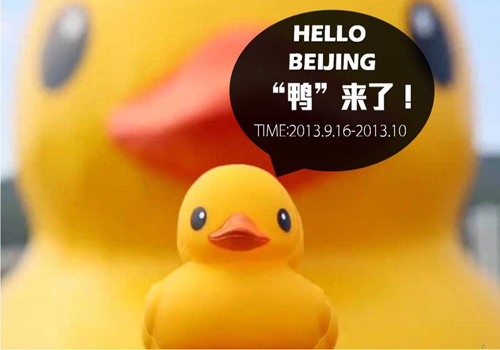 The promotional poster for the Beijing Rubber Duck. [Photo: Sina.com.cn]

According to the Beijing Design Week Committee, the Rubber Duck will arrive in Beijing on September 16 and stay until October 17. As for the recent rumors that the Rubber Duck would land in the Summer Palace, the committee claimed that they never released such news, and that they would announce the ultimate selected address for the Rubber Duck shortly.

The waters in the central region of Beijing within the third ring road were previously reported as the location of the coming rubber duck attraction. However, according to Zeng Hui, the Deputy Director of Beijing Design Week Committee, they took into account traffic and security considerations, and decided to choose a new location outside the third ring road. The Summer Palace, Chaoyang Park and the Olympic Forest Park are the three most favored "candidates" at present.

After changes to the original plan, Shichahai will now be the location for all "Rubber Duck"-related subsidiary activities.