Your Position: HomeChina NewsLuoyang and the Silk Road

Luoyang and the Silk Road 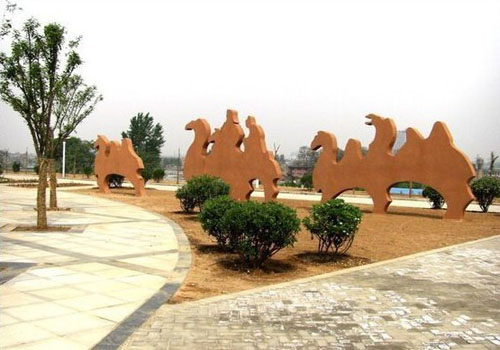 The desert camel teams from the Northern Tribes in ancient China trekked through thousands of miles of Gobi Dessert to trade in Luoyang and bring Chinese products home. The expansion of the Silk Road not only contributed to product exchange, but also opened a door for communications between the east and the west.

The Silk Road Park is located in the estuary of the Chan River and Luo River with a total length of 1.67 kilometers from east to west. After crossing the beautiful Luo Pu Zhu Ying Bridge, one can see two lofty watchtowers in Han style. They stand solemnly at both sides of the mountain gate and embody the charm of the Han culture. Wandering around in the garden, tourists can find bricks on which bearing pictures of Hu musicians. From the picture we can see the Hu musicians moving forward slowly on their camels. This scene is so vivid that we even can feel the beautiful music from the remote desert and walk through the dust-laden history to arrive at the Silk Road.

There are six themed cultural squares in the park, namely the Diplomatic Mission of Ban Chao, the Silk Road, the Governor in West Regions, the Silk Road Trade Route, the White Horse Carrying Classics, and Xuan Zang's Journey to the West. With statues, maps and literary illustrations, the garden perfectly displays the prosperous times of the Silk Road.

After entering the gate, the lofty embossment of the Diplomatic Mission of Banchao comes into view. The embossment is 16 meters wide and 3.7 meters high. On the upper part one can see undulating mountains and placid clouds, while mighty knights and beautiful girls are vividly portrayed on the lower part. The total embossment is made up of three parts, and displays the story of envoy Ban Chao from left to right.

The square of the Silk Road is Romanic in style. A delicate Four-square Pavilion stands at one corner while a gigantic cocoon-shape structure with many beautiful golden leaf privets stands in the center of the square,. Alongside the road there are six big stones, on which the words Shanshan, Khotan, Yanqi, Qiuci, Shule and Shache are sculpted in sequence from east to west. These are 6 main countries which Ban Chao visited. A former scholar, Ban Chao renounced academia and joined the army. He helped more than 50 countries in the western regions escape control by the Hu and pay allegiance to the Han dynasty.

Alongside the road to the east is the square of Governor in West Regions. In the beautiful day of winter, one can see the dreamlike, mysterious and stylish blue-domed corridor even from afar. Together with creamy walls and snow white pillars, the three features make for a fascinating scenic line which point tourists to an exotic destination.

The most eye-catching sight on the square of the Silk Road is a 24-meter-long, 4-meter-high Silhouette Wall displaying a Hu man riding a camel. With the sound of camel bells, there appears a trekking camel team on the Silk Road, in which a long-nosed man sits on a camel with a melancholy expression. This is what it looks like about the trade in the ancient times.

In the Square of the White Horse Carrying the Classics, tourists can see the gate of White Horse Temple standing solemnly on the square; opposite this, an Indian-style pagoda towers at a distance. They temple represents the White Horse that carried the Buddhist Classics from Remote India to the Capital Luoyang. In front of the mountain gate, a tame horse strides with a huge pile of classics on its back as if it had just come back from the West Regions.

At the very east side of Silk Road Park, we can find the last square---the Square of Xuan Zang's Journey to the West. After the introduction of Buddhism to China during the East Han Dynasty, different schools of Buddhism which were in great divergence appeared. Meanwhile, the Buddhism manuscripts were not complete. In order to solve these problems, Xuan Zang decided to travel west in search of the authentic Buddhism Classics to unite all the schools in China. Xuan Zang spent 17 years traveling on the Silk Road for a total distance of 25 thousand kilometers across hundreds of regions and states, enduring innumerable trials and hardships, before Xuan Zang finally attained the real Buddhism script to bring back to Chang'an. During the following 20 years, Xuan Zang has profoundly contributed to the transmission of Buddhism by translating more than 75 Buddhism Classic scripts.