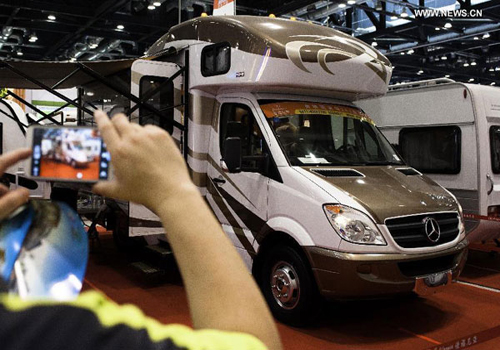 (A visitor takes pictures of an RV at the Beijing International Tourism Expo (BITE) 2013 in Beijing, capital of China, June 21, 2013. The BITE 2013 kicked off on Friday, attracting 887 exhibitors from 81 countries and regions. ) [Photo: Xinhua/Liu Jinhai]

The summer is arriving, and that indicates it's time to head outdoors and fire up the barbecues. These days, some Chinese are opting for family trips in "recreational vehicles", or RVs, which are fast becoming an affordable holiday option. But the development of the RV industry in China still faces difficulties.

Recreational Vehicles or RVs have been available in the Chinese market for about 2 years, but for many Chinese people, they still have no experience of traveling in such a vehicle.

"Recreational Vehicles are like an extension of Rolls-Royce cars. I saw them in Australia, but I rarely see them in China."

"I only see American branded RVs in American TV series. In China, I heard there is a campground for RVs, but I've never been there. But I think it would be a great experience to travel in an RV. But RVs are really expensive; I wouldn't buy one for personal use."

A recreational vehicle normally includes a kitchen, bathroom, and sleeping facilities. RVs are defined as motor vehicles and are intended for brief leisure activities such as vacations and camping.

Li Haitao, chief manager of the R&D department at Xinkai Automobile Group Co., Ltd in Beijing, is in charge of renovating the interior of RVs. Li believes that RVs provide a unique experience to those that use them.

"When living in a recreational vehicle, you can change the views outside the window at a moment's notice. When I stay at a campground, I can enjoy the sea or the mountains; I even can take a view of the desert. But at home, I'm faced with the same scene day after day."

In recent years, a growing number of RV enthusiasts in China have formed their own travel clubs. And with roads, traffic and service conditions improving, campgrounds with water and electricity hook-ups are becoming more common in some cities. But Li says there are still some challenges facing RVs in most Chinese cities.

"One of the issues is the campground facilities, because there are several factors that need to be considered, including views, environment and the general convenience of the site. And lots of related infrastructure and facilities like stores and gas stations should also be built around the campground. Another issue regards the need for decent roads in many parts of the country, because this kind of vehicle is often longer and larger than regular cars."

Li also points out that driving an RV to travel alone can be dangerous.

"Fuel is the most important thing for an RV. A full tank of oil can run for about 400-600 km., but if the fuel runs out, the functions of the RV will stop working."

In China, the RV market is quite small compared to that of North America. At present, there are about 10,000 RVs and 100 campgrounds across China and an estimated 1,000 RVs are sold annually.

Li says that China is a developing market with an expanding middle class. Even though many Chinese people would not purchase an RV outright, renting a recreational vehicle or going to a campground to stay in an RV could be just some of the methods which could promote the RV industry and tourism in the future.