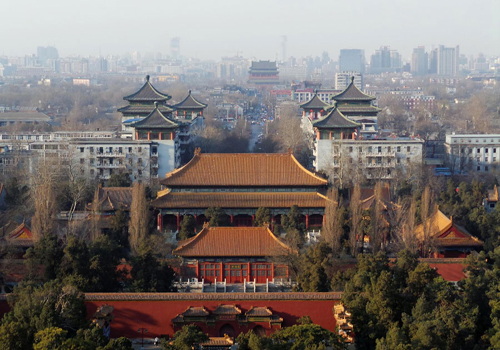 (The top of Jing Hill Park gives visitors a bird's eye view of Gulou Avenue, located to the north of Beijing's central axis.[Photo/Xinhua])

Beijing’s central axis extends from Yongdingmen in the south, and stretches northward to Zhengyangmen, Damingmen (famous as Daqingmen during the Qing Dynasty, Zhonghuamen during the Minguo period, and later dismantled), Tiananmen, Wumen, Taihemen, Taihe Palace, Zhonghe Palace, Baohe Palace, Qianqingmen, Qianqing Palace, Kunning Palace, Shenwumen, Beishangmen, Wanchun Pavilion of Jing Hill, Shouhuang Palace, Dianmen, and ends at the Bell and Drum Towers. The central axis runs 7.8 miles in total and covers the Outer City, the Inner City, the Royal City and the Forbidden City. With the axis as the central line, Beijing is structured symmetrically like a chessboard.