The Third Session of the Pinggu  Lantern Festival celebrations kicked off on February 24 in Beijing. Accompanied by 26 beautiful flower parades, 60 teams put their best performing foot forward by staging both traditional and modern dances, and athletic performances. 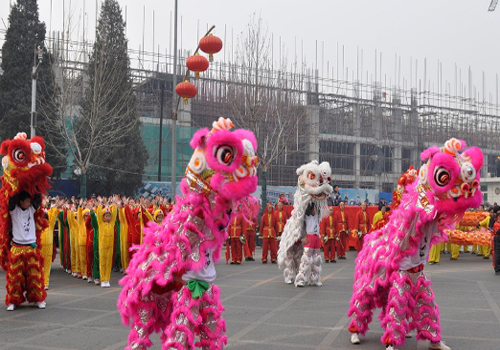 (The Third Session of the Pinggu Lantern Festival celebrations kicked off on February 24.)

Being an international celebration, it has attracted foreigners from dozens of countries. Although the weather wasn't too good, the celebrations attracted thousands of local onlookers.

The celebration consists of three parts: Amused Pinggu, Beautiful Pinggu and Happy Pinggu. Based on deep cultural deposits, it showcased various kinds of intangible cultural heritage, such as the 1000-year-old lidi yangko (a popular rural folk dance), the Big Drum in Zengzhuang and stilt walking. The grand performance consists of 5000 people, including dancers, students, teachers and aged citizens.

The 26 parade vehicles representing different counties form another highlight of the celebration. With colorful decorations and unique design, they channel the true characteristics of these small towns and counties.

Audiences were taken by the excellent performances and the applause and cheers lingered until the end of the celebration.