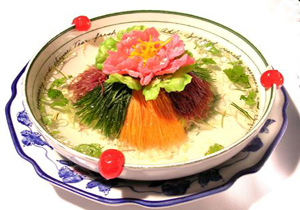 Luoyang food, with a long history boasts rich assortment, ranging from well-known "descendants from royal family” - Luoyang Yan dish, originally from palace, to Carp dish that enjoys great popularity in the folk, to delicate Bufan Soup, to delicious Zhangji Roasted Chicken. Dwellers in Luoyang are fond of soup; therefore, one of the features of Luoyang food is that it is rich in soup. And all varieties of soup have become the most common snacks in the street, such as Bufan soup, Hula soup, beef soup and so forth.

As a matter of fact, Luoyang Water Banquet is of most distinguishing characteristics, and you cannot miss it when visiting Luoyang! Water banquet, literally means each hot dish is made up of soup; on the other hand, it mean hot dish is served one after on, which resembles flowing water.

It is not only the most common local food in Luoyang, but also one of the well-reputed snacks around China. The most distinct feature of paste noodle is easy digestion. First, heat up the black soybean milk or mungbean milk, and then add sesame oil to it. When it is boiling, put noodle in it and stir it unceasingly before seasonings including salt, chopped green onion, petits pois, celery, Chinese chives and pepper are dropped into it. There exists a special way to enjoy the noodle, that is, the longer it keeps on alternate day, the better it tastes.