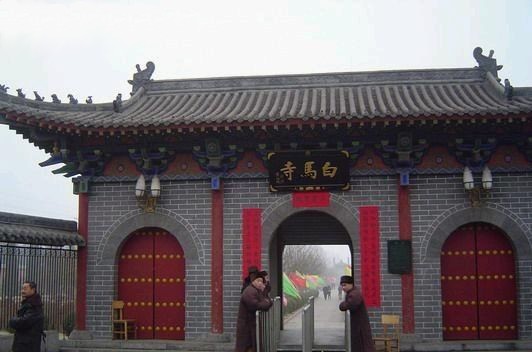 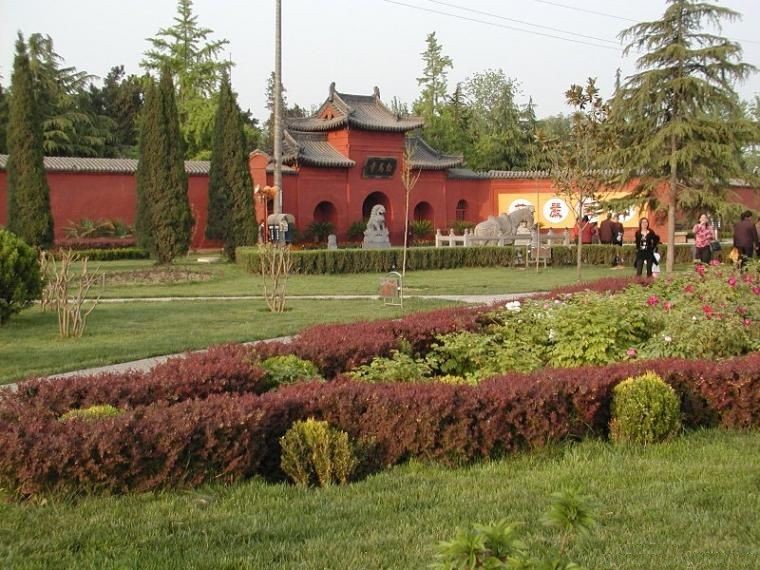 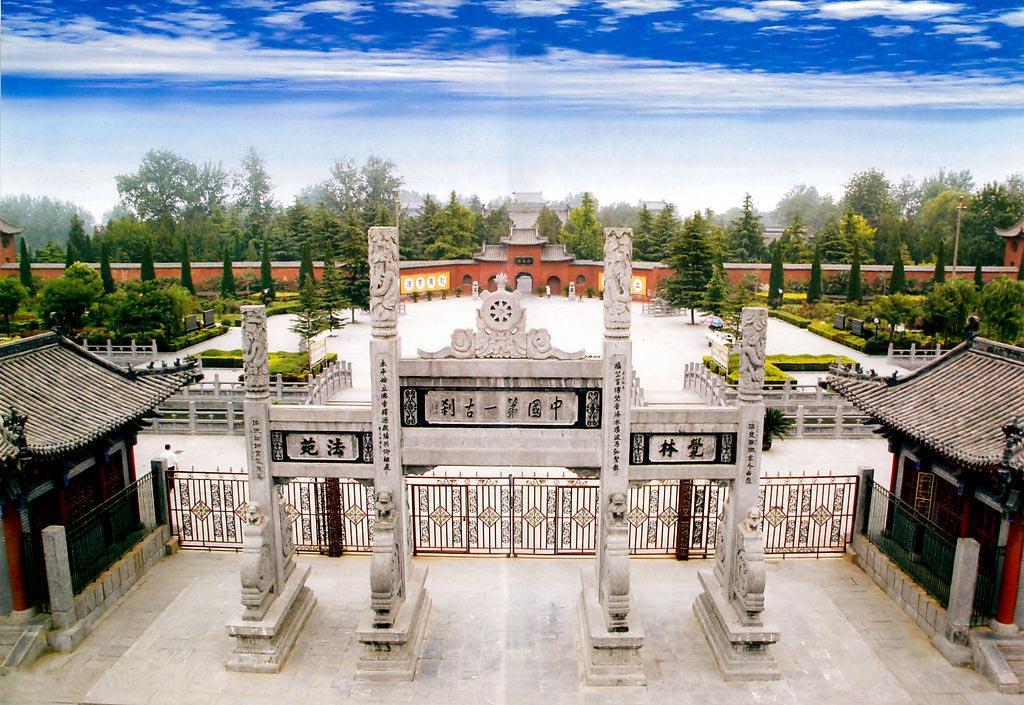 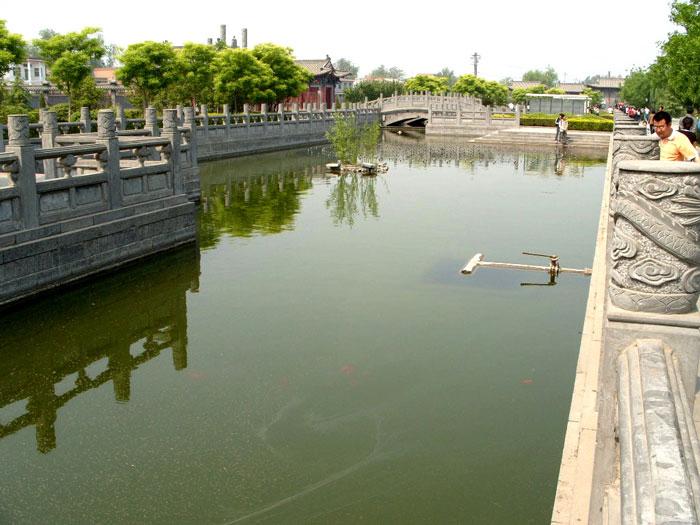 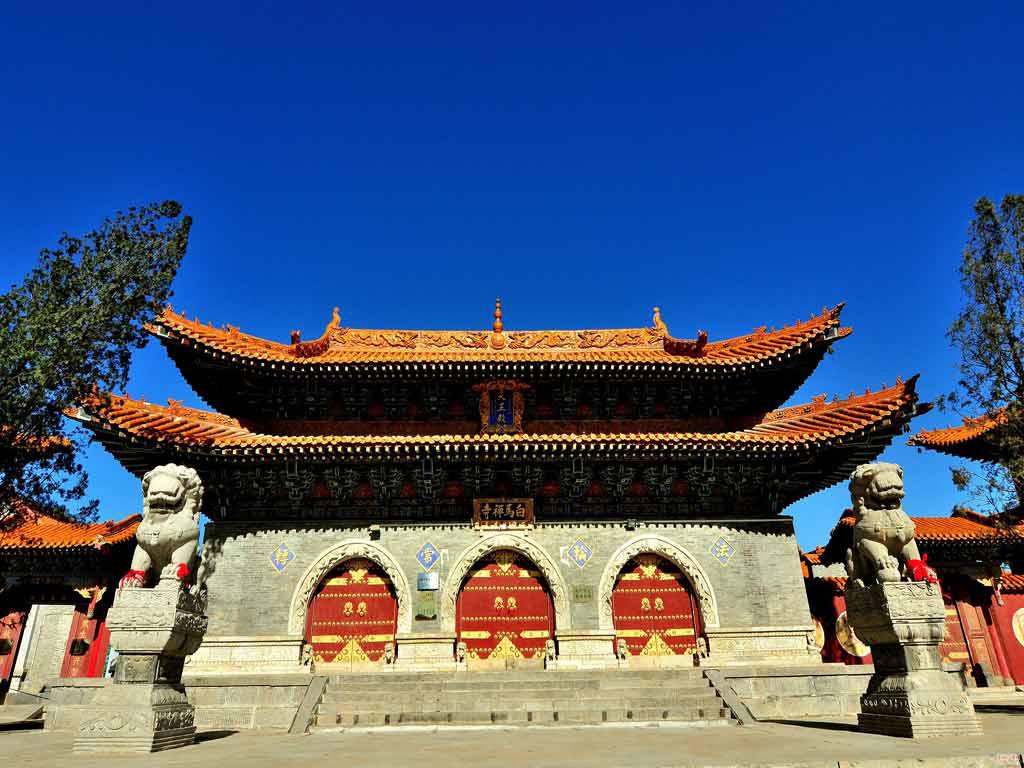 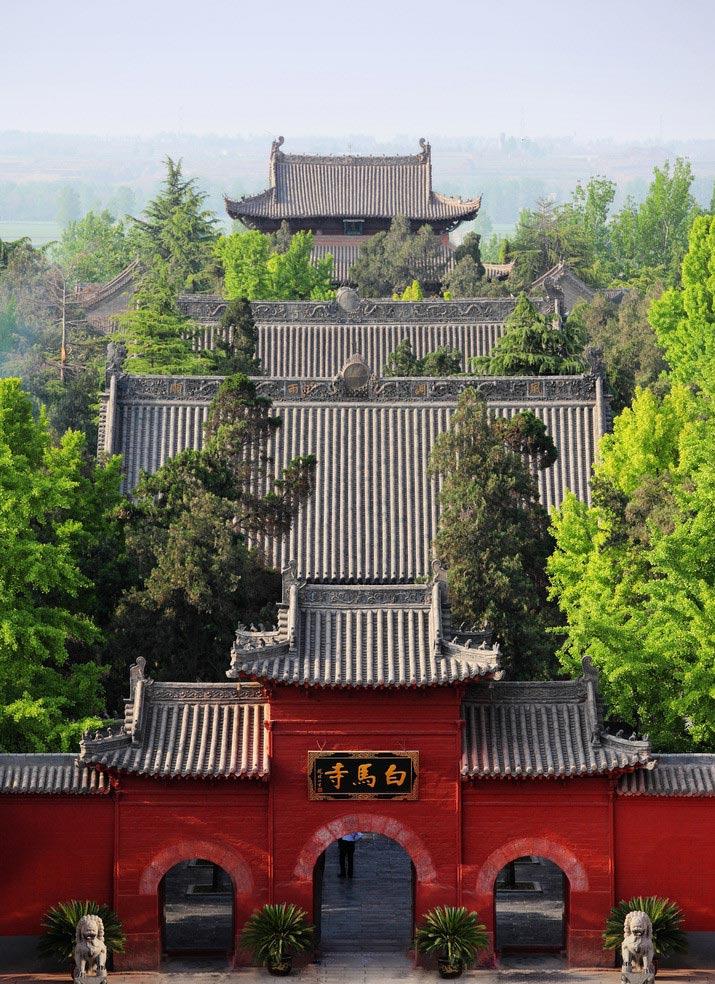 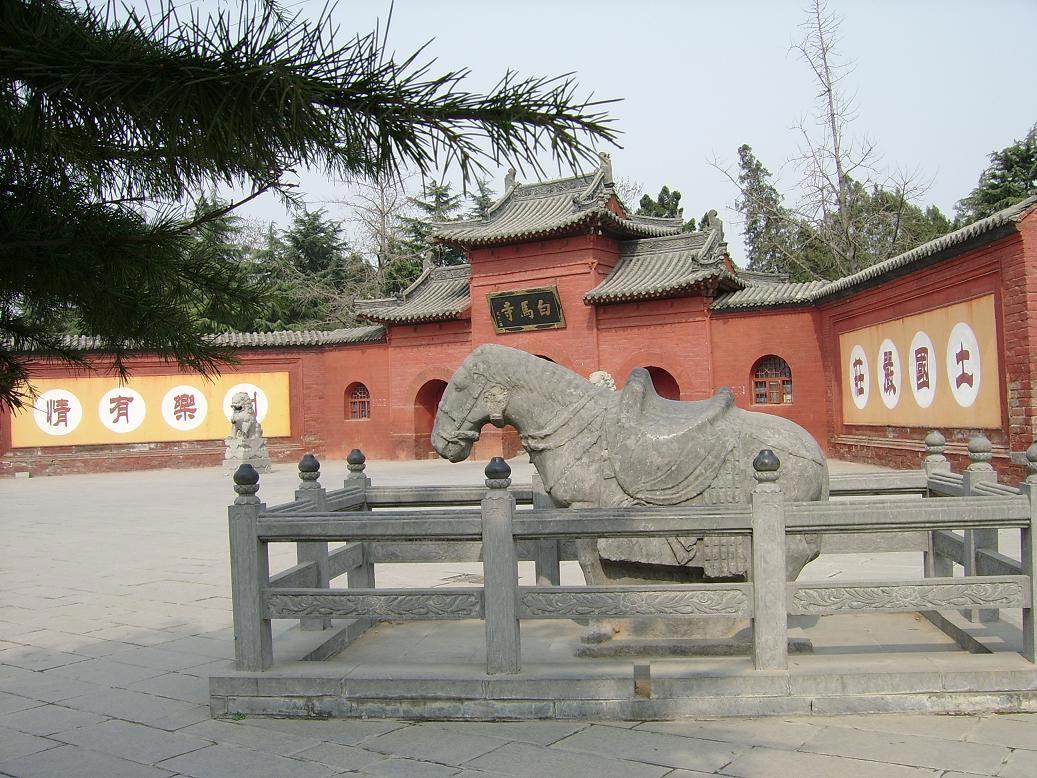 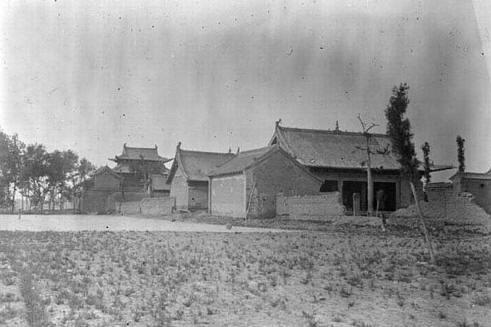 White Horse Temple, or Bai Ma Temple is reputed as the first Buddhist temple in China and considered to be the place where Chinese Buddhism originated. Not only is it magnificent but it is steeped in history.

Legend has it that in the year of 64, Emperor Ming of Han (28-75) dreamed about an immortal that was having a halo flying from afar and landing onto the hall. The next morning, Emperor Ming of Han was so overjoyed at the dream that he told it to his courters and asked them whether they knew who the immortal was. One of his subjects replied that it might be the Buddha. Hence, Emperor Ming of Han sent two of the subjects for Buddhism by way of the Western Regions, Three years later, they returned Luoyang together with two Indian monks Kasyapa Matanga and Dharmaranya who brought myriads of scriptures and statues with them. And Emperor Ming of Han, therefore, had the first Buddhism temple built to install the monks. With respect to the name, it is after the white horse that carried things along the way. 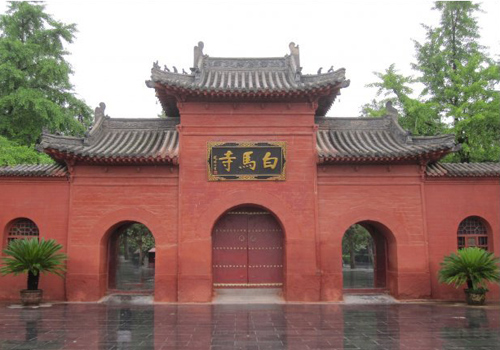 Constructed in Eastern Han Dynasty in 68, the present temple going through its ups and downs is composed of many architecture built in Ming Dynasty (1368-1644) and Qing Dynasty (1644-1912). Covering about 33 acres, the rectangular temple faces south, its main architecture such as Heavenly King Hall, Great Buddha Hall, Hall of Mahavira, Hall of Greetings and so forth all standing on the south - north axis. Other dependent buildings lie on either side of the axis.

In 1961, White Horse Temple was chosen as one of the first batch of the Major Historical and Cultural Site Protected at the National Level by the State Council of the People's Republic of China.

What to see in White Horse Temple?

Shanmen, rebuilt in Ming Dynasty, is a stone archway with three gates. Generally speaking, it means the front door of Buddhist Temple in China, consisting of three gates which are symbolic of "Emptiness Liberation", "Adamantine Liberation” and "Prajna Liberation".

On the red lintel hangs a tablet inscribed "白马寺" (White Horse Temple), which is a relic of Eastern Han Dynasty and the earliest-discovered of White Horse Temple. On each side of the temple stand a pair of stone lions and a pair of stone horses. Being 1.75 metres high and 2.20 metres long, the horses are of huge shape but meek disposition. It is said that they used to be sited in front of the gravestone of Wei Xianxin, the Senior Grand Tutor and Grand Protector of Northern Song Dynasty (960-1127).

Inside Shanmen on each side, one tomb erected respectively in year of 1634 is in sight. The east one is the tomb of "Kasyapa Matanga" and the west one is of "Dharmaranya". They are the eminent Indian monks who translated numerous Buddhist Scriptures into Chinese. 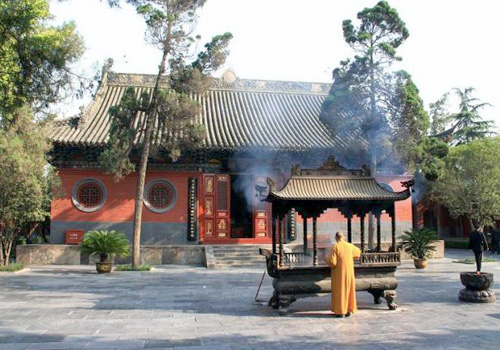 Stepping into the hall, visitors will find Maitreya, informally known as the laughing Buddha, enshrined in the middle. Legend has it that in the Five Dynasties (907-960) he incarnated as a monk begging his way along Zhejiang Province. As always carrying a khakkara and a bag, he is thus called "Budai". Hence people built a statue of Maitreya on the basis of his image. Whenever visitors catch sight of the laughing Buddha, the statue will generate buoyancy in them.

The inside hall is flanked by statues of Four Great Heavenly Kings. They are Duowen Heavenly King holding an umbrella who can hear everything, Zengzhang Heavenly King, patron of growth, armed with a sword, Chiguo Heavenly King, watcher of the lands, carrying a pi-pa, and Guangmu Heavenly King with serpent who can see all around the world. All of them are husky in build and majestic in looking. 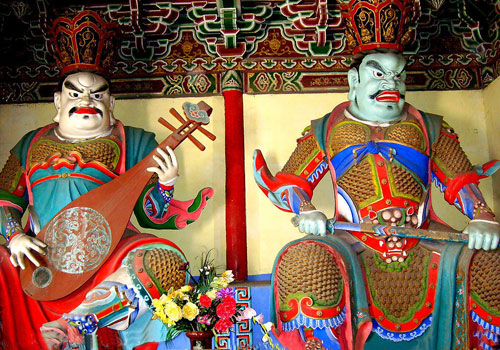 Behind the laughing Buddha is Skanda, known as Wei Tuo Bodhisattva. He is one of the deity subordinates of Zengzhang Heavenly Kings and deemed as the guardian protecting Buddhist rites due to vajra in his hand.

Dating back to Ming Dynasty, Great Buddha Hall is 22.6 metres long and 16.3 metres wide and regarded as a place where major Buddhist rites are held. In the midst of the hall are enshrined three statues, that is, ?ākyamuni , or Gautama Buddha in the middle, and his disciples Mahākā?yapa, one of the most venerated, and ānanda who is known as the Guardian of the Dharma on the left and right. Next to the three statues are Ma?ju?rī holding scriptures and Samantabhadra with Aniruddha in his hand.

Strikingly, a huge bell is in the southeast. Cast in the year of 1555, it is 1.65 metres in height and 1500 kilogrammes in weight. Observing meticulously, visitors will find the bell engraved with interlaced dragon patterns and Chinese characters: "风调雨顺,国泰民安" (May good weather for the crops; May the country be prosperous and the people at peace). Moreover, the toll that can be heard even ten miles away has become one of the eight attractions of Luoyang City. Nowadays, when it comes to the first day of New Year, the traditional bell-striking takes place here.

Behind the Great Buddha Hall stands the Hall of Mahavira, which has a overhanging gable roof. As it is 22.8 metres in length and 14.2 metres in width, this hall is the largest among all. In the centre are three awe-inspiring Buddhas. The middle one is ?ākyamuni, or Gautama Buddha that is thought of as the Supreme Buddha, on whose left is Amitābha possessing surpassing merits, while on whose right is Bhaisajyaguru, customarily known as the "Medicine Buddha". All of them face south. Two Heavenly Generals Wei Tuo and Wei Li are on their feet in front to protect three Buddhas. Eighteen Arhats, however, are installed evenly on the both side. 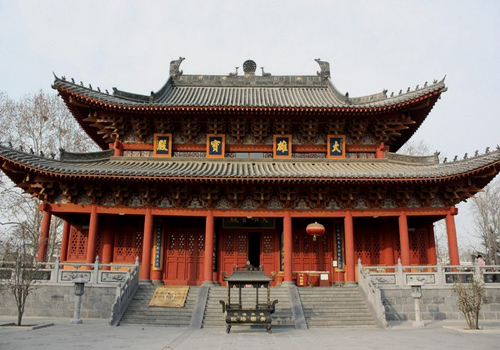 All statues in the hall are best-preserving and made in Yuan Dynasty (1271-1368) by adopting the dry lacquer technique, so they are hollow and can be lifted with one hand. In terms of China, such exquisite statues are unparalleled that appreciating them at one time is absolutely a feast for the eyes.

Sauntering along the Hall of Mahavira gives on to the Hall of Greetings, which are rebuilt in Qing Dynasty. The hall is seldom seen in common temples. Being 14 metres in length and 10.7 metres in depth, Hall of Greetings is the smallest with double base. Enshrined in the hall are Trinity of Western Paradise, that is, Amitābha in the middle, and on the left and right, Arya Avalokiteshvara with kalasa in the hand and Bodhisattva of Great Power grasping cinta mani.

As a garden architecture Cool and Clear Terrace is a special attraction in the temple. Overlooking it, visitors can find it displaying many distinctive characteristics of ancient oriental architecture, 42.8 metres long, 32.4 metres wide, 6 metres high and black brick-made terrace. It is said that it used to be a summer resort and place where Emperor Ming of Han (28-75) studied during his boyhood, and later, it was for two eminent Indian monks – Dharmaraksha and Kasyapa Matanga - to translate scriptures. 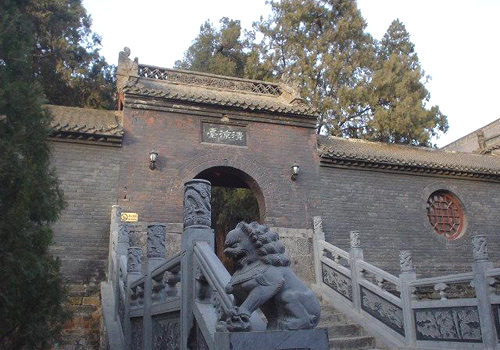 Situated in the Cool and Clear Terrace, Pilu Pavilion was originally built in Tang Dynasty (618 - 907) and renovated in successive dynasties from Yuan Dynasty to Qing Dynasty. Being 15.8 metres long and 10.6 metres wide, it has a gable and hip roof with single eave. In the heart of the pavilion there is a niche where the statue of Vairocana is housed. On the left is Ma?ju?rī and right Samantabhadra. In Buddhism, all three are named "Huayen Trinity".

Outside the Pilu Pavilion are flanked by two side halls. One is of Dharmaraksha and the other is of Kasyapa Matanga. Their mud statues are also put up in honour of their contribution to Chinese Buddhism.

Located before the eastern Pilu Pavilion, Duan Wen Tablet is 3.05 metres in height and 1.03 metres in width. It is recorded the history of the temple and of high value. Generally, "Duan" in Chinese means "Broken", "Wen" "Text", but it does amount to a broken table. What it refers to is an unconventional and unique style of writing. Texts are commonly carved from top to bottom; however, texts of Duan Wen Tablet are divided into several sections each of which comprises 20 lines. 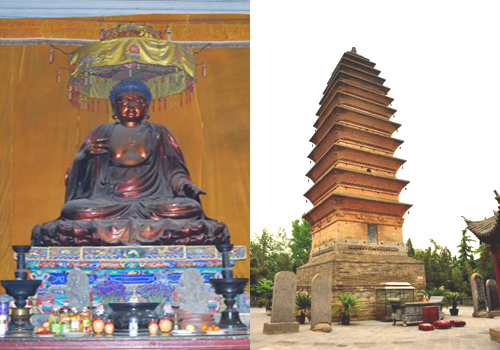 250 metres away from the east of the temple, there is a dependent architecture - Qiyun Pagoda, also called ?ākyamuni Dagoba. The prime pagoda was made of woods, but it was demolished by the end of the Northern Song Dynasty (960-1127). Consequently, what visitors see today was a brick tower built in 1175 by Jin Dynasty (1115-1234). As the earliest ancient architecture of Luoyang City, it has a long history of more than 800 years. There are 13 storeys and it is about 25 metres high. Delightful scenery is overlooked from the doors facing south on each storey. The quaint and towering architecture will never fail to amaze visitors.

Tours including The Baima Temple