Lhasa is the capital city of Tibet Autonomous Region, Northwest China. Literally meaning "the place of the Gods" in Tibetan, Lhasa is the religious and political heart of the Tibetan world, a place where travelers to Tibet usually stop. Lhasa is known as one of the highest cities in the world, standing at an altitude of 3490 metres (11,450 ft) and surrounded by the Himalayan Mountain ranges. The city enjoys a cool and semi-arid climate with frosty winters and mild summers due to its own topography and mountainous landscape. Lying in the Tibetan Plateau, the city is also home to a major Tibetan people nationality but also Han and Hui peoples and several other ethnic groups. Travelers who want to live the adventure of entering Tibet will for sure go mainly to this capital city where admiring Tibetan Buddhist sites such as the Potala Palace, Jokhang Temple, Norbulingka Palace and many other temples and monasteries. The increase of tourism in the region has been a great chance to develop the city centre where a modern city of karaoke, bars and hotels have swallowed the old one. Embodying the spirituality of Buddha and the Dalai Lama as well as the principal tip of the "rooftop of the world", Lhasa is the destination of a pilgrimage for your soul and your heart. 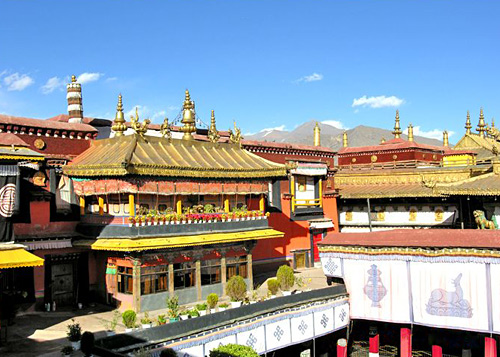 Lhasa has a long history registered for centuries in many Tibetan ancient writings. Called "Rasa", literally meaning "goat's place" in ancient times, Lhasa has been the capital city of Tibet since the establishment of the Tibetan Empire by King Songts?n Gampo in the mid 7th century. Starting from this date, many religious and spiritual buildings started to be built by the Empire, such as the Potala Palace on Mount Marpori in 637, Jokhang Temple in 641. Lhasa was already considered as the religious and political centre of the region. But the 9th century saw the arrival of several dark times as for the good care of the ancient and sacred buildings. With the fall of the monarchy, Lhasa's sacred sites were destroyed and desecrated. In the mean time, the ascension of the 5th Dalai Lama marked a big turn in the ruling of the whole Tibet region. Indeed, this is since this time that Lhasa is considered as the political and religious capital of Tibet. The already largely spread Buddhism in the region was a real way of life guiding everyone's path. With year and centuries, the importance of the city increased with the building and rebuilding of sacred monasteries and temples: the Potala Palace on the Red Hill was finally rebuilt in 1645. Becoming more and more famous at an international scale, Lhasa saw the arrival of the first western travelers in the 20th century. With a nearly half population of monks, Lhasa was already a real cradle of Tibetan Buddhism. Essentially turned to religion and agriculture, the city and whole region started to open to tourism in the 1980s for earning more benefits and get development. Later on, the construction of the Qinghai-Tibet Railway and the connection with other Chinese provinces of Sichuan, Yunnan and Xinjiang was a great turn for Lhasa and the whole Tibet Autonomous Region. 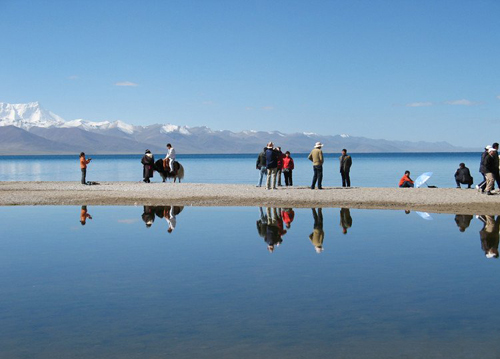 Still based on agriculture and husbandry, the economy of Lhasa has developed a lot with the arrival of the first travelers in the 1980s. For traveling to this special region of China, travelers who look for a sacred pilgrimage to Lhasa or Tibet in general should know that a travel permit, e.g. TTB Permit (Tibet Entry Permit (Tibet visa)), PSB Permit (Alien's Travel Permit), F visa travelers special documents, etc…, is required to everyone. Lhasa is the starting and terminus stop of five main road routes to and from Tibet, among which two are officially allowed to be used by foreigners: the Nepal (920 km) and Qinghai routes (1754 km), the other ones from Sichuan, Yunnan and Xinjiang Provinces being too dangerous and lacking of public transportation. Travelers to Lhasa enjoy the beautiful and awe-inspiring historical and religious interests of this capital city. The Potala Palace, Jokhang Temple and the Norbulingka all ranked as UNESCO World Heritage Sites, and the Nam-Tso Lake are the most must-see scenic spots on your tour even if Lhasa is just a marvel at every single corner. Meeting the friendly Tibetan people is also a great experience as well as to taste of the rich Tibetan and Chinese cuisine. Conveniently deserved by the Lhasa Gonggar Airport, going to Lhasa is also generally done by Land Cruiser. Travelers would be in admiration in front of the scenery displayed by this azure-sky Plateau: make a wish, Lhasa opens its door to your soul.

Foreign guests and travelers going the marvelous region of Tibet are more than welcome to visit the numerous temples and monasteries. Nevertheless, we recommend visitors to observe some courtesy behaviors in order to respect the life of monks and the overall spiritual mood.

- Please try not to touch or remove anything, take prayer flags or stones.

- Do not take photos during prayer meeting and/or ask for permission to take a photo especially if you are using a flash. Some fees can be inferred to you in larger monasteries.

- As for body language and privacy, make sure not to wear shorts or short skirts, and take off your hat.

- Of course, do not smoke in temples and monasteries.