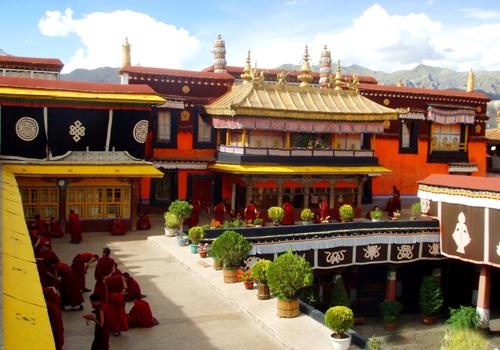 The best way to Lhasa is by train, which climbs mountains bit by bit and is helpful to adapting altitude environment. Currently, there are trains to Lhasa from Beijing, Chengdu, Chongqing, Lanzhou, Xining, Shanghai and Guangzhou.

There are public buses No.86, 89 and 91 at the east of railway station square respectively to Lhasa Northern Suburb Bus Station, Lhasa Public Transportation Company and Lhasa Western Suburb Bus Station. A taxi from Lhasa Railway Station to urban area costs around CNY20.

Lhasa serves as a transfer stop to other places of Tibet. Lhasa Long-distance Bus Station is located in the junction of Minzu Lu and Jinzhu Zhonglu, Lhasa North Suburb Bus Station No.11 Zhaji Lu, and Lhasa Eastern Suburb N0.3 Jiangsu Donglu. Currently there are five highways leading to Lhasa.

Qinghai-Tibet Highway (Xining-Golmud-Lhasa) has good condition and offers views of Qinghai Lake, Kunlun Mountains, Tanggula Mountain Pass, North Tibet Grassland and Yambajan. However, tourists have to take a train to Xining, the capital city of Qinghai Province, and then transfer to Golmud by train. There are daily buses from Golmud to Lhasa which take 30 hours with price differencing from CNY150 to CNY210.

Sichuan-Tibet Hilway (Chengdu-Lhasa, G318) goes through great difference of latitude and experience four seasons within one day. Moreover, it winds though mountains and may cave in during rainy season. Alongside tourist attractions include Erlang Mountain, Luding bridge, Kangting, Jinsha River, Ranwu Lake, Tongmai and Nyingchi County.

Nepal-China Highway（Katmandu-Shigatse-Lhasa. One has to enter China via Zhangmu Town, which is 776 km from Lhasa and on the border with Nepal. There are regular buses to Lhasa and run about 15 hours at the price of around CNY220.

There are ten more public transportation lines in Lhasa city proper. Line 106 and 109 can bring you to Norbulingka Summer Palace. In addition, some private middle buses have regular routes and will stop when you ask.

A taxi usually costs less than CNY10 within the city proper.

Many hotels provide bicycle rental service with the rent of CNY3 one hour and CNY20-30 a day.