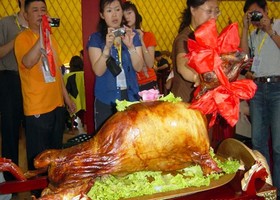 The most common food of Tibet is Cold Yak Meat, Fried Lamb Chop, Barley noodles, Barley wine, Yoghourt, Tibetan-style steamed bun. Tibet dish gives priority to meat and is cooked simple. If the food is not to the taste of some people, fortunately enough, Sichuan Cuisine is available  to provide with some salvation. Besides, Nepal dishes, Indian foods, western foods and even bars can be found in this city.

Roasted Barley flour (糌粑) and Buttered Tea (酥油茶)The two are usually served together. Roasted barley flour is the staple food of Tibetan. And buttered tea is a typical Tibetan drink made from butter and strong tea, which are stirred and mixed into cream.

Barley Wine (青稞酒)Wine just goes together with food. Barley Wine, called Qiang in Tibetan language, is made from Barley, the staple food of Tibet. It can be strong or mild. Barley wine is the favorite of Tibetan. It is served when it comes to festivals, wedding, having a baby, entertain guests.

Air-dried beef (风干牛肉)Air-dried beef is also the favorite of Tibetan. It is usually made in autumn. Fresh beef is sliced and clustered in a string, then is mixed with table salt, chili pepper and ginger powders, and eventually hanging somewhere for air-drying. Thanks to the high-plateau climate, foods can hardly go bad; therefore, air-dried beef is still popular today.

Barley Noodles(青稞面)Barley Noodles is served on the table as a typical breakfast of Tibetan. It is boiled in yak meat broth and served together with spoons of chili sauce, meat pie, and followed by a cup of sweet tea. Fantastic!

---Deji Road (德吉路)This street offers many varieties. In addition to typical Tibetan food, nearly all flavors of Chinese food can be found there at relatively low price.

---Beijing Road (北京路)A number of western restaurants are clustered in this street.