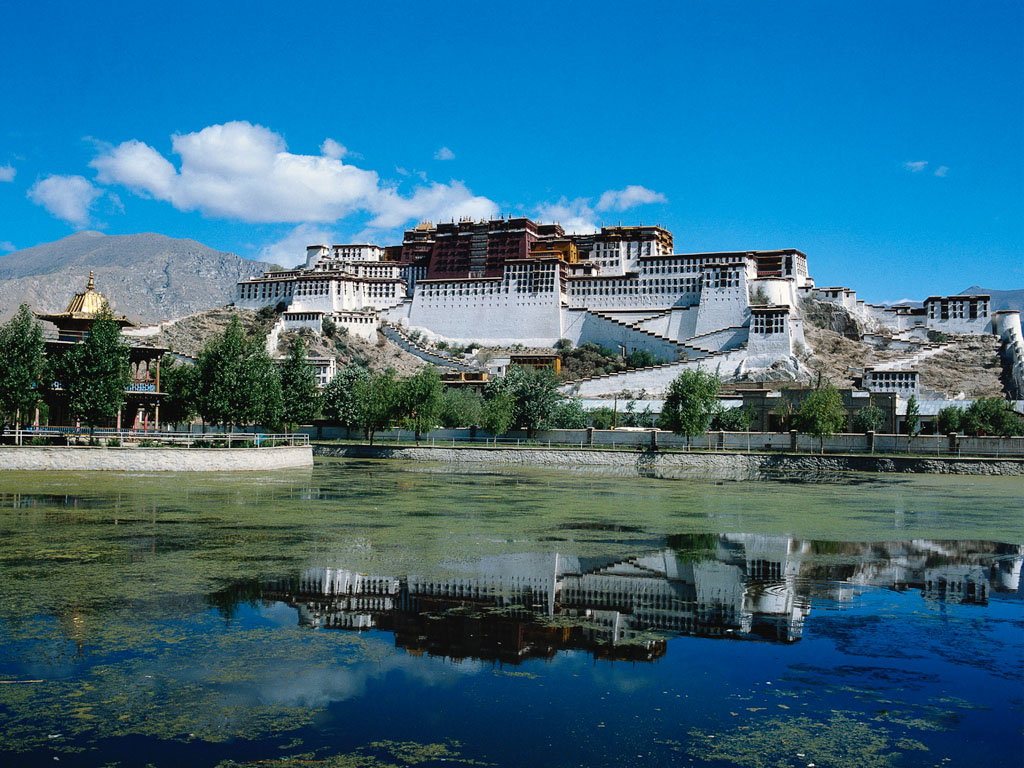 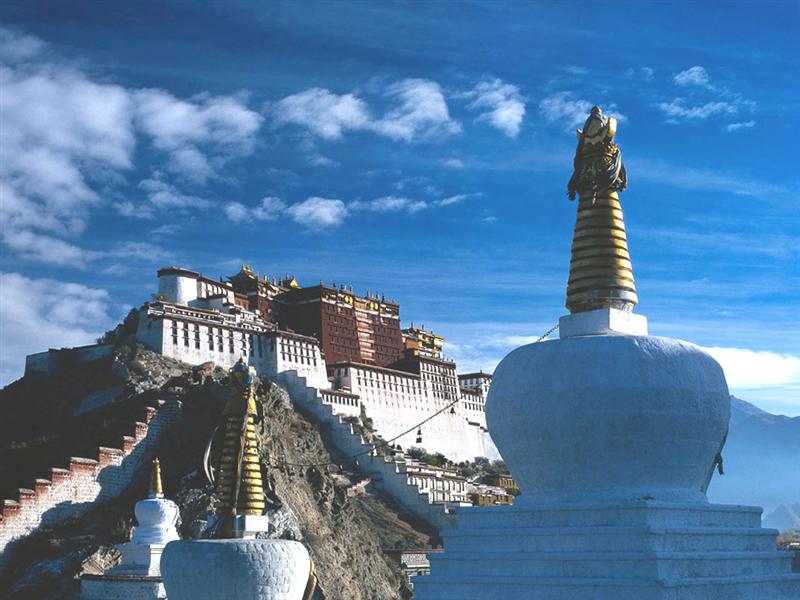 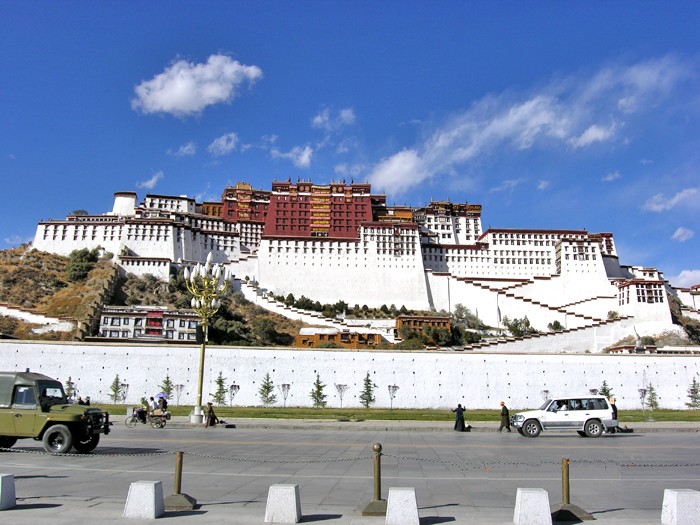 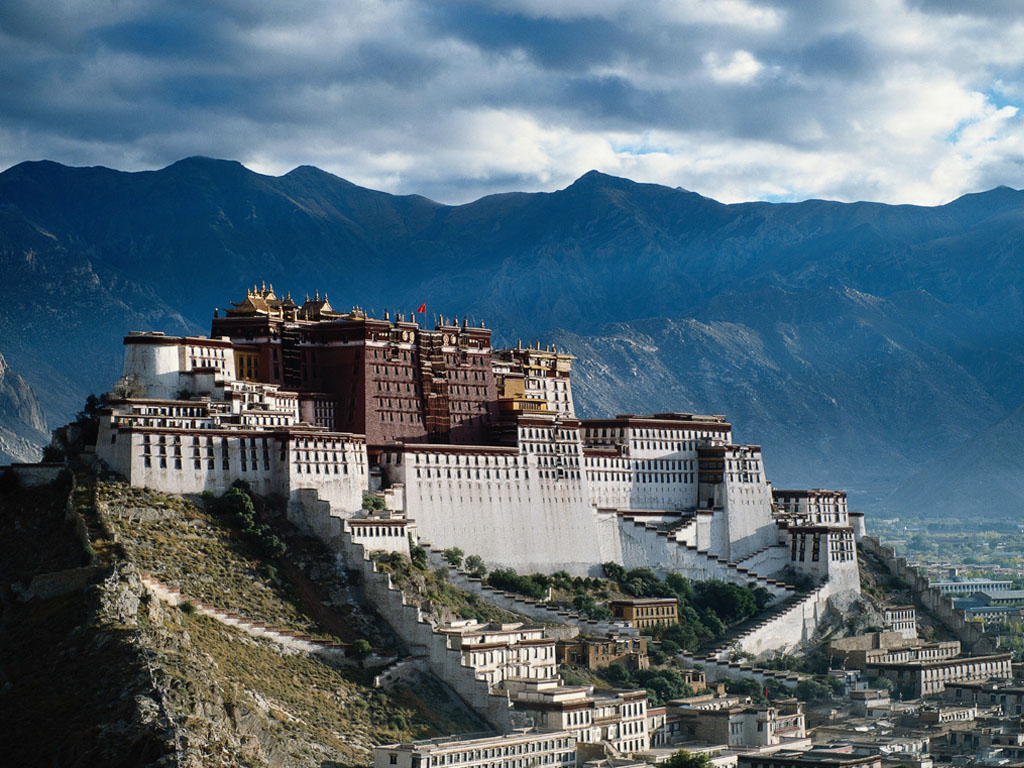 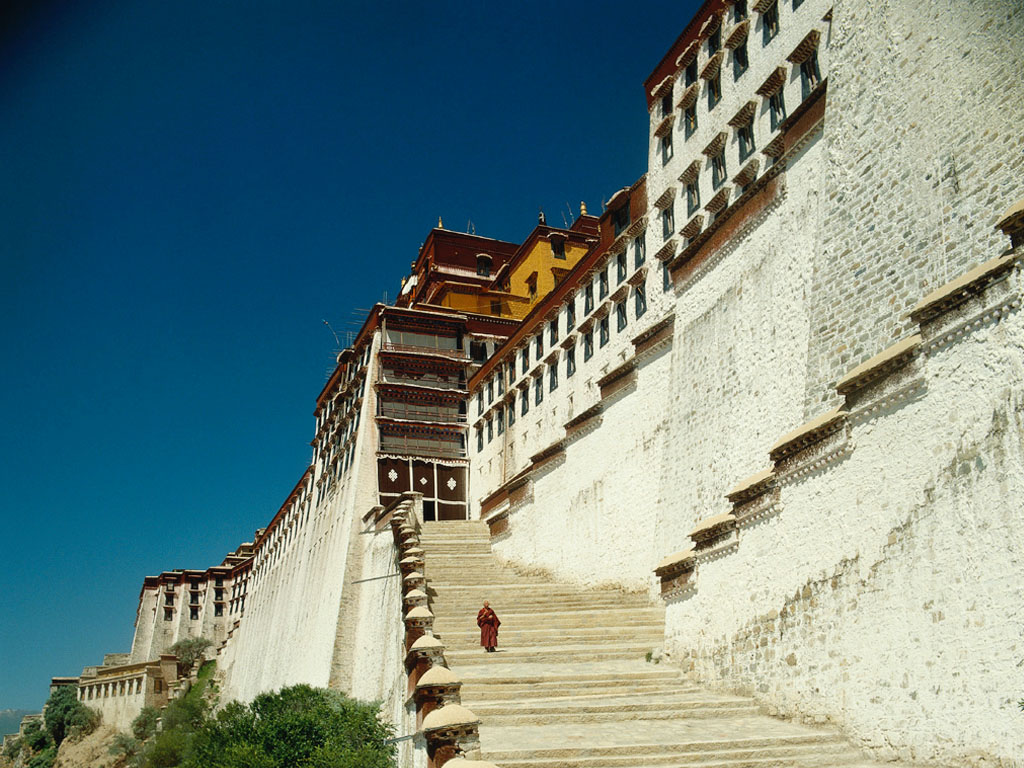 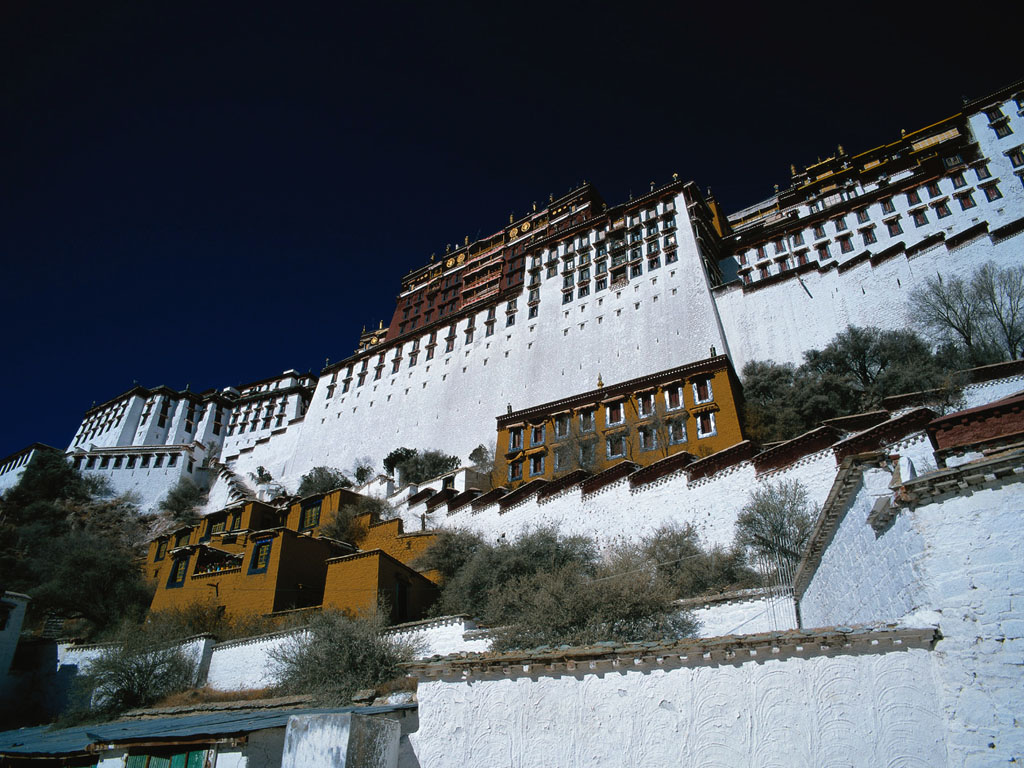 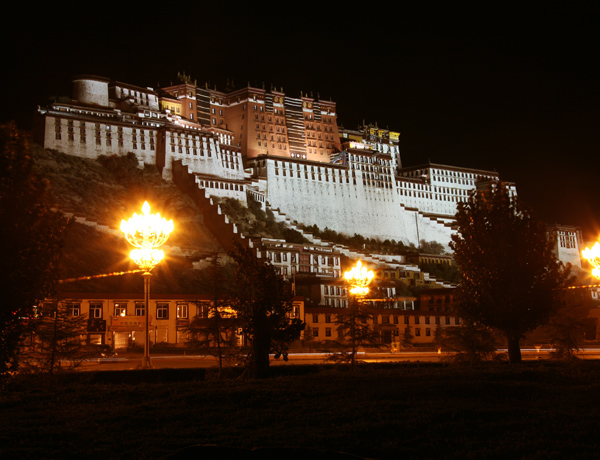 Chinese name: 布达拉宫 (Budala Gong)
Location: No.35, Gongqian Alley, Middle Beijing Road, Chengguan District, Lhasa City, Tibetan Autonomous Region.
Entrance fee: 200 Yuan from May to October and 100 Yuan from November to April. (In consideration of the old wooden structure of Potala, at present only 2300 tickets are issued daily, 1600 for Chinese travel agents and 700 for Chinese independent travelers).
Opening time: 09:00-16:00
How to get there: The way for foreign travelers to enter Tibet is booking a Tibet tour or a China tour containing Tibet with a Chinese travel agent in advance.

Potala Palace Travel Tips:
1. Due to the high altitude (above 3750 meters), it is suggested for physically weak visitors to start the visit from the top of the palace. It is available to get to the top by taxi.
2. There is strict security check before entering the palace, so do not take along any hazardous articles or cutters such as a nail clipper
3. The Potala Palace is relevant to Buddhism, so there are some taboos visitors should notice. For example, visitors are not allowed to wear a hat, tread the doorsills or take photos in the palace.
4. Visitors have to finish the tour within one hour, so it is not allowed to stay at any corner of the palace for a long time.
5. It is cold in many halls of Potala Palace, so it is suggested to take along a coat.
6. Look out of the steps while visiting. Flat-bottomed shoes would be a wise choose.
7. The best site for shooting the Potala Palace is the Mount Yanwang (药王山 yao wang shan) located southwest of the palace, on which there are 2 white signal beacons. It costs 1 or 2 Yuan to take photos on this mount.

About 2 kilometers away from the center of Lhasa, the Potala Palace sitting on the Mount Hong (红山) which is believed by the local to be the sacred mountain where Avalokitesvara lives, is an imposing architectural complex originally built in the 7th century before Sontzen Gampo married Princess Bhrikuti of Licchavi Kingdom of Nepal and Princess Wencheng of Tang Dynasty. 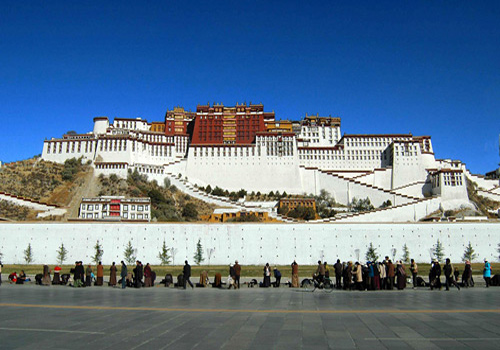 The whole Potala Palace occupies an area of more than 130,000 square meters. Visitors need to climb 5 slopes if they want to enter the White Palace and the Red Palace of Potala. There are over 1000 rooms in the palace, but only more than 20 of which are opened to tourists at present. Being a palace with political and religionary functions in history, Potala is exquisitely decorated with gorgeous paintings and embossment themed on plateau landscapes, historical legends, Buddhist stories, the scene of building Potala, etc. 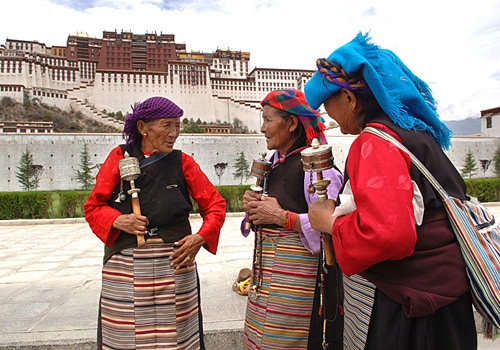 The porches and halls of Potala Palace twist and scatter from the foot to the top of Mount Hong and there seem to be 13 floors from the outside, but there are nine in fact – the four floors at the bottom are structures supporting the main body of the palace. It is marvelous that the palace was wood-and-stone structured in the mass, with the outer walls built with huge granites and some consolidated with iron.

Being of typical Tibetan architectural style with white, red and yellow walls, the Potala reaching up to 110 meters was once the palace of Tibetan rulers but was destroyed in wars twice. In 1645, a reconstruction ordered by the fifth Dalai Lama started. It took about half a century to finish the project and the palace became the winter palace of Dalai Lamas since then. 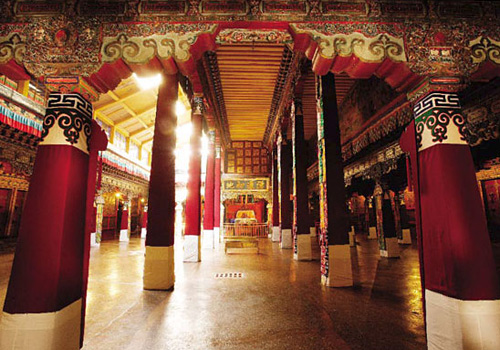 Apart from being a famous imperial palace of Tibetan kings and a sacred land of Buddhism in Chinese history, the Potala Palace is also known as a treasure house of arts that collects a large number of cultural relics of it, including ten thousand pieces of Thangka (Buddhist scroll paintings), statues of Buddhas made from gold, silver, jade, wood and clay, bullaes, sutras, Sharipu of Sakyamuni, etc.

In 1961 it was announced to be a site under national protection by State Council of the People's Republic of China and was put on the list of World Cultural Heritage in 1994.

The main body of the Potala Palace is made up of the connecting White Palace and Red Palace. 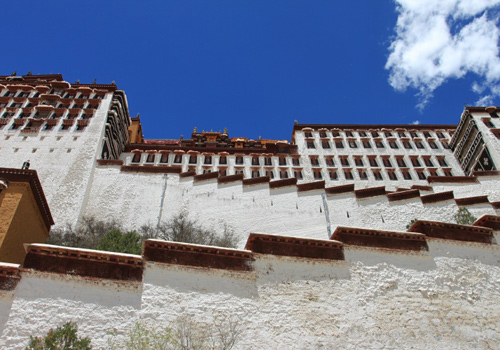 The White Palace of Potala is a majestic 7-storey palace with various halls and galleries, the inside of which is painted with colorful resplendent Buddhist murals by masters. The white outside walls of White Palace suggests source of its name and the symbol of mercy of Buddhism. The kalsomine on the walls is mainly made from lime and milk, which are consecrated by a great number of pious Buddhism believers every year.

The zig-zag porch outside the White Palace is the access to the entrance; the square named Deyangxia on the eastern mountainside was Dalai Lamas' exclusive theater and the site for outdoor Buddhist activity. On both sides of the square there is the bonze official training school. 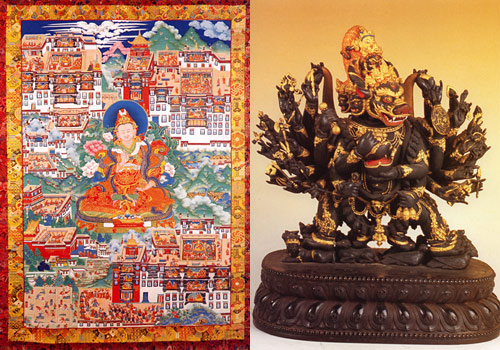 Cuoqinsha on the fourth floor is the largest hall of the White Palace. In the hall a throne for Dalai Mala is set up under a plaque inscribed by Emperor Tongzhi of Qing Dynasty (1644-1911). It was on this floor that important Buddhist ceremonies such as the enthronement of Dalai Lama took place.

The fifth and sixth floors are living and work areas; and Dalai Lamas enjoyed the privilege of living in the Sunlight Hall on the garret floor of the palace, the name of which comes from the sunshine shooting from some part of the roof. The Sunlight Hall comprises two parts: the western hall first built and the eastern one modeling the western afterward, which were the place where the thirteenth and fourteenth Dalai Lamas lived and worked respectively and only senior monk and layman officials were allowed to enter. 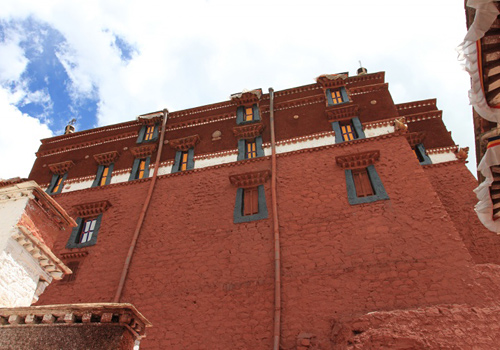 Covering an overall floorage of some 16,000 square meters, the Red Palace of Potala contains some marvelous structures such as the Dalai Lamas' stupas, Buddhist hall, chanting sutra hall, with seven actual floors and six supporting foundation floors. Distinguishing from the kalsomine of the White Palace, that of the Red Palace is extracted from a local plant, signifying wisdom and strength. The Red Palace was once the supreme religionary ruling center of Tibet, in which important Buddhist ceremonies were held.

Floors from the first to the seventh of the Red Palace were used as storeroom, the seventh to the ninth as Buddha halls and sutra halls, and the tenth to the thirteenth are set up with windows and inner skylights. Around the skylights are the stupas of the Dalai Lamas and some halls. 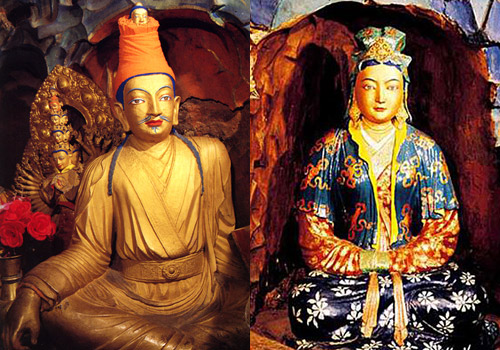 Being the core of Potala, Red Palace is famous as a house of great treasure of Buddhism and arts. On size, the West Hall on the fifth floor holding over 1250 square meters is largest and the enthronement of a Dalai Lama was held here. On value, the 14-meter-high stupa of the fifth Dalai Lam built with 3700 kilograms of gold and about 15,000 diamonds is a great treasure without any doubt. On age, the Dhammassami Hall and the Saint Avalokitesvara Hall win for being said to be the only two existing structures constructed during the reign of Sontzen Gampo. Today, the statues of Sontzen Gampo and his wives Princess Chizun and Princess Wencheng are enshrined and worshiped in the Dhammassami Hall and in the other there is a huge statue of Avalokitesvara carved from a piece of entire sandalwood.

Tours including The Potala Palace