Known as the "Spring City", Jinan is the capital of Shandong Province, and a national famous historical and cultural city. Located in the middle of Shandong with Mountain Taishan on the south and the Yellow River (Huanghe River) in the north, it enjoys the fame of  "the best springs under the sun". It is an important cradle of Chinese civilization and the birthplace of Longshan Culture, which is a world famous prehistoric culture. 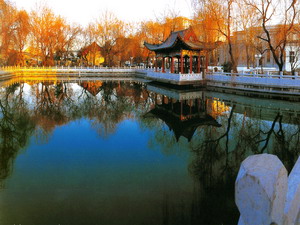 with a daily flowing capacity of 100 cubic meters in normal years. In the area of springs gathering, it appears a beautiful and unique picture of  "spring following by every house and willow trees standing beside every door" and "lotuses on four sides, and willows on three ; mountains outside and a lake within", and forms a special cityscape consisting mountain, spring, lake, river and city. Spring is the essence and soul of Jinan, Jinan spring has a long history. As early as 2600 years ago, Spring and Autumn. The 18th Year of Huangong recorded that "Huangong (Duke Huan) met Qihou (Marquis of Qi) at Luo". Here the "Luo" refers to the Baotu Spring. The seventy-two famous springs in this city have been known since 700 years ago; there were records of them in Jin, Ming and Qing Dynasties. According to research made in recent years, Jinan has more than 645 springs. In terms of the city development, historical evolution and folk customs, the spring plays a direct and important role in Jinan. 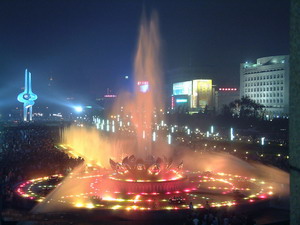