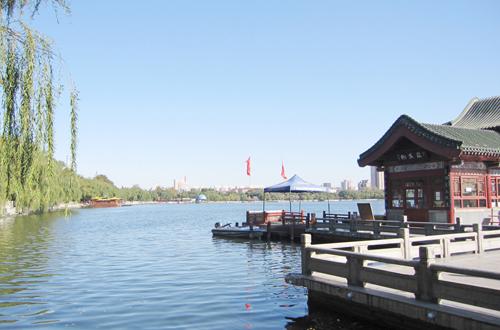 From the airport to downtown area:
- take public bus No.309, 10 or 97;
- shuttle buses from the airport to the downtown Jinan open for 24 hours a day, and the departing time is depending on the flights arrival time; The ticket price charges about CNY20; the buses run in the day time before 18:00 get to the Long-distance Coach Station, and the ones after 18:00 in the evening get to Shunhe Street.

Jinan Station is the largest in Shandong Province, and also the most used one by passengers. It is about 490 kilometers apart from Beijing, 968 kilometers from Shanghai and 393 kilometers from Qingdao. In the city, travelers can take public bus No.3, 21 or 83 to get to the station.

As a supplementary station to Jinan Station, the East Jinan Station opens a train to Luoyang and receives trains running between Qingdao and Dandong, Qingdao and Taiyuan, and Beijing and Weihai. Public buses No.14, 30, 37, 83, or 112 can take travelers to the station.

Taxies- in general, the taxi price starts at CNY8 for 3 kilometers, and CNY1.5 for extra 1 kilometer; some high-ranking taxies may pricing higher, starting from CNY10.

Public buses- Jinan has a quite developed public transportation system with two series public buses, the common series and K-series. The common one charges CNY1 and K buses charge from CNY2. Major buses run along tourist attractions are No. Tourist 66, K51, K68, 88, 3, 65 and 5.

Subways- 6 lines are in the planning.