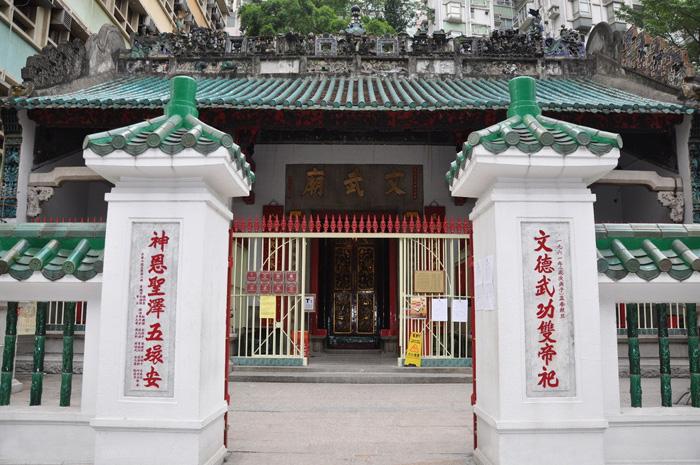 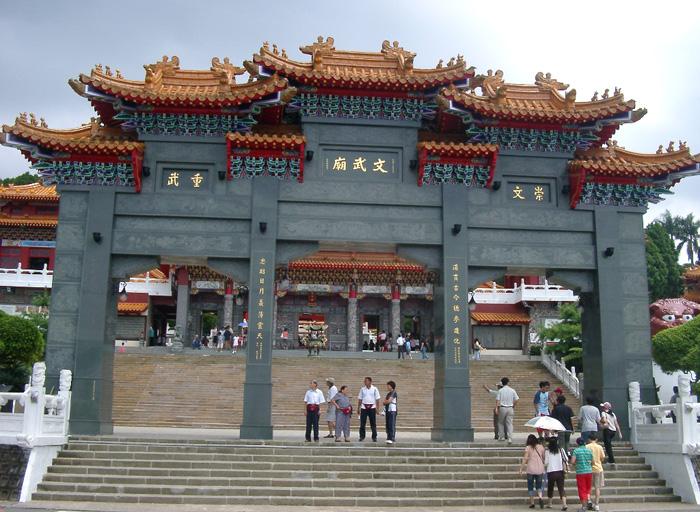 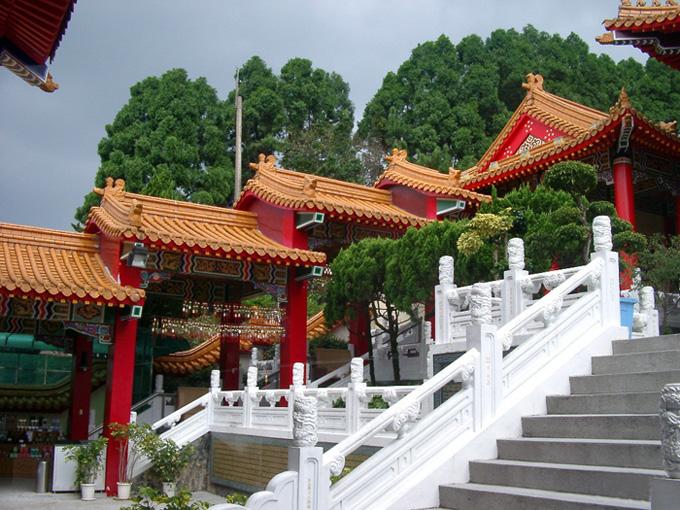 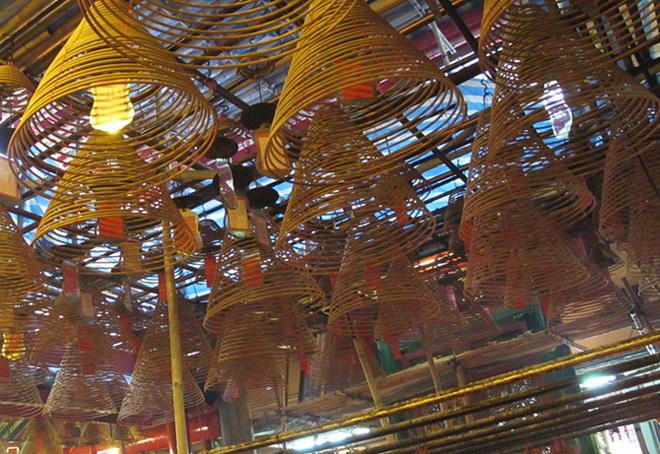 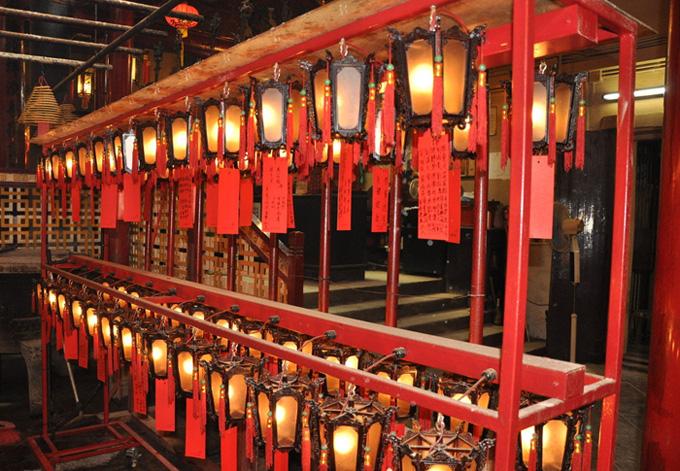 
Chinese name: 文武廟
Location: At the intersection of Hollywood Road, Sheung Wan, Hong Kong.
Opening time: 08:00-18:00.
Entrance fee: free.
How to get there: Take the bus No.26 at the square of the Landmark in Hong Kong Central District and debus at the second station in the Hollywood Road.


A Man Mo Temple is built for worshipping the God of Literature and God of Martial Art. The two gods refer to Man Tai (Man Cheong, 文昌) and Mo Tai (Kwan Tai, 關帝). The former is a Taoist immortal, who is believed to take charge in fame and wealth of human being. Kwan Tai is a well-known general in Three Kingdom Period (220-265), who is famous for loyalty and valiance in history and was entitled as God of martial arts by many emperors. Besides, Kwan Tai is highly worshipped by Buddhists. Man Mo Temples can be seen in many regions including but not limited in Hong Kong. The worshipping to Man Chong and Kwan Tai reveals the root of Chinese culture in Hong Kong. There are three important Man Mo Temples in Hong Kong, respectively on Hollywood Road of Sheung Wan, on Fu Shin Street of Tai Po District in New Territories and in Mui Wo of Lantau Island. The most popular one is located in the Hollywood Road. 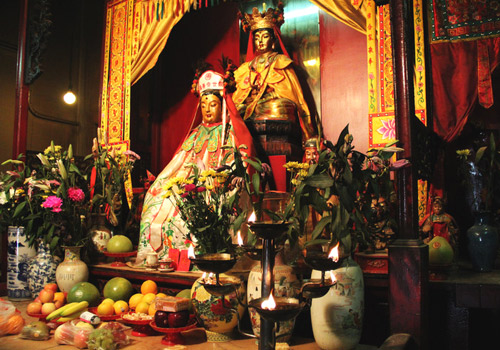 Located on the famous "Antique Road" (Hollywood Road), where collections of antiques can be found, Man Mo Temple is known as one of the oldest temples in Hong Kong and was listed as a legal relic in 2010. It is said to have been existed in 1842. The oldest relics are the granite column donated in 1850 and the bronze clock casted in 1847. The rite of "Zhan Ji Tou" (see below) stemmed from Qing Dynasty (1644-1911) is still very popular in Man No Temple. The temple rises to fame for the God of Literature and the God of Martial Art are enshrined in it. Therefore, many students and merchants come here to pray for achievement in study and cause. Nowadays, it has become a must-see tourist spot.


History and details of Man Mo Temple in Hollywood Road


In 1908, the Hong Kong government formulated the rules on Man Mo Temple and officially entrusted Tung Wah Hospital to take over the temple. Up to now, The Ting Wah Hospital Group and social leaders host annual Autumn Sacrificial Rites to offer sacrifice to the two gods. Man Mo Temple is of great historic and social significance to Hong Kong and reflects the social and religious practice of Hong Kong. 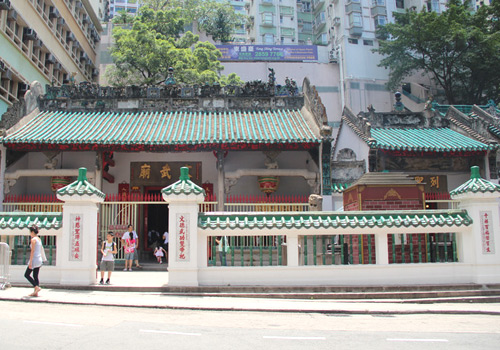 It is a temple complex consisting of "Man Mo Temple" (the main building of Man Mo Temple), the "Lit Shing Kung" and the "Kung Sor". God of Literature (grasping a writing brush) and God of Martial Arts (dressed in green robe and toeing a sword) are enshrined in the Man Mo Temple; all heavenly gods are enshrined in the Lit Shing Kung. The Kung Sor is the place for settling disputes and discussing affairs. The three blocks are separated by two narrow lanes.


The Man Mo Temple follows the traditional Chinese architectural style with two halls and one courtyard. The front hall is lower than the rear one. Large-scale spiral incenses are hanging from the ceiling to attract the attention of two gods, which represent wish for wellbeing. An exquisite wooden sedan chair was made in 1862. When important events happen, people will put statues of gods on the sedan.The courtyard between the two halls has been fully covered by eaves of roofs, which are propping up by granite columns at four corners of the courtyard. The courtyard is franked by two side chambers, which have gabled roofs. 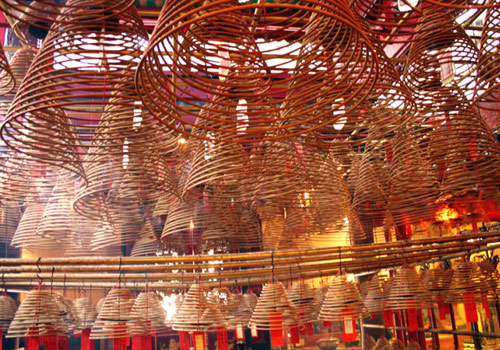 Lit Shing Kung stands on the left of the Man Mo Temple with a structure of three halls and two courtyards. The Kung Sor is a simple building with its well preserved granite door frame. The Man Mo Temple Complex is impressively decorated with delicate ceramic figurines, granite carving, wood carving, and murals, showing the traditional superior craftsmanship.


Besides, there are fortune sticks and fortune tellers for people checking out their fortunes. Some people prepare fruits, joss sticks and candles to offer sacrifice to the gods. Apart from the two gods, other gods are also enshrined, such as the city god, the representative of justice – Bao Zhen, an upright official in ancient China. When libation ceremony occurs, the temples are overwhelmed by the deafening sound of gongs and drums.


Nowadays, to show a true confession, one just needs to hold up hand and take an oath ahead of the commissioner. But at the early days when Hong Kong was open to the outside, there is only one way to make a legally valid oath, that is to burn yellow joss papers and behead a cock in the Kung Sor. 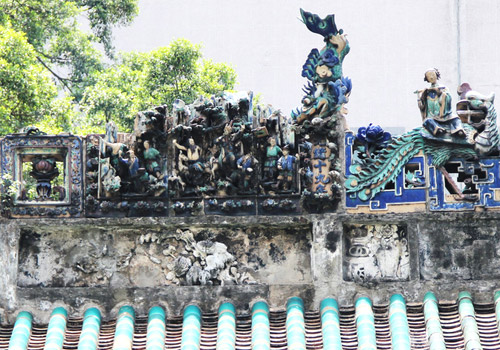 In 1918, two merchants went to the court for debt affairs but failed due to a lack of evidence. Therefore, they came to Man Mo Temple to ‘behead a cock", accompanying with an advisor and a lawyer. Upon arrival in the temple, neither the accuser nor the defendant was willing to swear. Finally the judge drew a verdict that the defendant was innocent but the accuser was guilty. The incident stirred up the whole Hong Kong. Not until the judicature of Hong Kong was improved did the rite fade away. However, there are still some people choose to "Zhan Ji Tou" to settle disputes.