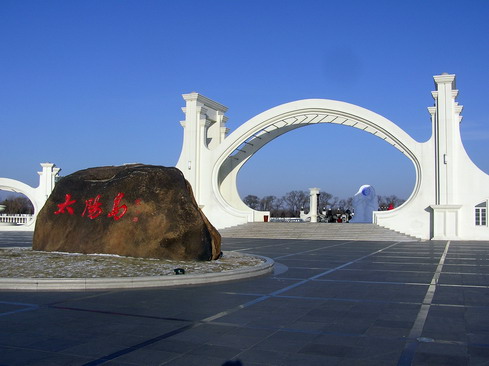 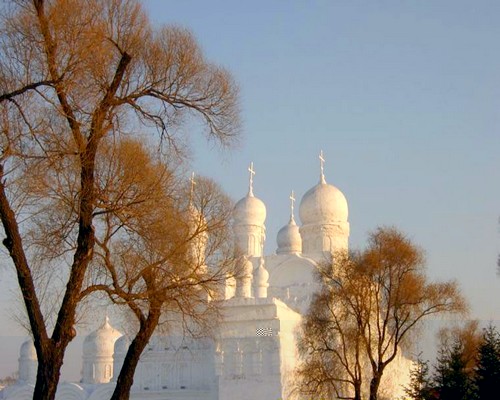 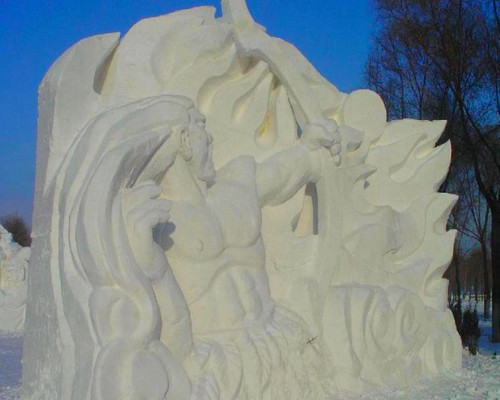 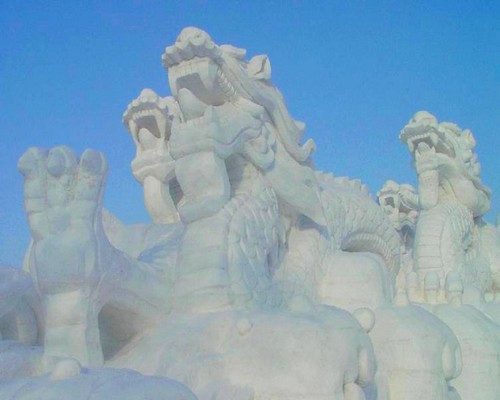 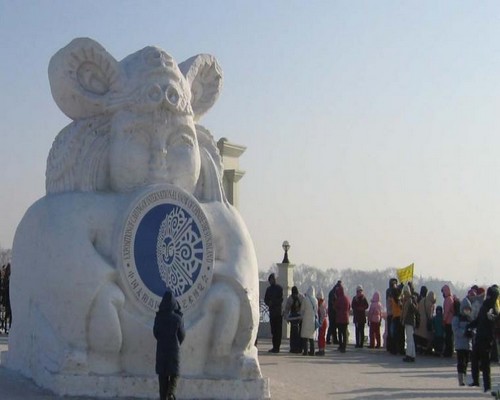 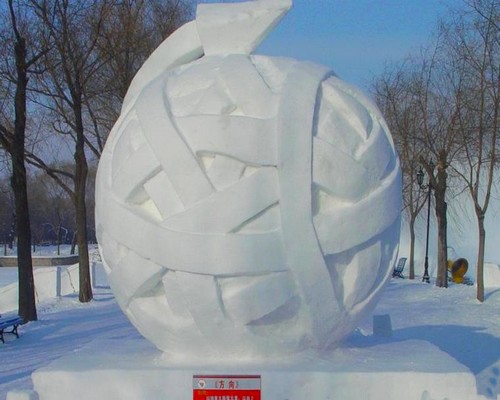 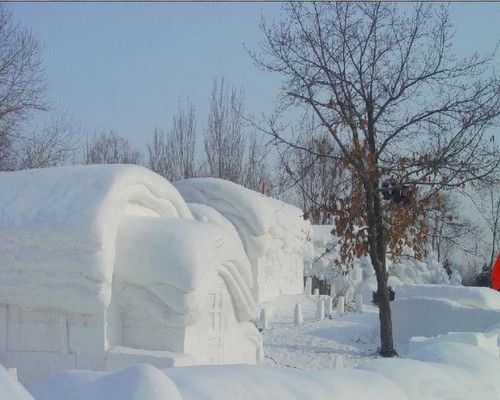 Chinese name: 太阳岛风景区 (Taiyangdao Fengjingqu)
Location: on the north bank of Songhua River, facing the bustling downtown on the other side of the river.
Opening Time: 08:00-17:00
Tickets: CNY30 for entry ticket, CNY50 for the Snow Sculpture Exposition during the Harbin Ice Festival from Jan.5th to the end of February.
How to get there: take trolley-buses No.101, 102 and 103 or buses No.13 and 79, and then transfer to cruise line to the park; or take the through tourist buses at the Youyi Road (Chinese:友谊路).

Covering about 88 square kilometers, awarded as a national 5A scenic spot as well as a title of "National Tourism Business Card", the Sun Island Scenic Area is a famous summer resort in China as well as a featured river floodplain wetland grassland-type scenic spot. Also, it is the permanent site for the Snow Sculpture Exposition, one of the key activities for Harbin Ice Festival happens from every Jan.5th to the end of February. 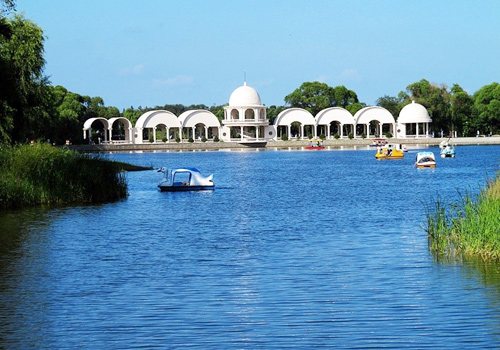 The Sun Island was commonly known by people in 1980s by the beautiful song On the Sun Island, which described the taste of the island and sung by the famous singer Zheng Xulan. Afterwards, the attractive beauty of Sun Island is appeal to more and more visitors to the island. It is a charming island surrounded by green waters with simple, unspoiled and wild landscape. The beauties of four seasons on the island are rather distinct and characteristic. Flowers in full bloom dancing with green grass, greenery branches house species of birds that are chanting, clear springs and waterfalls are all the beauties in the full-prosperity spring picture; in summer, the island is a blaze of color with fragrant flowers and the cool breeze; in autumn, Sun Island is dotted as a gorgeous fairyland by red leaves while in winter, the pure ice and snow make it a idiomatical landscape complemented by the artistic snow sculptures.

What to see in Sun Island Scenic Area? 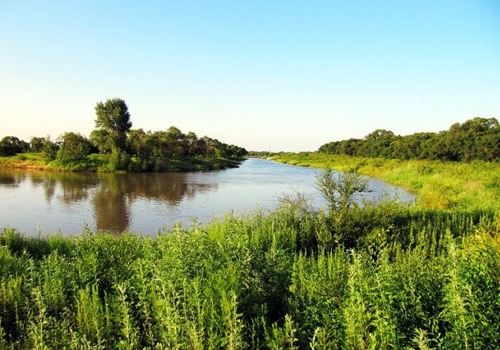 Sun Island Scenic Area is composed by the Sun Island and its neighboring smaller islands and sandbars. Lakes, mountains, springs, waterfalls, pavilions, bridges, lotus, fish, flowers and wild animals, the Sun Island is offering all this and more. There are over 20 scenic spots on the island, including the Pavilion on the Water, the Red-crowned Cranes, the Doe and its Young, the Squirrel Island, the Weeping Willow on the Long Bank, etc. and also, featured landscapes are built in the area like Sun Mount, Sun Lake, Sun Waterfall, Lotus Lake, Sisters Bridge, Pavilion Bridge, White Jade Bridge, Shangwu Bridge, Children's Amusement Park, Clove Garden, Flower Garden, Zhi Stone on the Sun Island, the Jinjiang Gallery, and the Landscape Line along the River.

The island in winter is just a dreamlike fairy world all covered by ice and snow, and the Snow Sculpture Exposition adds more to the island’s beauty with marvelous and magnificent ice art and snow sculptures. The Snow Sculpture Exposition, the birthplace of China’s ice and snow sculptures, together with the Ice Lantern Garden held in Zhaolin Park, the Great Snow and Ice World by the Songhua River, and the Large-scale Ice Sculpture Exhibition in Stalin Park, belong to the world famed Harbin Ice Festival that held annually from Jan.5th to the end of February. 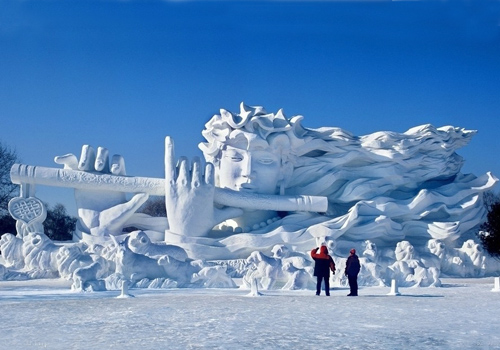 The first exposition was held in 1985, for over 20 years, it has been developed to the largest with highest artistic level of the snow sculpture exhibits in the country. Some incredible works created in previous expositions are still impressive and lingering in people’s minds, such as the "Ten Thousand Horses Steeds Gallop", "Shepherd’s Melody" and "Monarch’s Patrol". In 2009, an indoor Ice and Snow Art Gallery was finished in the island, which is regarded as the largest one in the world with an area of 5000 square meters and an indoor clear height of 7 meters. Today, no matter what time in the island, severe winter or hot summer, the exquisite ice art works also can be appreciated in the gallery.

Every year during the Snow Sculpture Exposition, a series of exciting ice activities also held on the island, such as sledding, iceboating, sliding on the ice, ice hockey, and so on.