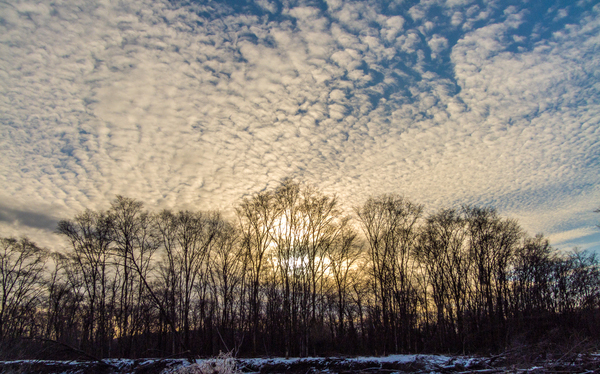 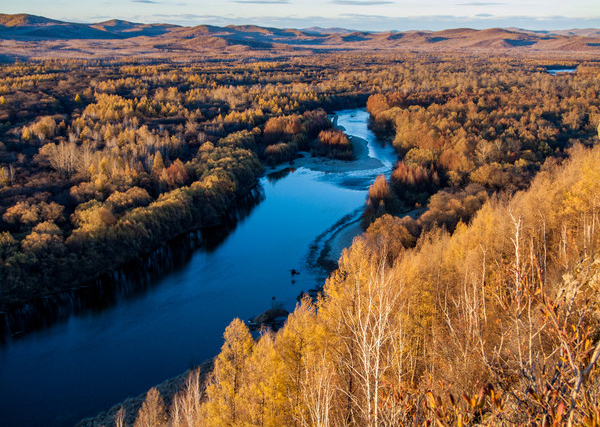 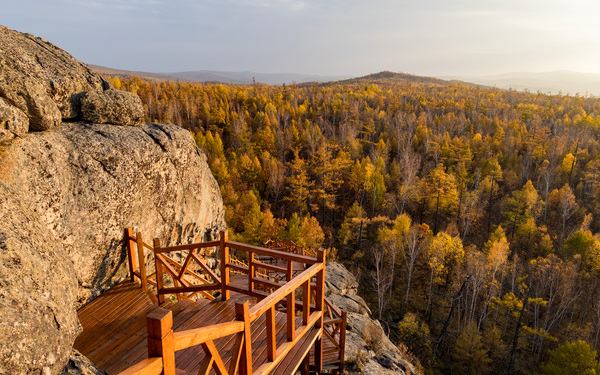 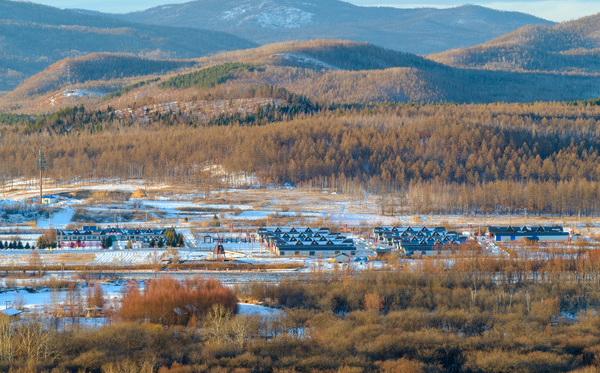 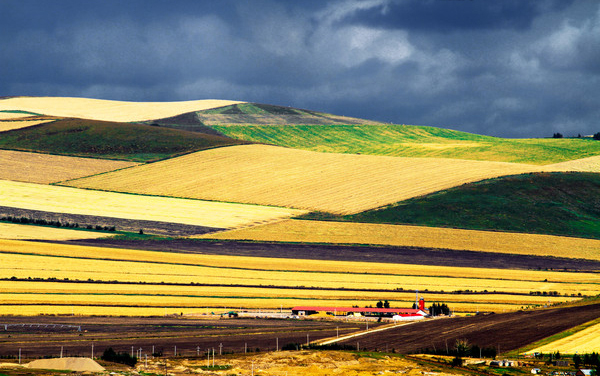 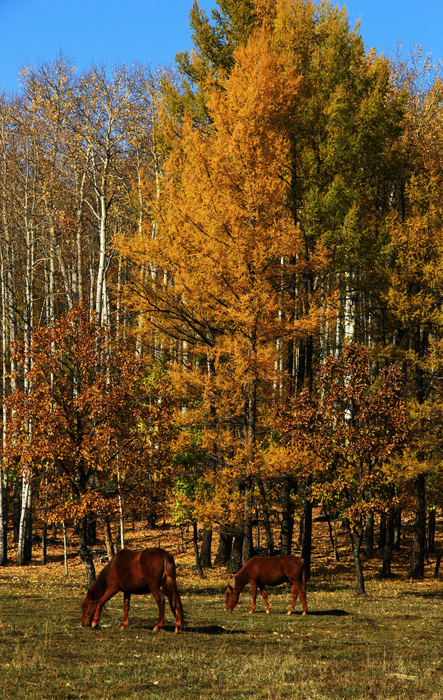 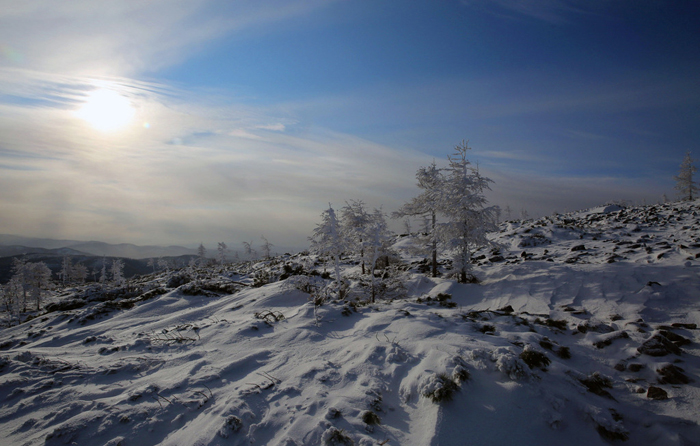 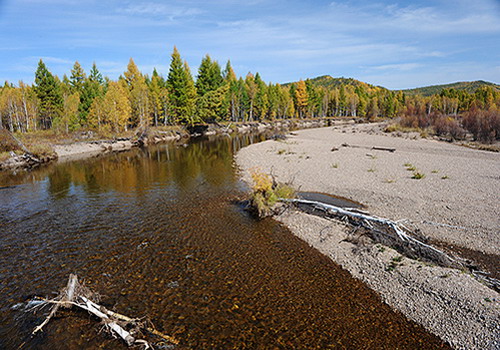 By air: Jiagedaqi has the only airport near the Greater Khingan Mountain Areas, guest can find flight to there then visit the area with other transportation vehicles. The airport in Mohe County is being built.

By train: The first travel stop for most of the tourists visiting the Great Higgnan Mountains is Mohe county, the train from Harbin to Jiagedaqi lasts 9 hours, then change the train to Mohe, it costs another 10 hours.

By car: The Jiagedaqi – Tahe – Mohe high-quality road is finished, tourist can drive own or rent car and visit the smell of the forests and folk customs at Greater Khingan Mountain Areas.

Introduction of the Greater Khingan Mountains:

The Greater Higgnan Mountains is called 'the Last Pure Land Remained' and 'the Green Treasure-house'. In spring, red azaleas are everywhere, in summer, the smells of the forests float in the air, in autumn, the forests and everything is covered with beautiful colors and in winter, the mountains and the pines are made up by silver pigments.

The mountain is rich in resources. Here many precious species exists like the Hucho, Brachymystax Lenok, etc. Local people are kidding that 'washing clothes with a stick in the river kills the river deer, using a bowl to bail the water in the river brings you fishes together, the wild chicken will fly into your rice-cooker', it is only a serious way to show the rich of the products at the Great Khingan Mountains. Only Chinese knows it was called 'Bei Da Huang' here, means the very poor and wild north lands, but now, the area is known as the 'Bei Da Cang', meaning the biggest granary in the north, the food produced here equals the 1/9 of the total world's food production in this area, the black mud land here is the gift given by the god. 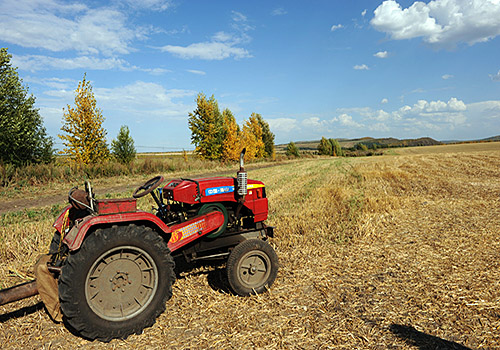 The center of the tourism resources is Jiagedaqi (it is called the city of forests in the north). The western part of the Great Khingan Mountains brings tourists the local culture of Oroqen ethnic minority people when visiting the GaXian cavity, the north part is the famous 'Arctic Village' at Mohe county, people can visit the borderline of China and Russia at the boarder of Huma county. Many tourism resources can be found here, including the Temperate-frigid National Forest natural Preservation Areas in middle of Huhhot area, the Wet Land of South Weng River, rafting at Duobukuer River, etc. 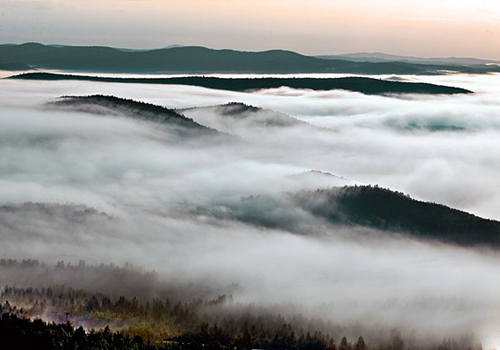 Mohe village is located on the north of the Great Khingan Mountains, this village is the northern extreme of China and it is called the Arctic Village of China. The mystical northern lights can be seen here so the village is called a city without darkness.

Hohe means desert river in Chinese, all four seasons here are chilly winter, the summer of Hohe village only lasts about half a month, the daytime is over 19 hours a day! If you are lucky enough, you can witness the northern lights in China only at Hohe. The arctic village shows the classic northern city landscapes, the frozen world, the galloping gliding in a one-horse sleigh, etc. 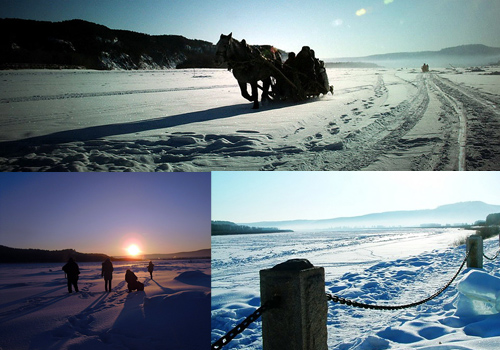 Luoguhe (Luogu River, Luoguhe Village, 洛古河): The name of the village shares the same name of the river; it is of over 90 year’s history and with over 36 families there. As the headstream of Heilong jiang River, the river is over 200 kilometers, with a depth from 1 meter to 12 meters.

Yanzhi Gou (Means the rouge ravine in Chinese, 胭脂沟): It is the only way which must be passed to the Mohe Village; the place was used for gold mining.

1. Itinerary for travel to the Greater Higgnan Mountains: Tourist will pass by Jiagedaqi city from Harbin to Mohe, so they can visit the Gaxian Cave at Jiagedaqi, enjoy the folk culture of of Oroqen ethnic minority people and stay overnight there. On the second day, guests may take the train to Mohe village, and then hire local coach to the main attractions there (the First Watch at the Northern Extreme of China, the River on the Borderline of China and Russia, the Northern Lights, etc.

2. Accommodation condition is not good at Mohe, the village only has small guesthouse costs about RMB40 per night per bed.

3. Clothes and Equipments: Mohe and Greater Higgnan Mountain Areas is of extreme cold temperature, -30 to -40 degree centigrade are quite common in winter. Thick cotton clothes, thermal underwear, old wadded cotton trousers, hat that protecting your ears are must. You should wear larger shoes in order to wear 3-4 layers of stockings, at least two layers of gloves, etc. Protect your cameras well and keep it warm or they will hard to be used. Pens can not be used here as the ink is frozen.