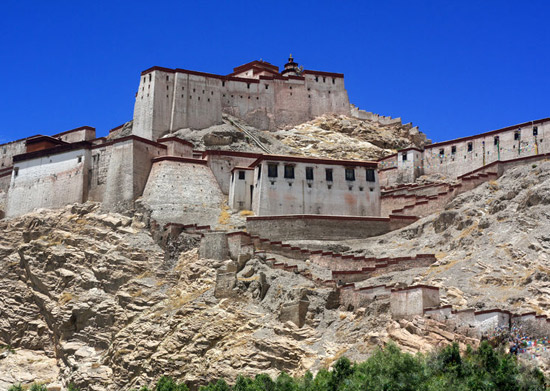 Located in Tibet, south-west of the capital Lhasa, Gyangtse is a county that stretches over 3,800 kilometers and has a population of over 60,000 people. This county is one of the most unique in Tibet, its important geographic position sitting between the Gangdise Mountains and the Himalayas means that it has been an important cultural, economic and tourists center since ancient times. Rug, carpet, tapestry and spun gold hat are very famous for its exquisite workmanship. Gyangtse translated from Tibetan as fortress of victory. The county acquired the name after the invasion from a British expeditionary force in 1904 and remnants of the disused British barracks still exist today. In the center of the city sits Zongshan Mountain, a towering and holy mountain which has built on top of it a pagoda which was the stronghold against the British invasion, in 1962 it was listed as a key historical relic by the Central Government. The pagoda on the mountain is the only religionary pagoda in Tibet; it has 9 levels, and reaches 30 meters high with 77 rooms and thousands of religious artifacts held within it. Inside the pagoda there are more than 10,000 figures of Buddha... More information about Gyangtse » 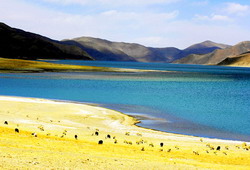 Yomdrok Lake, less than 100 kilometres away from Lhasa, is reputed as one of the three sacred lakes in tibet, as well as the the largest inland lakes at the north foot of Himalayas. Known as the most beautiful water around the world, Yomdrok Lake looks like a fairy land where plateau lakes, snow mountains, pastures, hot springs, flora and fauna, temple are all available. 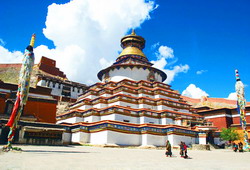 No trip to Gyantse would be complete without a visit to Palkhor Monastery. Located in the northeast of Gyantse at 3900 meters above sea level, Pelkor Chode Monastery, or Palkhor Monastery in Tibetan means auspicious monastery. It was first built in early 15th century and took 10 years to complete. 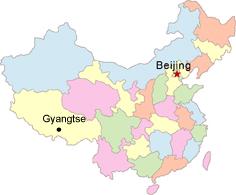