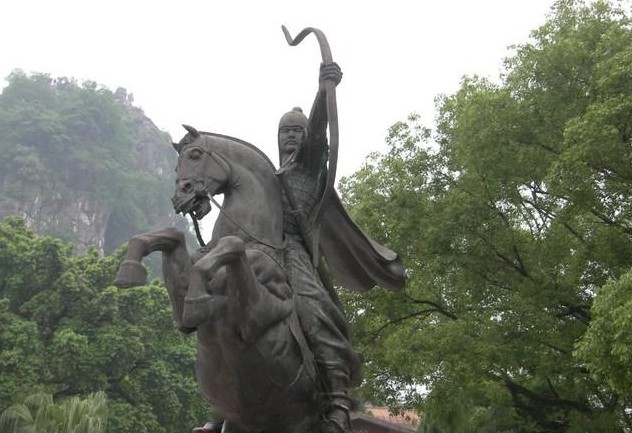 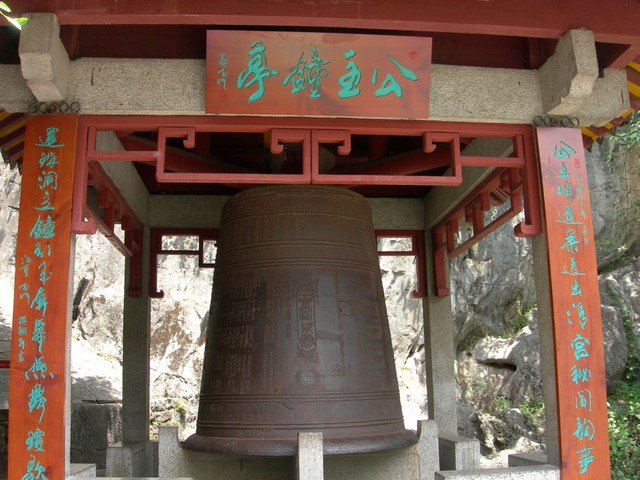 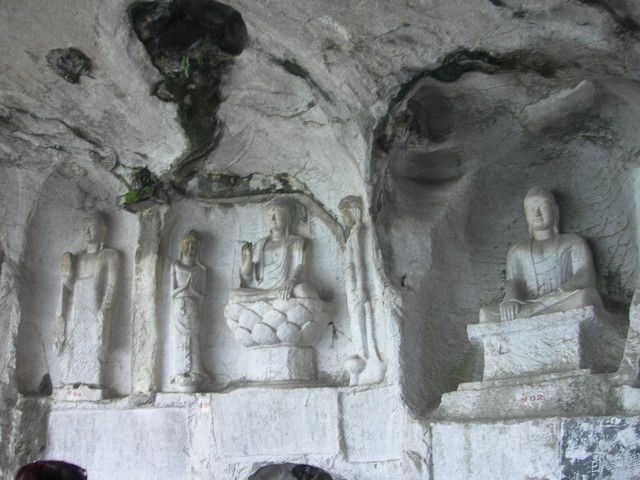 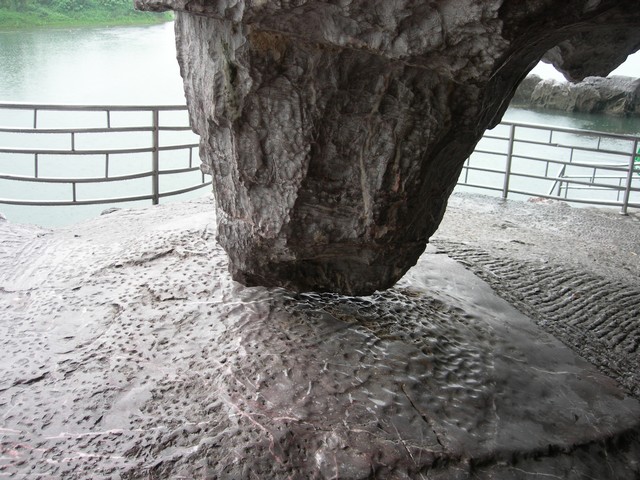 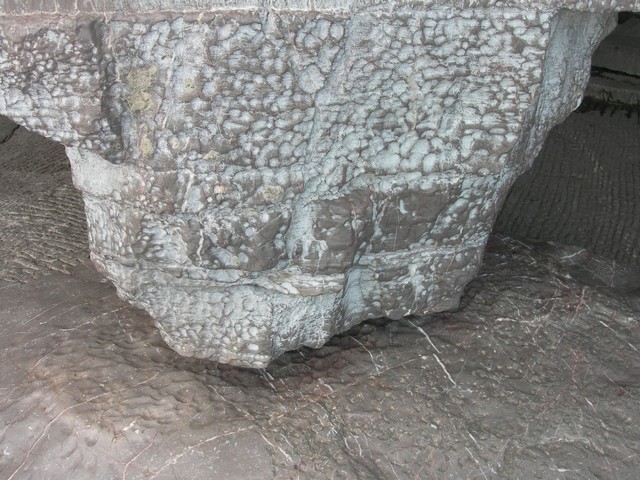 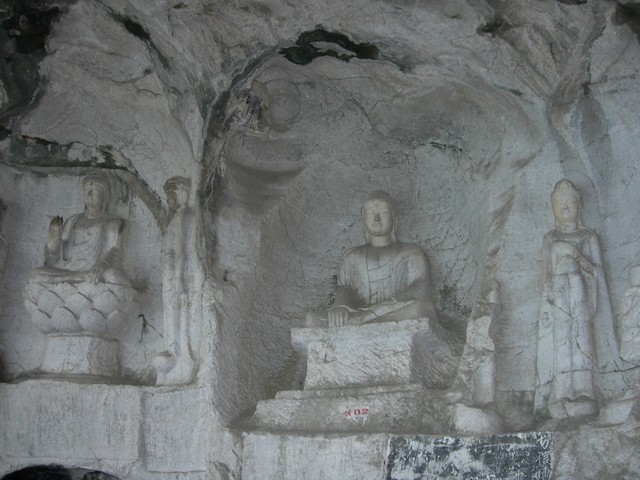 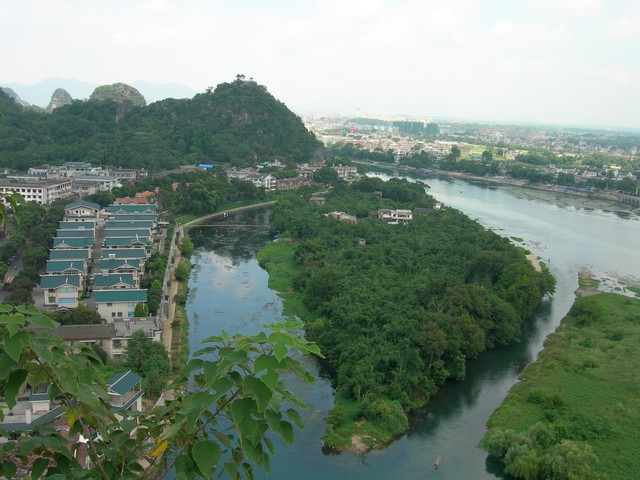 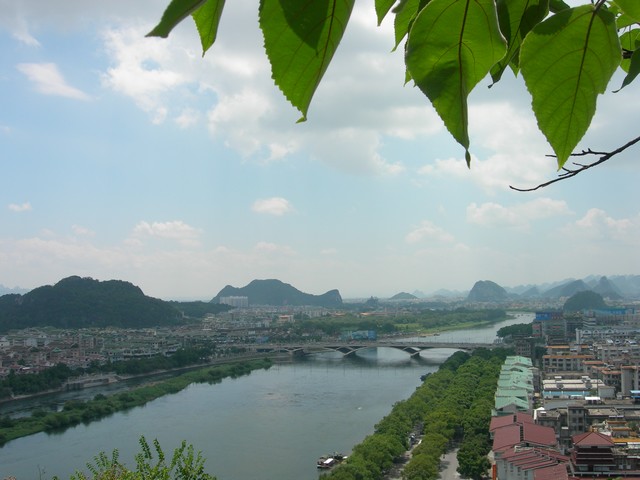 
At the entrance of the Fubo Hill stands an ancient temple bell (a popular place for photos), this bell was made inside the Guilin's Fubo Park in Qing Dynasty of ancient China with a series exquisite inscriptions etched onto its surface. It is said that the bell has a weight of over 1,000 kilograms making the task of fixing it within a belfry difficult.

Parts of the cave wall in the Fubo Hill scenic spot are covered with Buddhist carvings; Fubo Hill's famous Thousand Buddhas Cave is nationally renowned for its rich array of ancient Buddhist carvings, they are really beautiful and worth a visit. Some carvings are so old and worn that you can just see the basic shape, however the cave still echoes with the sounds of ancient scholars. 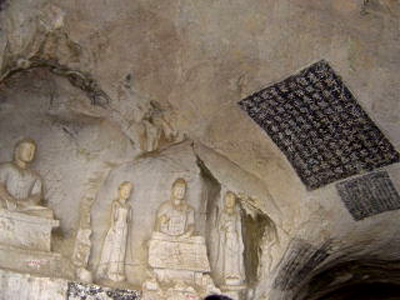 In the summer months, Fubo hill attracts a lot of locals as sit rests on the banks of the Li river, and sweltering locals bring their radios, swimmers and umbrellas and enjoy an afternoon of relaxing swimming and popsicles. The deeper one gets down into the caves, the cooler it is, with nice breeze blowing through it. At the narrowest part of the cave, you will feel that the breeze strong pushing again your chest. 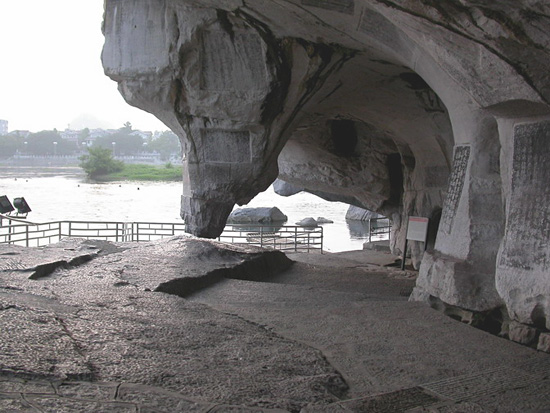 Inside the Pearl-returning Cave is a most rare geological oddity - the Sword-testing Rock. A huge stone pillar hanging down with a large upper body and a smaller lower end. Seen from afar, it looks like a pillar plunging from the ceiling into the water surface. At a closer look, surprisingly, it actually hangs just over an inch above the water and seems to be cut by sharp sword, touch the mound is foretold to bring good fortune.

Legend has it that the General Fubo tested his sword on the rock, which gave it its present shape. When the general negotiated with the enemy generals in the Pearl-returning Cave and reached a deadlock, he drew the sword and cut rocks off the huge pillar. The opponents were scared and immediately retreated.

"How far do you want us to turn back?'" they asked.

"Back to where my arrow falls.'" the general replied.

General Fubo climbed up to the Fubo Hill and shot his arrow, which flew a distance of three hills till it landed on the field from which the offenders had originally come. The offenders retreated as agreed. From then on, the rock was known as 'Sword-Testing' in honor of the valiant general.

This unique geological phenomenon is due to the limestone that covers the mountains, streams flow along it and cause corrosion, and a rift was thus formed. Today, since there is no more corrosion, the pillar cannot produce any deposits, and the rock will retain its odd shape forever.

From the top of the Fubo Peak it is possible to view Guilin's cityscape and thoroughly worth the often challenging climb, tourists gathering into the narrow hill ladders, up or down, domestic tourist or foreigners are often swap stories or wave a friendly hello.

The top of Fubo Peak offers glorious views of the Li River, completed with long trains of holiday vessels petering gentle up and down the, and dawn or dusk the surrounds of dead silent offering visitors a chance to enjoy one of China's last undeveloped havens and fully bask in the serenity of nature.

How to get to the Fubo Hill?
The Fubo hill is just next to the Fobo Hill Hotel, if you are in the central square of Guilin, you take a taxi or walk down by Binjiang road, after about 200 meters down the Jiefang Bridge  (Liberation Bridge), dominates the landscape of the right, tickets must be purchased before entry.