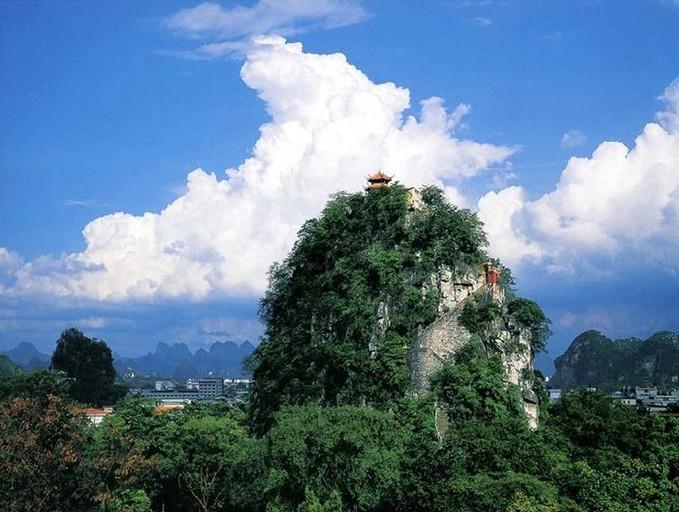 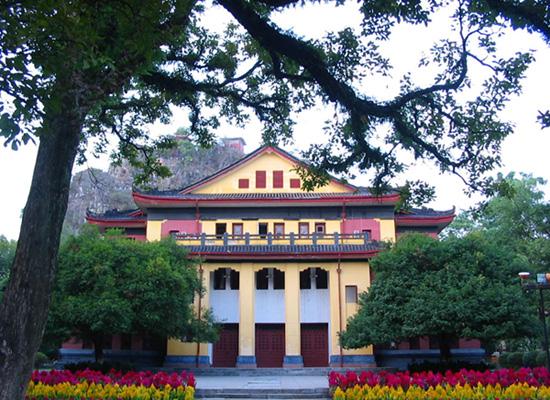 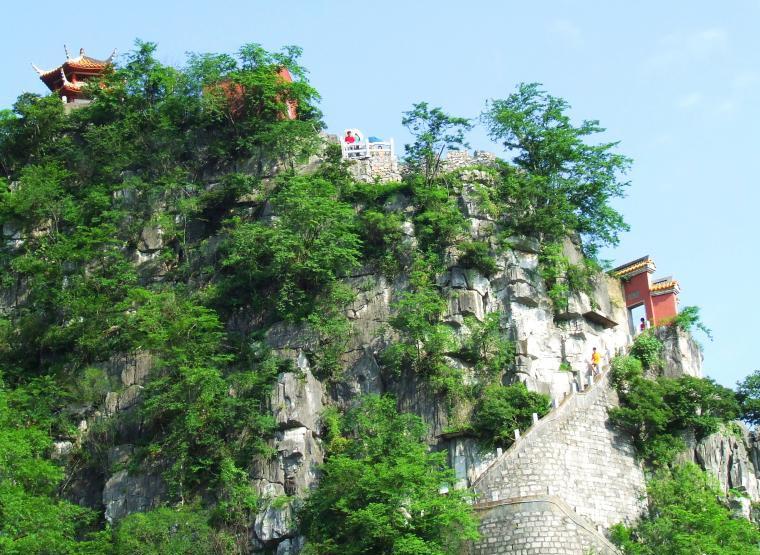 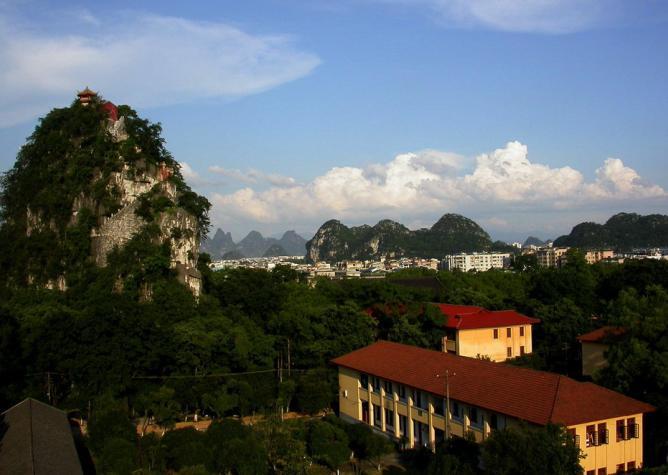 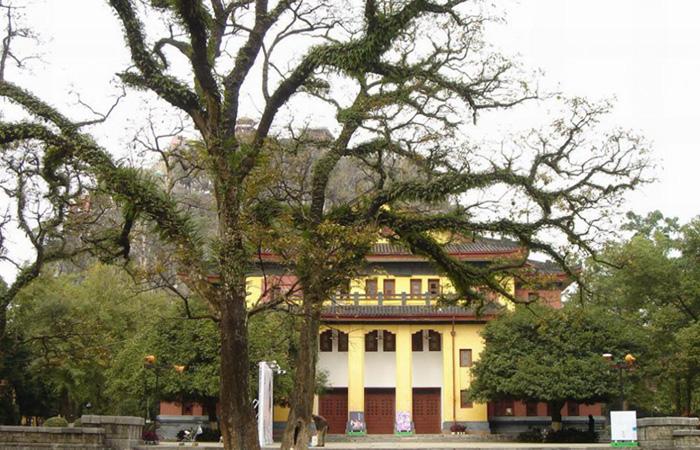 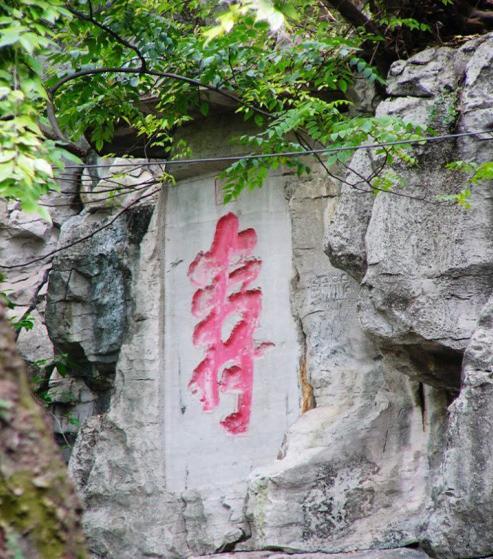 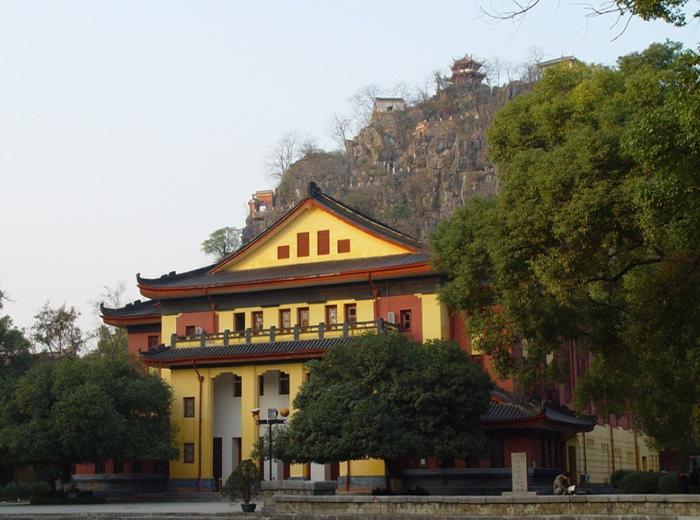 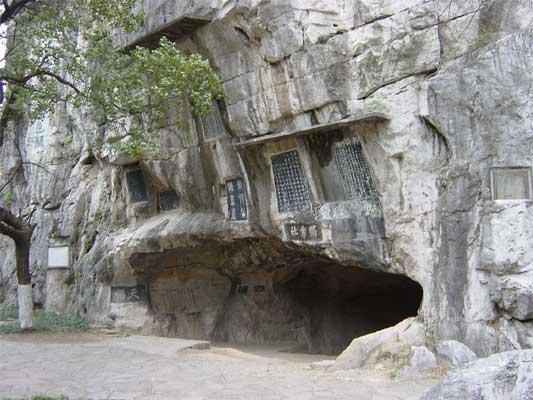 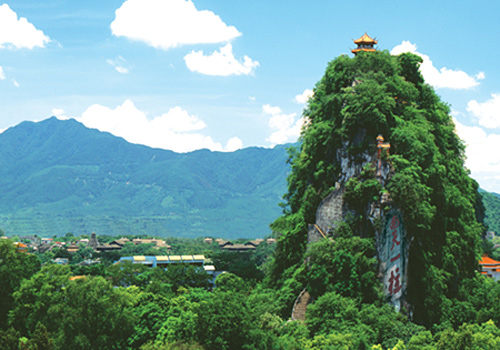 What makes the particularity of this peak is also the presence of the Xuanwu Pavilion (玄武阁 Xuan Wu Ge), Kwanyin Pavilion (观音阁, Guan Yin Ge), Three Guests Temple (三客庙, San Ke Miao) and Three Gods Memorial Temple (三仙祠, San Xian Ci) elegantly dotted on the peak and that can be seen from far away in the cityscape. The Solitary Beauty Pavilion (独秀亭, Du Xiu Ting) located at the top is a 7-meter-high (about 23 feet), 2 floors and pillars supported building built in ancient times, a visit giving a deep impression over the ancient past of Guilin city where officials and royal people used to relax far away from the turmoil of the ground. 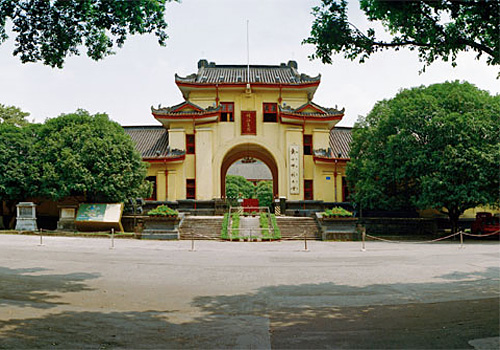 Jingjiang Prince Mansion
With years, history around the Solitary Beauty Peak has been recollected mainly thanks to the glorious past of the Jingjiang Prince's ruling the city during the Ming Dynasty (1368-1644). The Prince's mansion in the city had been set in ancient times around the karstic peak for its beauty and high scenic view over the city.

Jingjiang Prince Mansion had been built when Zhu Shouqian, the grandnephew of the first emperor of the Ming Dynasty Zhu Yuanzhang, was named King of Jingjiang. It is the most well-preserved Ming dynasty princes’ mansion in China, and is now a national key cultural relics protection unit.

The Mansion has a history of more than 630 years, which is even longer than the Forbidden City in Beijing. The construction of the entire mansion lasted more than 20 years, covering an area of 19.78 hectares. Built with square bluestones inside and outside, the mansion is very strong, and 14 princes had been lived here successively. 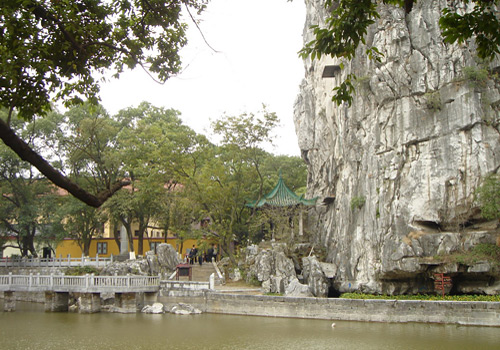 Caves and Stone Inscriptions
The site is also home to many distinctive caves and rocks like the Dushu (读书, studying or reading) Cave on the eastern foot of the peak, looking astonishingly like a stone room with natural windows and beds. The place was said to have been a shelter to the famous Guilin governor and writer Yan Tingzhi, 1500 years ago, which is a fact giving an even more precious signification to the scenic area. The western foot of the peak is also the place where to see the Taiping (太平, peace) Cave covering an area of 140 square meters and filled with curious stalactites of various shapes and "Taisui" and poets' stone inscriptions declaring the beauty of Guilin by the famous "桂林山水甲天下" (Gui Lin Shan Shui Jia Tian Xia) saying, meaning: "the rivers and mountains of Guilin are the best under heaven".