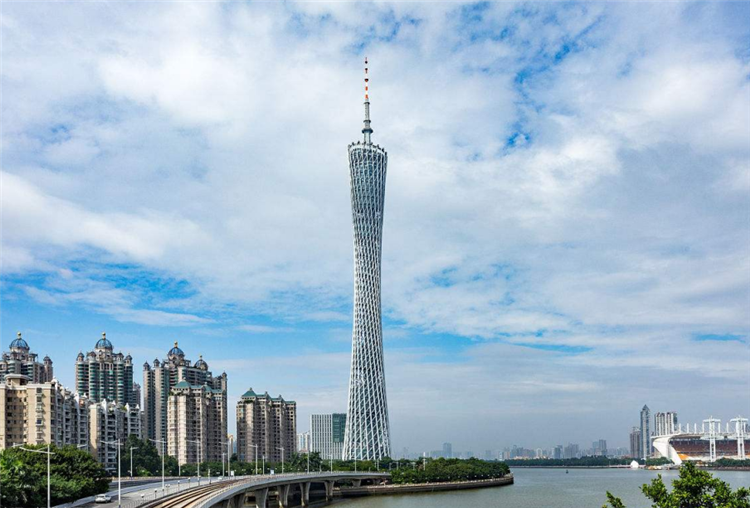 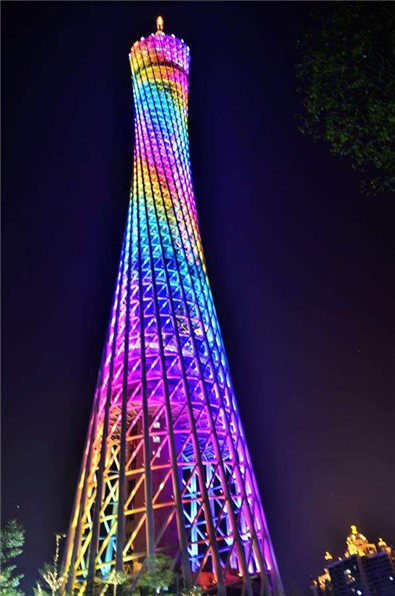 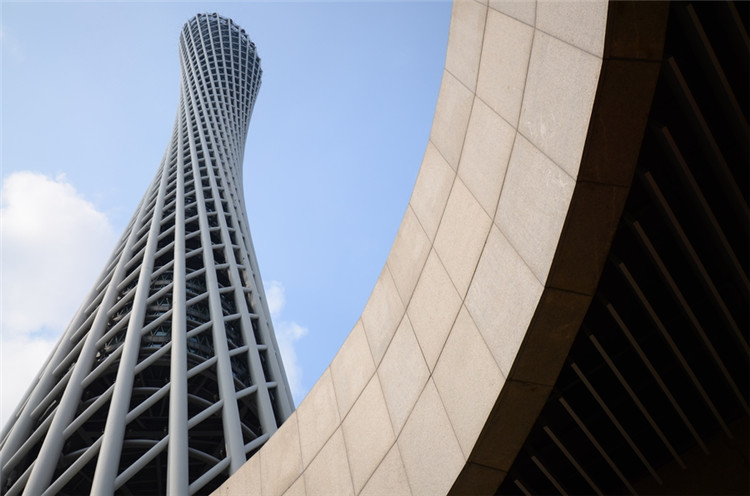 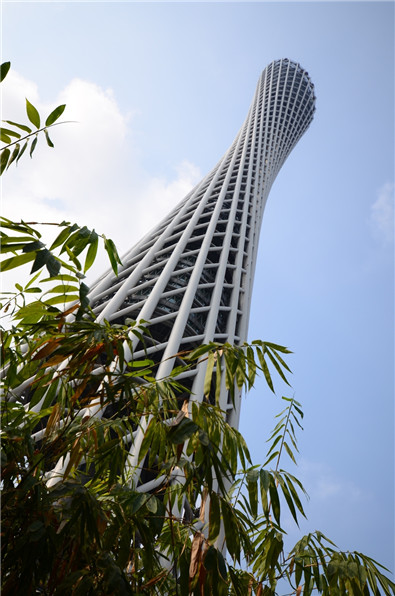 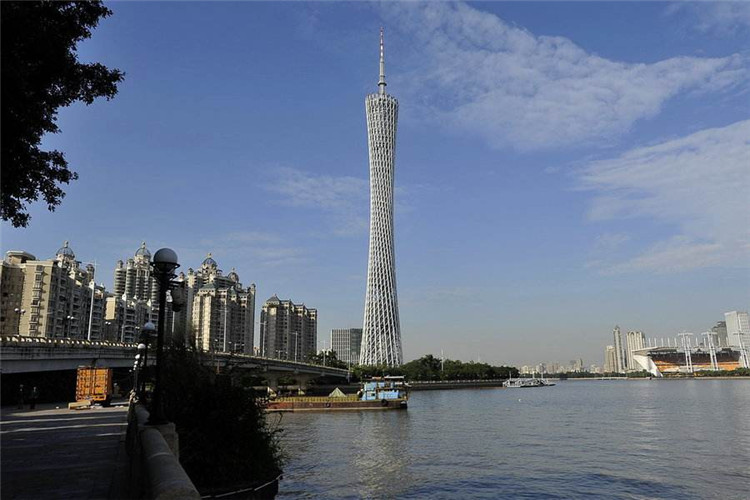 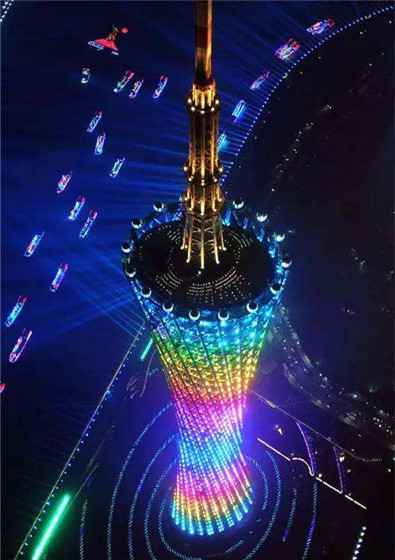 Introduction to Canton Tower
Nicknamed Xiao Man Yao(literally means slim waist), the Canton Tower is also known as Guangzhou New TV Tower. It is located in Haizhu District of Guangzhou city, 125 meters from the south bank of the Pearl River, and faces the Zhujiang New Town and Flower City Square across the river. The main body of the Canton Tower is 454 meters high, and the antenna mast is 146 meters, forming the total height of it 600 meters. It is the tallest tower in China and the fourth tallest one in the world when it is built, only behind the Burj Khalifa Tower (828 meters) in Dubai, the Tokyo Sky Tree (634 meters), and the KVLY Tower(628.8 meters) in North Dakota. 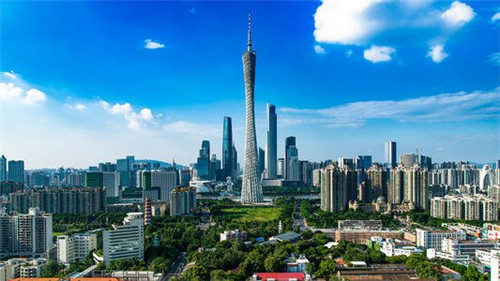 Canton Tower has a total of 88 floors, of which 37 are physical floors, 2 are underground floors and the rest are hollow floors. With a total construction area of 114,054 square meters, the tower was completed in September 2009, and opened to the public on September 30, 2010. On October 1, 2010, China's National Day, it officially opened ticket sales for tourists. Canton Tower has five functional areas and a variety of recreational facilities, including outdoor viewing platform, Ferris wheel, "Sky Drop" downhill entertainment, two sightseeing halls, suspended corridor, sky-walking ladder, 4D and 3D dynamic cinema, Chinese and western restaurants, exhibition facilities, shopping mall and science exhibition hall.

Facilities of Canton Tower
Revolving Restaurant
Located on the 106th floor of Canton Tower, the Xuanji Mediterranean Buffet Restaurant at 422.8 meters high is the world's highest revolving restaurant, which can seat 130-150 people at a time. It was certified by the Guinness World Records in 2014 and rated as "the highest revolving restaurant in a building". The restaurant is designed as an oval circle, with a rotation of some 100 minutes. It takes a dining period as the rotation cycle, to ensure that guests at all locations can fully enjoy the gorgeous scenery of Guangzhou.

488 Outdoor Photography Viewing Platform
The "Sky 488" outdoor photography viewing platform was awarded the honor of "world's highest outdoor viewing platform" by the Guinness World Records in 2013. Located at 488 meters of the antenna mast of the Canton Tower, the platform is the highest point visitors can reach for sightseeing, surpassing the 442-meter outdoor viewing platform of the Burj Khalifa Tower in the United Arab Emirates and the 447-meter Sky-pod of the CN Tower in Canada. The platform covers a total area of 177 square meters and can accommodate more than 20 people at a time. 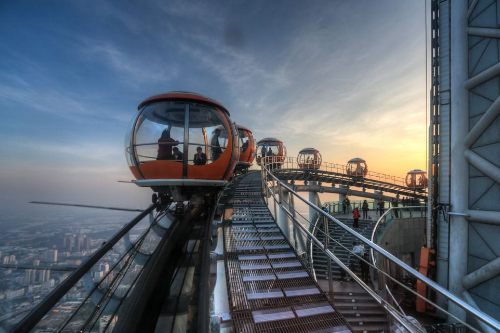 Ferris Wheel
Located at 450-454 meters high, the Canton Tower Ferris Wheel is the highest wheel in the world. Unlike the usual ones, the Canton Tower wheel does not hang from a track, but runs along an inclined track. Running for about 20 minutes a cycle, visitors can see the cityscape of Guangzhou from all angles. The Ferris wheel consists of 16 sightseeing cabins, each of which can accommodate 4-6 passengers.

Spider-Man Sky-walk
The Spider-Man Sky-walk is located at 168-334.4 meters of the Canton Tower, it is the highest and longest sky-walking ladder in the world. The 1088 steps spiral upward around the core of the tower, with a length of about 1,000 meters and a total height of 166.4 meters. There are three transparent hollow glasses on the floor of each step. The sky-walk starts on the 33rd floor and ends on the 62nd floor, and it usually takes 40 minutes to an hour to climb it. 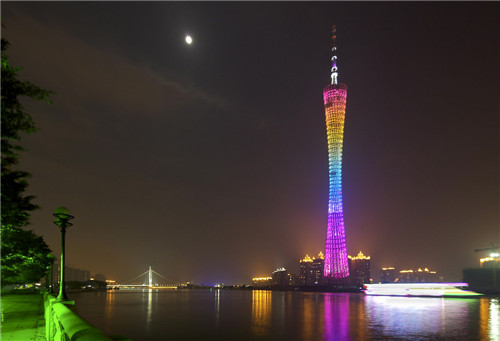 Sky Drop
"Sky Drop" downhill experience at Canton Tower is currently the world's highest vertical downhill entertainment. Located at the ultra-altitude position of the 455-485 meters antenna mast of the Canton Tower, the Sky Drop is 150 meters higher than the 300-meter-high jumping machine in the previous world's highest playground Las Vegas Stratosphere tower. There are two sets of downhill seats on the tower, not only the traditional "sit-jump", but also the "stand-jump" that simulates free-fall. You can experience the precipitous fall of 30 meters in just over one second. Through the jumping, you can not only overlook the beautiful scenery of Guangzhou city, but also experience the high altitude downhill.