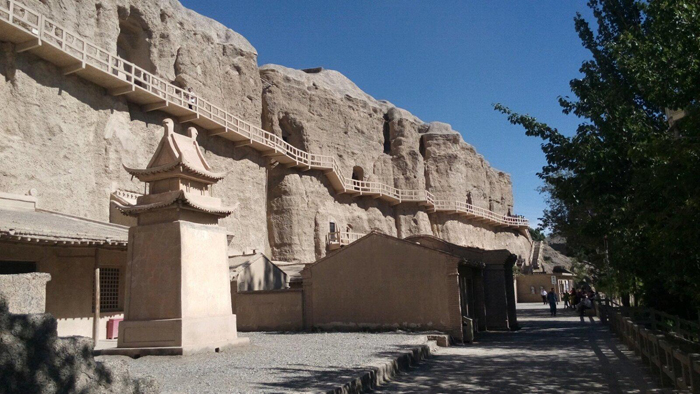 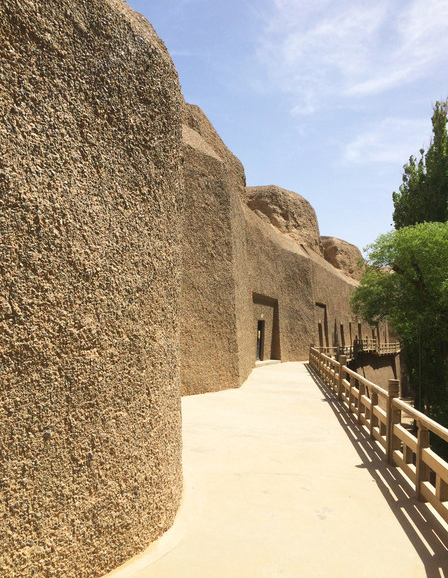 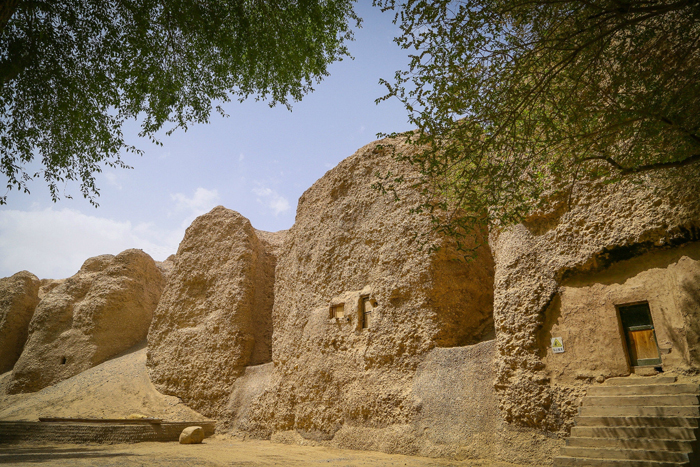 Chinese name: 西千佛洞(Xiqian fodong). Location: located to the west of Mogao Grottoes, 35 kilometers away from Dunhuang city, Gansu Province. Opening time: 08:00-17:00. Entrance fee: CNY45.
How to get there: take taxi or private coach. Best time for visit: from May to October.

Introduction to the Western Thousand-Buddha Cave

As one part of the Mogao Grottoes, the Western Thousand-Buddha Cave is located to the west of Mogao Grottoes and is set into a cliff on the northern bank of the Dang River(党河). Because the frescos in this cave are similar in structure and artistic style to those in Mogao Caves, the Western Thousand-Buddha Cave is considered as one of the important components of Dunhuang Buddhist art. Although the exact ages of the caves have not been known yet, it was said that this cave may have been dug earlier than Mogao Grottoes according to the records stored in Paris.

Due to various natural and man-made destructions, Western Thousand-Buddha Cave has a similar experience of rise and fall with Mogao Grottoes. As a result, the cherished art treasures have suffered heavy losses. In 1980s, some caverns have already in a dreadful state of dilapidation and some of them would even collapse at all times. In recent years, the cave has been repaired and reinforced by the government so that the safe corridors along the cliff offer adequate security to tourists. Today, Western Thousand-Buddha Cave has been effectively protected and some ten caverns are open to the tourists, becoming a necessary spot for traveling from Dunhuang to Yangguan. 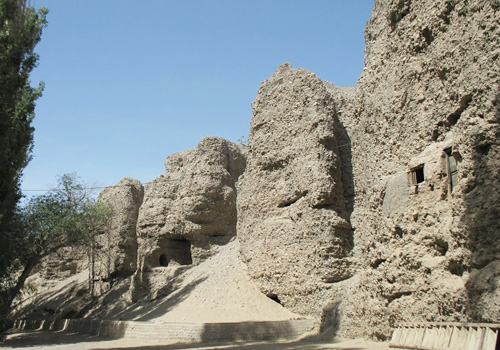 Components of the Western Thousand-Buddha Cave

There are 16 caves, some of the caves were made in Tang Dynasty (618-907) and the others in Wei Dynasty (386-534). Unfortunately, some of the caves have collapsed with murals already eroded. However, about nine caves are still in fair preservation until now. On the walls of these nine well-preserved caves, there are more than 800 square meters of murals and 34 painted clay statues.

When you step into the cave from scorching Gobi Desert, you will immediately feel a slight cool in the air due to a 100-year willow, just like a huge umbrella over your head. Though Western Thousand-Buddha Cave is not so large as Mogao Grottoes, enchanting sceneries, elegant and quiet surroundings place you in a charming retreat. The original route of Dang River has already vanished, but a murmuring brook winds its way in front of the cave, as if playing elegant melody. Furthermore, the colorful murals, vivid Buddha sculptures attract thousands of tourists.

In cave No.4, you can see several large statues which are painted with strong bodies and slender eyebrows. In cave No.5 which was decorated during Wei Dynasty, there is an inscription written by a Buddhist called Tangzang for the figures of his departed grandparents and parents. Moving on to cave No.7, we can see one of the most famous of the cave, a painting Apsaras, a Buddhist god known for dancing and singing, which was painted so vividly that it seems to come to life. In cave No.9, a unique structure shaped like nomad’s yurt, serve as a valuable reference for researching the ethnic customs of Gansu Province. The god Nryana, an outstanding warrior in Buddhist legend, appears painted under some stone statues. 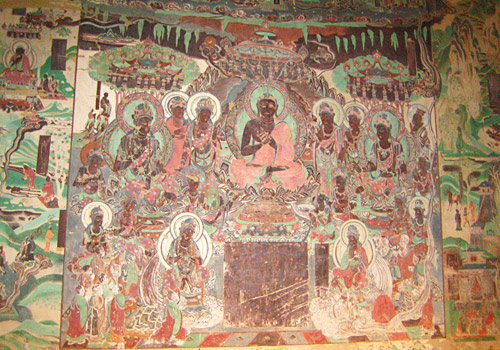 In the caves, many colorful frescos depict informative Buddhist stories, putting these caves among the finest sources of Buddhist art in China.

It is a fresco of Western Wei Dynasty (534-556), in which, two hunters are riding on the horses. The front one is shooting an arrow to a tiger, while the other is hunting three Mongolian gazelles. The ferocious tiger, the scared gazelles and courageous hunters were vividly portrayed in this fresco. Some trees and mountains can be seen as the background of the fresco and some animals and gods in legend were also painted, showing a strong lifelikeness with graceful lines and exaggerated movements. Both the content and style of this fresco give a vivid and lifelike portrayal about traditional nomadic lifestyle in ancient northwest China.

This is an important fresco of late Tang Dynasty. In 848, Zhao Yichao overthrew the Tubo nobles’ rule in Tubo area and then was bestowed by the emperor of Tang Dynasty as the governor of northwest region of ancient China. This is a large fresco with numerous troops and lively scenes, telling about the stories of Zhang Yichao’s journey. In the first part of the fresco, it was painted with a neat honor guard. Then eight dancers in two lines are following the guard. About ten persons with diverse instruments are walking behind the dancers. The last part of the fresco is rearguard of the troop, with some valiant cavalries protecting the flags which were issued by the Emperor. This fresco was based on the real life of northwest people, so it was not fettered by conventional norms. Therefore, it is not only a rare fresco based on real life, but also a picture of great historical value.

This fresco tells the story about Prince Xu Dana. Once upon a time, a king had a white elephant with six long ivories. This elephant was so strong that with its help the king often beat the enemy states. When the enemy states got to know that the Prince Xu Dana loved to do charities, they then asked him for the white elephant. The prince really gave them the elephant as they expected, and as a result, the prince and his wife were expelled by his father. However, the prince was continuing to give charities to others, including his coach, his clothes and even his families. In the end, the prince’s son was found by his grandfather when he was sold, so the prince and his families finally return to their home.