The city of Chongqing is a major metropolis and municipality of southwest China. Standing as one of the five national central cities of the PRC, the city has its own Central Government like Beijing, Shanghai or Tianjin cities. Seen as a key point to increase the interior economic growth, Chongqing is a typical sprawling Chinese city. Located on the confluence of the Yangtze and the Jialing River, the city is a high stop-off and departure point on up or downstream Yangtze River Cruises. Chongqing is situated on the Yunnan-Guizhou Plateau and enjoys a monsoon humid subtropical climate. Literally meaning "double happiness" or "repeated good luck", the city really overpopulates and overstrains. Chongqing is home to different ethnic nationalities among which the Han are the most important one. This city is the archetypal big Chinese city where turmoils of city life give rhythm to everything. 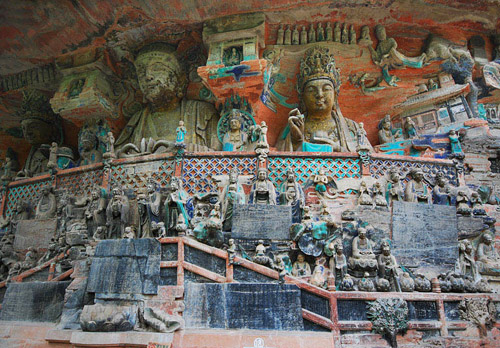 Chongqing is a city that experienced many changes in terms of kingdom, government and names for the past 3000 years. Tracing back to the 11th century BC, the city was governed by the State of Ba and then was overrun later on in 316 BC by the State of Qin. Renamed again and again from Jiangzhou (江州), Chushou (楚州), Yuzhou (渝州) and then Gongzhou (恭州), Chongqing received its current name during the Southern Song Dynasty (1127 - 1279) due to the luck surrounding the local Prince Zhao Dun who became king and then Emperor quickly. As a place of many kingdoms' warfares, Chongqing undertook several rebellions and establishment of rules. The fall of the Ming Dynasty between 1627 and1645 and the immigrations' fleeing to Sichuan were reasons for the huge increase of its population. Its localization on the borders of the Yangtze River inclined towards the position of Chongqing as a big inland commerce port since 1891. During the Second Sino-Japanese War (1937 - 1945), Chongqing was renowned as the Kuomintang wartime capital of General Chiang Kai-shek that was heavily bombed. The post-war industrialization rebuilt Chongqing heavily, making it one of the most industrialized cities of the country. Of a sub-provincial city status within the Sichuan Province in 1954, Chongqing merged then to a municipality on its own in 1997 as Beijing, Tianjin or Shanghai are. The unearthed of stone tools on the Yangtze River borders in 1996 is another testimony of the place's deep existence in history. A tour to Chongqing is a chance to experience the very true meaning of what is really a Chinese industrial city bordering the famous Yangtze River. 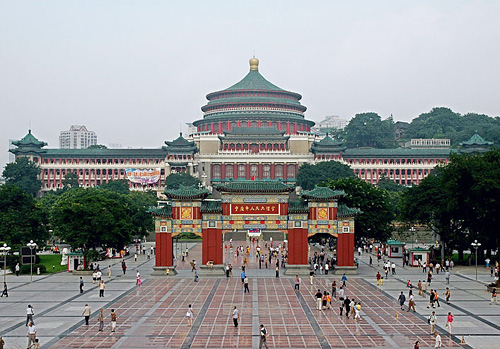 The big industrial city that is Chongqing today offers a bunch of tourist attractions that have to be seen while stopping by. Huge skyscrapers, mountains, parks and historical sites, Chongqing is worth a visit despite its appearance as a foggy city bordering one of the most famous rivers of China. Indeed, the city enjoys some renowned scenic spots such as the Dazu Rock Carvings, Northern Hot Springs Park, the Goose Neck Park and cultural sites such as the People's Assembly Hall and the Three Gorges Museum. The nightlife sight of Chongqing with its myriad of glittering lights contrasting with the clear glistening lights from the waves of the river is a great experience and sightseeing to admire too. But most of the visitors to this city will be attracted by the Jiefangbei district where the Liberation Monument was built after the end of the Second Sino-Japanese War in 1945. Chinese-English signs everywhere in the streets and good transportations facilities make this Yangtze riverside city a tourist-friendly place, where the most usual attraction today may be to take on board for a sumptuous Yangtze River Cruise!