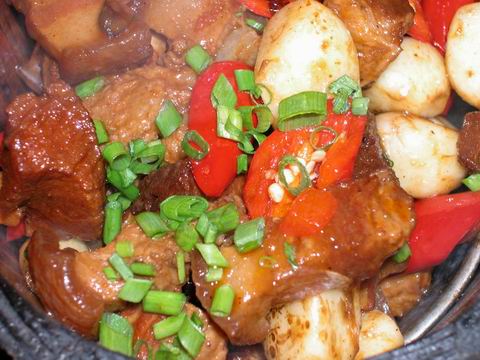 Hunan cuisine, as one of the eight cuisines in China is characterized with plenty of oil and gorgeous outlook. Chefs in Hunan province are adept at making spicy and hot dishes, dried meat, and pickles. Changsha, capital of Hunan province, is the centre of Hunan cuisine and the city of dainties; therefore, city-dwellers in Changsha are well reputed as foodies. Some renowned Hunan cuisine dishes in Changsha are spicy chicken and sesame crisp duck. In the meanwhile, its snacks are as famous as the cuisine. Not only are they countless in number, but also unique in flavor. Stinky tofu is just a typical snack in Changsha that enjoys great popularity.

It is one of the authentic Hunan cuisine dishes. Its golden outlook, tender meat, spicy flavor and fresh smelling will never fail to make you drooling. It is said that one does not try Hunan cuisine unless he eats spicy chicken.

The most famous stinky food in Changsha are in Fire Palace (火宫殿). In the year of 1958, Chairman Mao specially tried the snack here. It tastes crisp at first then tender; if dipped in pepper oil, sesame oil and soybean sauce, it would be better.

Liuyang steam food, originated from eastern part of Liuyang city, has a history of more than six hundred years. As a special class of Hunan cuisine, Liuyang steam food tastes healthy and delicious, and is convenient for many eaters.

- Xieguangtou Restaurant (谢光头辣椒炒肉家菜馆): located in No. 339 West Laodong Road, Tianxin District (天心区劳动西路339号). Though the name of the restaurant is so common that it can be missed easily, it has always been devoted to its specialty "sautéed pork with chilli pepper" which draws numerous visitors home and abroad.

- Some long-standing large restaurants and catering area are in sight in Changsha, including Youyi Xincun of the Second Ring Road, east bank of Xiangjiang, and Jinxiu Square.