Awoke at 6 AM. Earlier I awoke at 1:30 AM and was not able to get back to sleep for hours. Finally did fall asleep but still awoke at 5 AM. Laid in bed until 6 AM. Looking out the window the weather appears to be much the same as it was yesterday, foggy with rain. It looks as though we will miss out on many of the heralded mountain scenes that we were hoping to see. Yes, I enjoyed a nice breakfast. 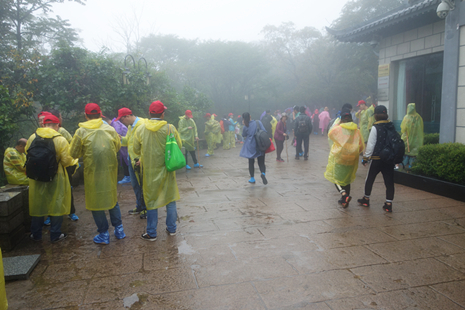 In an area of hotel rooms saw the staff standing at attention before their supervisor. It's a curiosity to me as to where the hotel staff lives. There must be hundreds of staff judging by the size of the hotel. Where do they reside or sleep at night? I don't believe there is a road to the hotel or a small town nearby. Hmmm! They most certainly don't climb up and down the mountain in the manner that we did and will do again. I just asked Cloris about the staff and where they live. She said they live in a dormitory on the hotel grounds. At the end of each month the employees have some time away from work when they can visit their home and family. We await our walk in this steady rain. At 9 AM we met Cloris in the lobby. It's as foggy as yesterday which makes it difficult (impossible?) to see much of anything. We headed out and went up and down stairs for about 20 minutes. We then turned around and back to the hotel we went as it was much too foggy to see anything. We did see some of the granite peaks that pierced the sky but missed most of them. So be it. We still very much enjoyed this part of our travel experience. At 11 AM, Jay and I met Cloris in the lobby for our long trek up and down the mountain, this time with more up than UP.

Off we went in the fog and rain, this time with our backpacks as we checked out of the hotel are returning to Huangshan city. Climbing up and down these steps (mostly up) proved once again to be challenging but we made it after a bit of huffing and puffing. There were people going in each direction many of them looking 'gassed'. Along the way we passed some men carrying supplies to the hotel. Truly a 'grunt walk'. If someone was in their way they would let you know to get out of the way. The cars are set up for a comfortable 4 passengers. We had a 5th passenger. We had a 5th person in our car and his name was 'Otto', a college student with an engineering major who spoke fluent English. Following introductions Otto informed us that he is interested in graduate school at Harvard or Cal Tech. He was also aware of the University of Minnesota which has the largest enrollment of Chinese students of any college or university in the United States. I gave Otto my e-mail address. 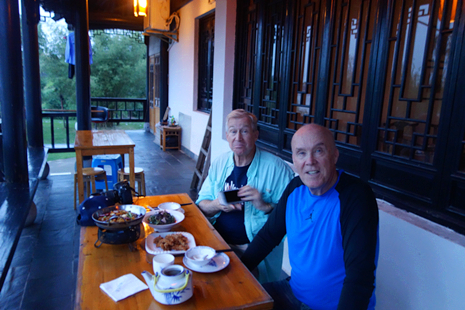 It continues to rain. Following the cable ride down, we boarded the shuttle bus. At the bus terminal, there was our car and driver waiting for us. We're back in Huangshan and we drove to a building where Jay got his full body massage. Following the massage we drove to the restaurant where we ate yesterday when we first met Cloris. Great food! Jay and I dined on an outdoor porch area. Following dinner we were driven to a theater where we then enjoyed a cultural performance. Once again we had seats in one of the front of the auditorium seats. Following the performance, back to our hotel we went. I really enjoyed the show. To bed at 11 PM. 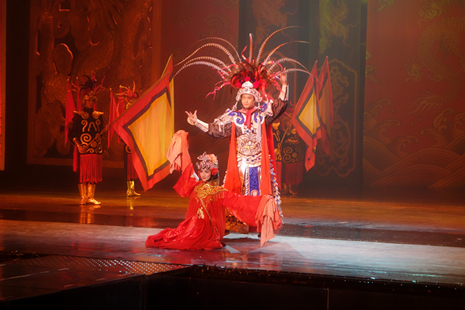