Fruit is an eternal topic for most people, no matter when and where. Spanning a wide latitude of nearly 50 degrees between the Torrid Zone and the North Temperate Zone, China especially South China area is endowed with much advantage in fruit planting. Leave some common fruits such as apple and banana aside, some growing in South China are probably fresh to westerners:
1. Jackfruit (木菠萝 Muboluo, or 菠萝蜜 Boluomi)

Country of origin: India
Jackfruit, a world-famous tropical fruit originally planted in ancient India, was introduced to China during Tang Dynasty (618-907). Growing up to 15-20 meters, the trees usually produce fruits ranging from 5 kg to 20 kg (some even exceed 50 kg) on their trunk. The rind of Jackfruit is covered with small pointed cones. It is the ripe sarcocarp wrapping the seeds offer the delicacy (the unripes can be cooked as vegetable), but the seeds are also edible after being poached.
2. Durian(榴莲 Liulian) 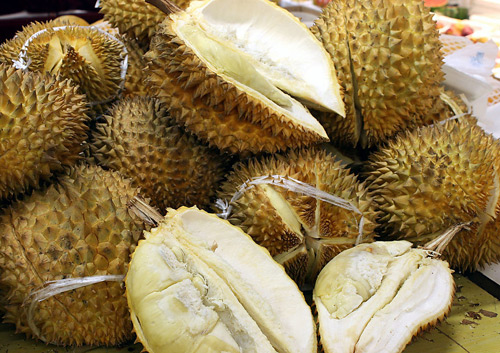 Country of origin: Malaysia
Some people often take jackfruit for durian in China because of their similar outsides. As a matter of fact, durian is lighter and has thicker cones that prevent people from catching it by bare hands. Many people are usually scared of the strong smell of its sarcocarp, which is described to be "the mix of sour cheese and onion with a little bit turpentine" by some people. For this reason it is prohibited to in some public places. However, the increasing crowd of its die-hard fans proves it again that delicious food never deserted by gastronomes.
3. Mangosteen (山竹Shanzhu) 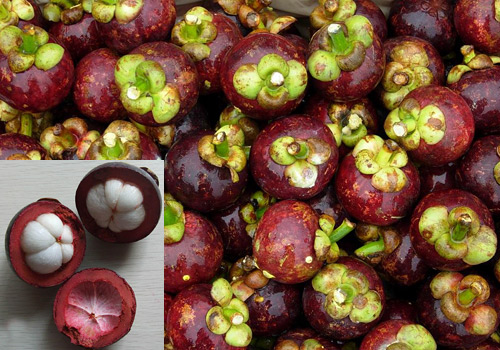 Country of origin: Malaysia
Known as "queen of fruit" in China, mangosteen trees are widely planted in Southeast Asian countries. The price of it is comparatively higher than many other fruits in China as the trees usually take 10 years to fruit after they are planted. A ripe mangosteen is as big as a persimmon, with dark purple and hard peel and garlic clove-like succulent sarcocarp. It is favored by people especially young girls for its sweet and a little bit sour taste and rich nutrition constituent.
4. Pitaya (火龙果 Huolongguo) 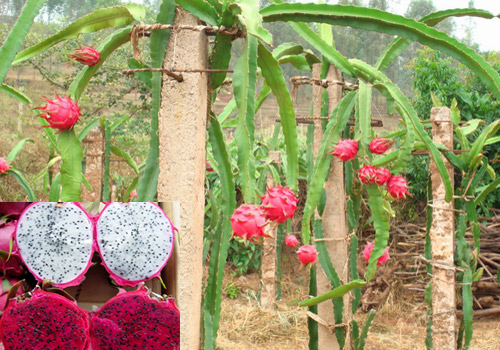 Country of origin: Central America
Pitaya catches people’s sight by its bright rose-colored peel with sparse squamas. Distinctive from most fruits, a pitaya grows on a "tree" that is of Cactaceae instead of an arbor. The sarcocarp is a whole one in white or red with sesame-like seeds. On the other hand, the interesting phenomenon that pitaya trees are found to be planted in the vicinity of many Maya, Inca and Vietnamese temples tempts many people. Is that only a coincidence? Or pitaya has some mysterious relation with religion?
5. Leechee (荔枝 Lizhi) 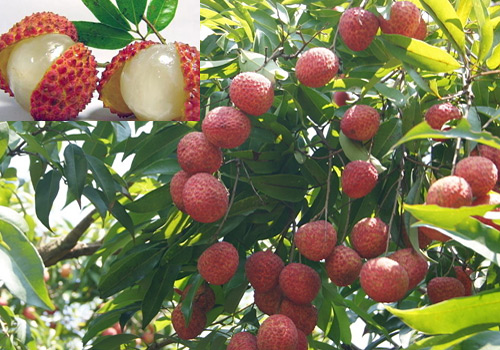 Country of origin: China
Listed among the "four famous fruits of South China" together with banana, pineapple and longan, leechee is a native fruit of China. In Tang Dynasty of China, the Emperor Tangminghuang used to please his beloved concubine Yang Guifei by ordering the imperial servants to transport leechee from Guangdong in South China to Chang’an in Central China. To ensure that the fruits were still fresh after they got back to the imperial palace, the servants always ride a horse at top speed. This story is considered to be a romance in Chinese history and the favorite leechee breed of the concubine – named Feizixiao (妃子笑) – became the best-known In China for over 1000 years.
6. Longan (龙眼 Longyan, or 桂圆 Guiyuan) 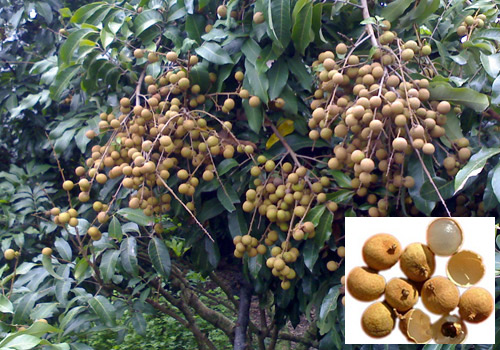 Country of origin: China
Longan has been treated as a famous and precious local product of South China since the ancient times. A ripe longan is usually 1-2 cm in diameter, with a dark core, white sarcocarp and khaki peel from inside to outside. Chinese think longan has restorative effect as ginseng does, so it is often dried and cooked in soup.
--- By Cindy (Vist Our China)
Tags: Chinese fruits Jackfruit Durian Mangosteen Pitaya Leechee Longan

Wow, thanks for the useful introduction about the rare tropical fruits. Some of them is my first time to know, hopefully I can taste them one by one.

Hi Catherine, welcome to VOC's Travel Blog and thanks for your comment. May I guess that you are a big fan of fruits as I am? If yes, South China in summer time would be a fruit paradise for you. May your fruit dream come ture :)