Imperial Tombs of the Ming and Qing Dynasties 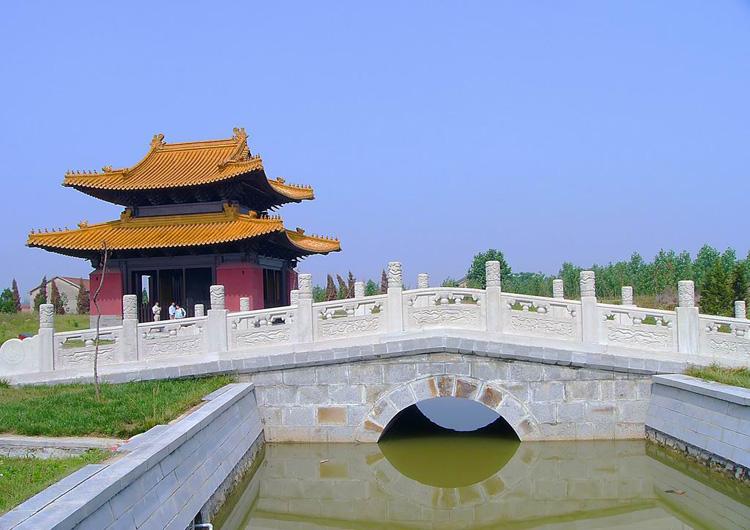 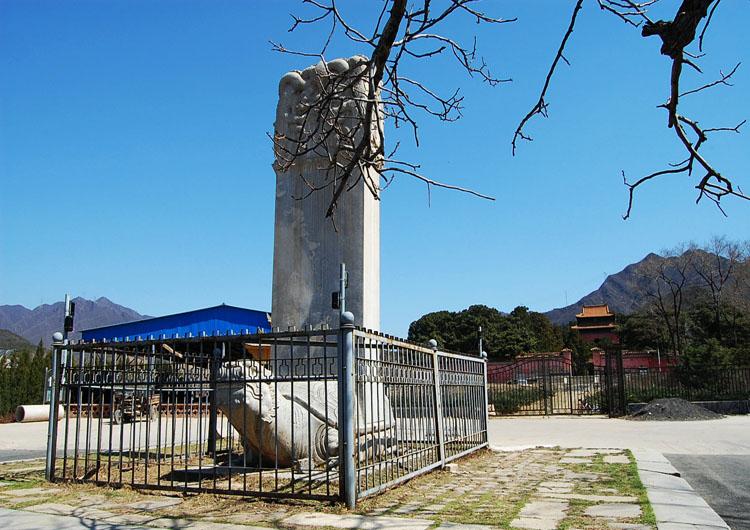 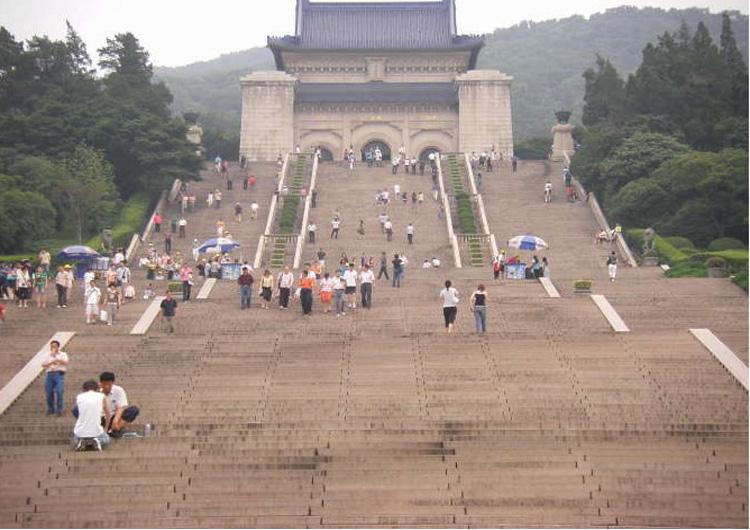 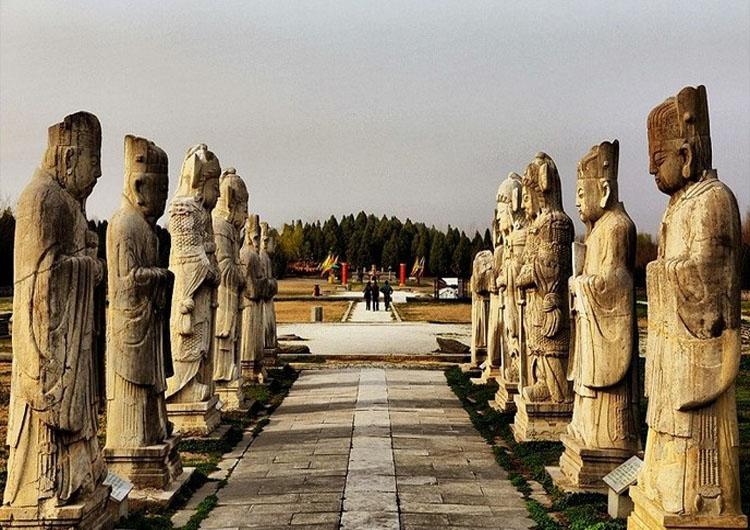 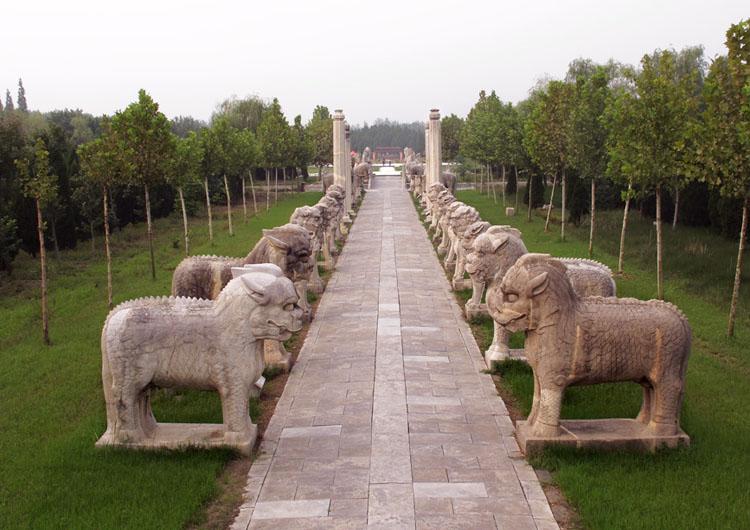 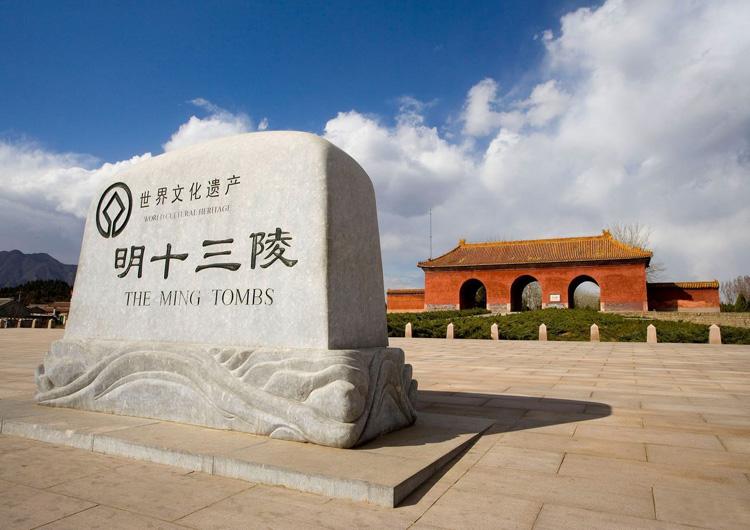 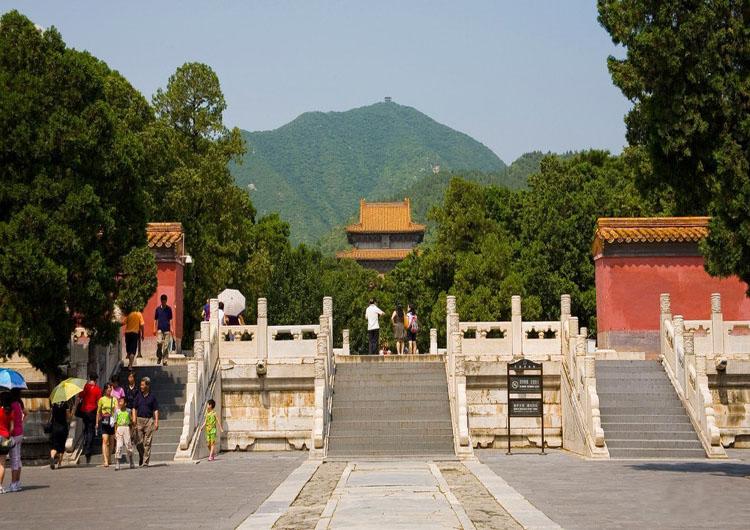 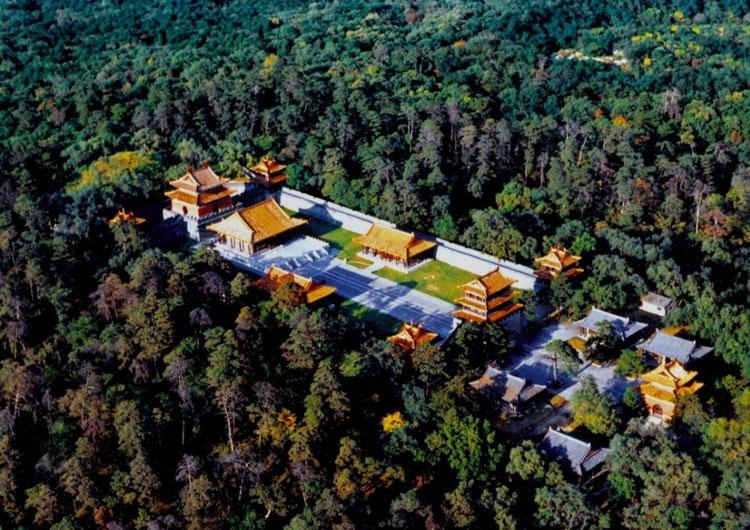 Introduction to Imperial Tombs of the Ming and Qing Dynasties

Ming and Qing dynasties (1368-1911) witnessed a resplendence of the imperial tombs since the significant reform had been practiced by the founding emperor of Ming Dynasty (1368-1644) Zhu Yuanzhang. He expanded the scale of tomb architectures and established a more completed imperial tombs system. Qing tombs carried on the style of Ming tombs, while paid more attention to the match with surrounding mountains and rivers, the marshalling sequence of the tombs which depends on the owners’ seniority in the family, and the development of a complete sacrifice system. The imperial tombs of Ming and Qing dynasties reflect the supreme burial system of Chinese feudal society, the Chinese feudal viewpoints on the universe, life and death, morality and conventions, and also the highest levels of program planning and the art of architecture of the feudal eras. Distributed in Beijing and provinces of Hebei, Liaoning, Anhui, Jiangsu and Hubei, these Ming and Qing imperial tombs are well preserved with the original appearances, and most of them were inscribed in the World Heritage Sites as cultural heritages. These imperial tombs include Imperial Tombs of Ming Dynasty, Ming Xiaoling Tomb, Ancestral Tombs of Ming Dynasty, Ming Tombs, Ming Xianling Tomb, Qing Yongling Tombs, Qing Fuling Tomb, Qing Zhaoling Tomb, East Qing Tombs and West Qing Tombs.

Located 7 km south to Fengyang County of Anhui Province, the Minghuang Mausoleum was built in 1366 for the parents of Zhu Yuanzhang (朱元璋, Emperor Mingchengzu, 1328-1398, the first emperor of Ming Dynasty). Covering about 13 square kilometers, the mausoleum possesses over 100 halls and pavilions. Across more than 600 years, the 32 pairs of stone sculptures on the sacred way, the inscription stele and graves are all well preserved, of which the numbers of stone sculptures and the exquisite carving skills tops all in other imperial tombs. 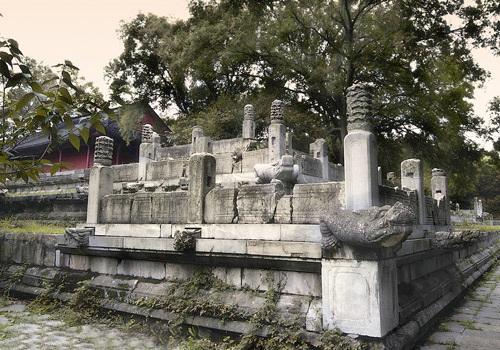 The last restingplace for Emperor Zhu Yuanzhang and his wife, the Ming Xiaoling Tomb is located at the southern foot of Zijin Mountain, eastern suburb of Nanjing City. Being the first imperial tomb of the dynasty, it is the milestone in the development of Chinese imperial mausoleums which had deeply influenced the mausoleum style of the following ages. Built in 1381 and completed in 1413, the Ming Xiaoling Tomb represents the greatest achievements in both architecture and stone carvings of early Ming Dynasty. The tomb has been included in world cultural heritages in 2003.

Located at the western bank of Hongze Lake of Jiangsu Province, the Mingzuling Tombs is exactly the burial site and cenotaph of the grandfather, great-grandfather, and great-great-grandfather of Emperor Zhu Yuanzhang. After the founding of Ming Dynasty, Emperor Zhu had his ancestral tombs rebuild with additional halls and annex in 1386. 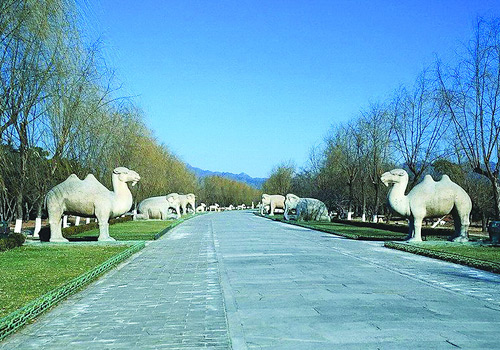 Covering 120 square kilometers, Ming Tombs was built in a valley at the south foot of Tianshou Mountain, 50 km northwest to Beijing City. Started in 1409 with the construction of Chang Mausoleum for Zhu Di (朱棣, 1360-1424, Emperor Mingchengzhu, the third emperor of Ming Dynasty as well as the one who decided to built the tombs), for over 230 years, the Ming Tombs was completed in 1644 when the Emperor Chongzhen (朱由检, 1610-1644, the last emperor of Ming Dynasty) was buried in Si Mausoleum. Ming Tombs altogether houses 13 emperors (of 16 emperors in total in Ming Dynasty), 23 empresses, 2 princes, more than 30 imperial concubines and 1 eunuch of Ming Dynasty. 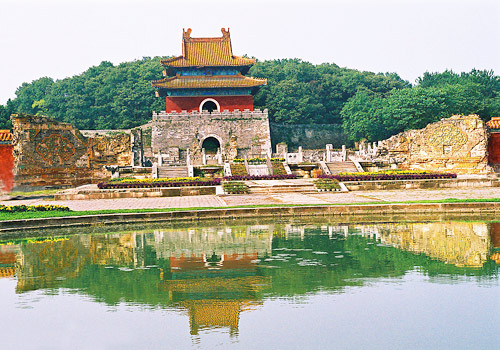 Located in Chunde Mountain, north of Zhongxiang County in Hubei Province, the Ming Xianling Tomb was built in 1519 and completed in 1540 for Zhu Youyuan (朱佑元, the grandson of the 8th emperor, and the father of the 11th emperor of Ming Dynasty) and his wife. Being the first to be listed in World Heritage Sites among all imperial tombs of Ming and Qing dynasties, the Ming Xianling Tomb is the outstanding representative of Ming imperial tombs with the reserved feudal features. It is distinctive with its large outer enclosure wall, which is a bottle-shaped (with auspicious meaning) and made of bricks and stones denoted by local officials of various places of China. And the provenance was engraved on each brick or tile.

Located in Yongning Town, Xinbin Manchu Autonomous County of Liaoning Province, the Qing Yonglong Tombs is the ancestral tomb of Qing Dynasty (1644-1911), which was originally built in 1598. It is the tomb for ancestors of the Aisin Gioro family (the family of emperors of Qing Dynasty). It was included into World Cultural Heritage in 2004 with great architectural and artistic features in the layout, shape and technique. 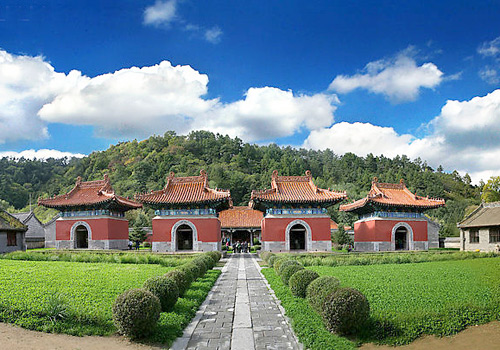 Located in the Eastern Tomb Park of Shenyang City, the Qing Fuling Tomb is the mausoleum for Emperor Nurhaci (努尔哈赤, the founder of the Qing Dynasty who found the first regime of Qing Dynasty in Liaoning Province in 1616) and his wife. Started in 1629 and completed in 1651, the Qing Fuling Tomb covers 194 800 square meters and features 108 steps, standing for 36 Tian-Gang and 72 Di-Sha (both are stars of Big Dipper in Taoism). Hailed as the Three Shengjing (present Shenyang) Tombs with Qing Yongling Tombs and Qing Zhaoling Tomb, they have been in World Cultural Heritage as an entirety in 2004. 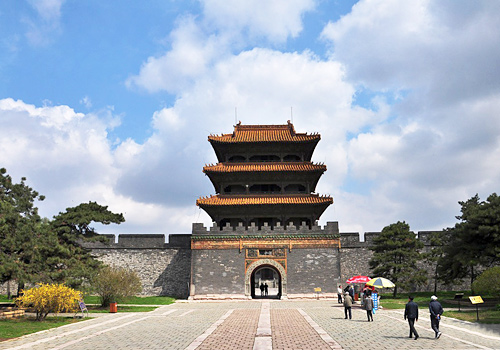 Covering 160 000 square meters and located in the north of the ancient city of Shenyang, it is the largest and most grandiose tomb among the Three Shengjing Tombs. It houses the second founding emperor of Qing Dynasty Hong Taiji (皇太极, 1592-1643) and his empress and some other concubines. It is a tourist attraction combined the imperial tombs with gardens. The towering ancient pines, luxuriant vegetation, rippling lakes, majestic halls and pavilions and dazzling golden tiles present both the magnificent splendor of imperial tombs and the elegance and beauty of Chinese gardens.

Built in 1663 and located in Zunhua County of Hebei Province, East Qing Tombs is the last but the existing largest and most intact feudal imperial tombs in China with altogether 15 tombs for 5 emperors, 14 empresses, 136 concubines and 1 princess of Qing Dynasty. Began in 1661, last for 247 years, it was finally completed in 1908 and reflects a complete evolution of mausoleum system as well as the history of Qing Dynasty. Among its 580 monomer constructions, there are the widest stone memorial archway and the most intact sacred way of the country, the incredible exquisite Buddhist carvings in the underground palace of Emperor Qianlong, the most luxurious decorations of tomb halls in Empress Cixi Tomb, etc. It is included in the list of world cultural heritages in 2000. 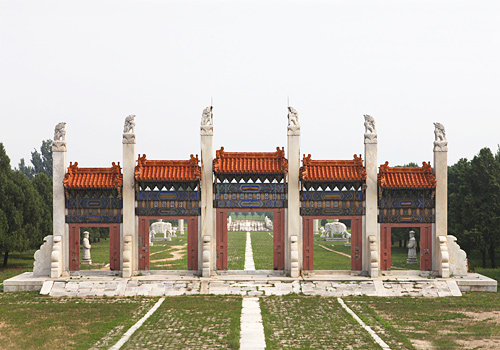 Consisting of 14 tombs, including tombs for 4 emperors of Qing Dynasty, the West Qing Tombs is located at the foot of Yongning Mountain, 15 km west to Yi County of Hebei Province and 120 km to Beijing City. Constructed from 1730, the West Qing Tombs offers the largest ancient pine forest in North China, over 1000 halls and constructions, and more than 100 stone carvings. It was included in World Cultural Heritages in 2000.