Archaological Site of Yin Xu, the cradle of Chinese archaeology and Chinese writing

Located on both banks of Huan River, northwest of Anyang City, Yin served as the capital of late Shang Dynasty (1600 BC-1100 BC) in slave society. With the demise of Shang Dynasty, it turned into ruins. Yin Ruins has a history dating back to some 3,300 years ago. At the same time, It is the first capital ruins with historical records that have been confirmed by oracle bone scripts and archaeological excavation. During excavations, countless priceless objects including bronze ware items, oracles bones, cooking vessels, wine vessels, and jade ware items have been unearthed and are now housed in the Yin Ruins Museum of Anyang, showing the wealth of Shang Dynasty. One of the most valuable historical relics, the square bronze cauldron Simuwu Ding weighs 875 kg, being the biggest and heaviest bronze ware ever found in the world. In early 20th century, the excavation of over 150,000 pieces of oracles bones (inscribed animal bones and tortoise shells, recognized as the earliest Chinese characters) in Yin Ruins brougth  world-wide fame to Anyang instantly. These oracles bones are dubbed as the earliest ''archive'' as they recorded every aspect of social life in Shang Dynasty, including hunting, farming, astronomical phenomena, worship rituals, military, etc. 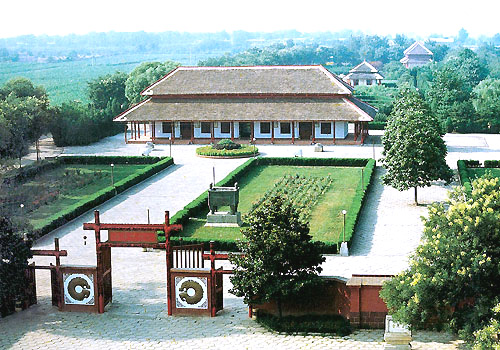 In 2001, Yin Xu ranked first in a selection of China’s 100 most important archaeological discoveries in the 20th century. Then in July 2006 Yin Ruins was included into the UNESCO’s World Heritage Lists, indicating its remarkable universal value. In 2005, a museum was established and opened to tourists. The main gate of Yin Ruins follows the shape of the character ''门'' in oracle bone inscription (gate), quite unique.

Located on the north bank of Huan River, it is the royal graveyard of Shang Dynasty Empire, the ritual site, and the excavation site of Simuwu Ding. This site stretches 450 meters in length and 250 meters in width. Since 1930s, 13 emperors' tombs, more than 2000 subordinate tombs, and several sacrificial pits have been discovered. In these tombs, coffins are luxurious with exquisite funerary objects and many funeral victims. Plentiful bronze wares, jade articles, stone wares, and ceramic wares have been unearthed. 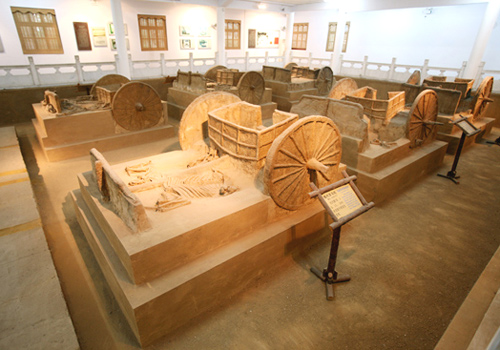 ---Ruins of palaces and temples

This site is where a stunning number of oracle bones were found. Since the discovery oif oracle bones, over 150,000 pieces of them have been excavated here. It is now a demonstration base for nation-wide patriotism education. It covers an area of 22.12 hectares. Most of the palaces and temples were built with rammed earth. By now there are several exhibition halls in Yin Ruins Museum of Anyang showing excavation history of Yin Ruins, Tomb of Fu Hao (China's first female general appeared in historical record, wife of an emperor of Shang Dynasty), kilns of oracles bones, chariot burials, etc. Tomb of Fuhao is the largest and best-preserved tomb in the ruins. 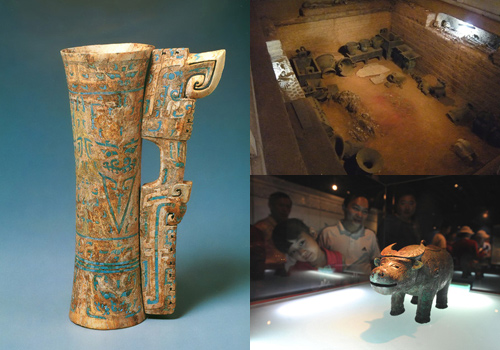 Located on the northeast of Yin Xu Protection Zone on north bank of Huan River, the city shows a square structure, covering an area of 4.7 square kilometers. Its rim has been confirmed as foundation of city wall. Archaeological discoveries show that the city was made up of palaces, burial grounds, a civil residential quarter, workshops and ritual places. The largest foundation covers an area of 16,000 square meters. To the north of the palaces is a residential quarter densely dotted ruins of houses, pits and wells.

The explored Yin Ruins stretches 6 km in width and length with Huan River running through. The ruins are scattered around the ruins of palaces and temples in Xiaotun Village. Remaing historical relics include ruins of palaces and temples, ruins of royal  mausoleums, ruins of a Shang city on north bank of Huan River, ruins of clans, kilns of oracles, bronze-casting workshops, handicrafts workshops and so forth. Most of relics can be found in Yin Ruins Museum of Anyang. 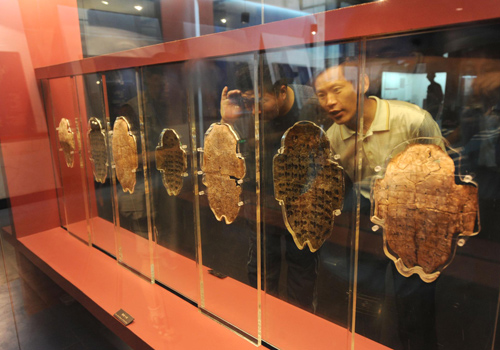