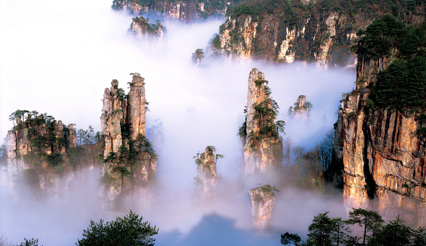 Zhangjiajie in brief Zhangjiajie is a prefecture-level city located in the northwestern part of Hunan Province. Lying at the very center of China, Zhangjiajie is a relief for any traveler looking for some natural sceneries of grandiose beauty. The city, also known under the name of "Dayong", is famous for its Wulingyuan Scenic Area ranked on UNESCO World Heritage Sites list. Zhangjiajie comprises two districts (Yongding and Wulingyuan) and two counties (Cili and Sangzhi) and has many wonderful scenic spots such as Zhangjiajie National Forest Park (especially Yuanjiajie and Huangshizhai), Suoxiyu Nature Reserve, Tianzishan Nature Reserve, Tianmen Mountain,Zhangjiajie Grand Canyonand Yangjiajie Scenic Area. It enjoys a monsoon humid semi-tropical climate that can explain the lush ve...Read more>>

The first national forest park of China - Zhangjiajie National Forest Park with awesome serried forest of peaks welcome visitors from all over the world.

The minimized fairyland – Tianzi Mountain enjoying primeval natural scenery reveals to visitors how marvelous the landforms can be.

Four specialities of Zhangjiajie – gotfan, fernery, umbilicaria esculenta and eucommia ulmoides tea cannot be missed whenever you tour around Zhangjiajie.

Tujia food in Zhangjiajie is not only of prominent national features, but also combines the essence of Hunan cuisine.