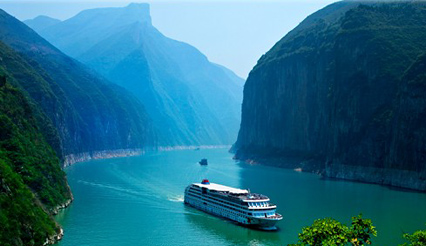 The Yangtze River, or Chang Jiang, is about 6,380 km long and flows from its source in Qinghai Province, eastwards into the East China Sea at Shanghai. It is the longest river in China and Asia, and the third-longest in the world. Besides its economic and agricultural importance in history and modern time, the Yangtze Harbor is important to the cultural origins of southern China. Winding South from the high country, the river passes through the world-renown Three Gorges which tower above it, and besides its natural wonders the Yangtze River has an almost uncountable number of animal species frequent its shores. There is a common Chinese saying which states: If you have not traveled up the mighty Yangtze River, then you have not been anywhere in China. Read more>>

The Mother River of Chinese civilization, as well as the longest river in Asia and the third-largest river in the world.

Biggest highlight and the most commonly sight seen on a Yangtze expedition - the Three Gorges section starting from Chongqing Municipality to Yichang.

The only gorges around the world that you can sightsee by cruise ship, and one of the earliest golden tour routes launched to the outside world.

The world's largest power station in terms of capacity and hydroelectricity production – the Three Gorges Dam where most travelers wish to see with their own eyes during the cruise.