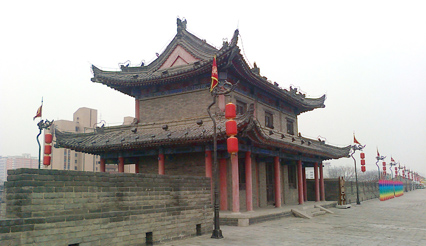 Xi'an in brief Xian is the capital city of the Shaanxi Province, central China. Extremely famous as one of Chinas major attraction, this literally Western Peace also called Changan (长安) in ancient times is known as one of the Four Great Ancient Capitals of China. Filled with numerous scenic, historical and cultural sights, Xian is one of the jewels of the country and a high tourist city of international influence. The city lies in the Guanzhong Plain of central China, in the fertile Wei River valley bordered by the Qinling Mountains, natural and strategical defensive asset. Xian enjoys a monsoon semi-arid climate, spring and autumn are the two best seasons for tourism. Standing as one of the epicentres of early Chinese civilization, Xian flourishes with remnants of this great ancient past...Read more>>

Kingdom of Snacks – it is full of joy to try great quantities of snacks in Xi'an, such as Rou Jia Mo and Pita Bread Soaked in Beef and Lamb Soup, with Muslim Street enjoying huge popularity among the locals.

Review historical moments – watch Tang Dynasty Dinner Show in Xi'an, as if you were back to that prosperous and peaceful era.

One of the four capitals of ancient civilization in the world; capital of 13 dynasties in Chinese history – remnants of the ancient world are in every nook and cranny.

The most well-protected ancient city wall standing in China – Ancient City Wall in Xi'an deserves a page
in history as a formidable defence against enemy attacks.

A treasure house of Shaanxi ancient civilization - Shaanxi Provincial Museum has the great concentration
of historic and cultural relics of China, displaying its immense charm as an ancient capital.

A token of the ancient city - Big Wild Goose Pagoda, in itself a masterpiece of Buddhism in China,
gives a good account of Master Xuanzang and those Sanskrit sutras.