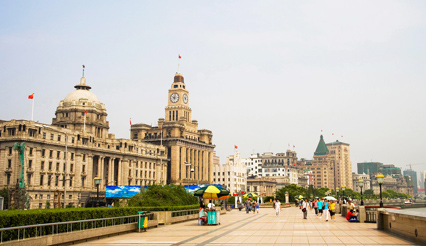 Shanghai in brief Shanghai, Chinas most famous city in the world, is a direct-controlled municipality located at the west of the Jiangsu and Zhejiang provinces, East China. Often referred as the Pearl of China, Shanghai, literally meaning above the sea and abbreviated sometimes as Hu (沪), is a major financial, economic and foreign trade metropolis and harbour of tremendous influence all over Eastern Asia and the world at a larger extent. The city is situated in what we call Yangtze River Delta and is part of the Golden Triangle of the Yangtze with Hangzhou and Suzhou. Consisting of a peninsula, Shanghai enjoys a humid subtropical climate and is registered as the most populous city of the country, having juridiction over 18 county-level divisions. As Asias new financial and commercial cent...Read more>>

Cultural pluralism at Shanghai, diversification in food - Refreshments and snacks from all over the world are available in Shanghai. Benbang Cuisine and its specialties such as Nanxiang Steamed Stuffed Bun, Crab-Yellow Pastry, Fried Stuffed Bun and Chop Rice Cake can never be missed due to its strong and sweet flavour.

Metropolis leading China's fashion – Shanghai enjoys a long history as shopping paradise dating back to its opening to foreign trader; on the Nanjing Road people can buy whatever they desire for.

A tranquility and harmony of the land - classical gardens of China such as Lingering Garden (Garden to linger in) and Yuyuan
Garden, and venerable Jade Buddha Temple invite the soul.

Name card of the modern cosmopolis - Oriental Pearl TV Tower - landmark of Shanghai and the first highest in Asia – possess
marvelous beauty both in the daytime and at night and serves as sightseeing, conferences, exhibitions, food, and radio and
television emission.