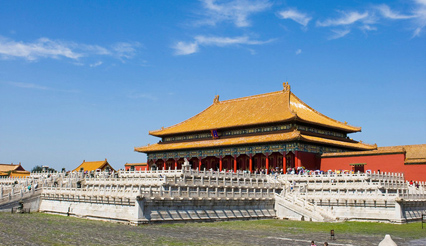 Beijing in brief Beijing, literally meaning the northern capital, is the capital of the Peoples Republic of China (PRC) commonly known as Pekin(g). Located in northern China, the municipality of Beijing is a metropolis bordering the Tianjin Municipality in the southeast and the Hebei Province in the north, west and southern parts: a size which can be compared to Belgium. Beijing is considered as China's political, cultural and international trade centre, while the modernization of the country makes Shanghai and Hong Kong increasingly dominating at an economical level. Divided in 14 urban and suburban districts, the city is now a major transportation hub to every single part of the country. Travelers coming for the first time to China cannot do without stopping by the Imperial city that is...Read more>>

Capital of five dynasties in Chinese history and rich in historical relics – witnesses of Chinese history such as the Great Wall, Summer Palace, Forbidden City, Tiananmen Square, Ming Tombs, The Sacred Way, and The Temple of Heaven tell each and every story relevant to ups and downs of the nation and its people.

The Great Wall, one of New Seven Wonders of the world, is the embodiment of courage, wisdom and persistence of the people of China.

The only city in mainland China selected as one of the fifteen Shopping Capitals around the world,
including Xiushui Street,

Appreciate Peking opera - the quintessence of Chinese culture, an integration of singing, dancing,
acrobatic fighting, music, arts, and literature, and Kungfu Show - a martial art with skills and tricks.