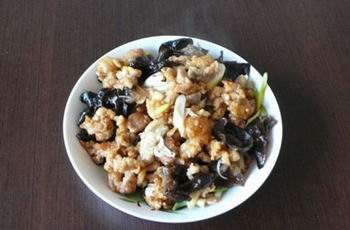 Just as most areas of Shanxi Province, wheaten food are staple food in Pingyao. For breakfast and dinner, tables are mainly occupied by millet congee, steamed bun and sesame seed cake; the lunch are kinds of cooked wheaten food, such as noodles with gravy, noodles served with sauce, and so on.

In the street with imitated architecture in the styles of Ming and Qing Dynasties, various local snacks are found. And each restaurant in Pingyao possesses a unique feature, for instance, Yunjincheng Restaurant offers all kinds of cooked wheaten foods with reasonable prices, Changshengyuan Restaurant has a long history on making Yellow Wine Cakes with distinctive flavors, Changxinglong Restaurant is expert in receiving movie stars, while Tianyuankui Restaurant is a good place to have a cup of coffee.

Pingyao Wantuoze (平遥碗脱则)
A traditional local delicacy invented one hundred years ago in Qing Dynasty (1644-1911) by a chef named Dong Xuan, the Wantuoze is a perfect dish to go with wine. Taste chewy, satiny and savory, Wantuoze is made of white wheaten flours and can be eaten in cold or hot after cooking; it collects the merits of both bean jelly and sausage. The most famous Wantuoze is the ones made by Dong Xingwang, the fourth generation of the inventor.

Pingyao Beef (平遥牛肉)
A specialty of Pingyao which has long enjoyed a good reputation, Pingyao beef was started in Han Dynasty (220B.C.-202A.D.) and known to the nation since the middle period of Ming Dynasty (1368-1644). To select superior round steak, and preserved with salt, the beef is fresh and tender in texture, taste crisp and tasty. The famous workshops for making Pingyao beef are Xingshenglei and Zilicheng, both of which were opened as early as in Qing Dynasty, and the best known brand is Guanyun, from all visitors can purchase beef in package or in bulk.