With the coming of the annual Spring Festival, every city in China, especially the big cities, is always dressed up with vivid Chinese traditional decorations such as red lanterns and welcomes the New Year by holding all kinds of official and folk activities. Come to China and join us during the Chinese Lunar New Year of 2014 and see how cities celebrate the festival in their own manner. 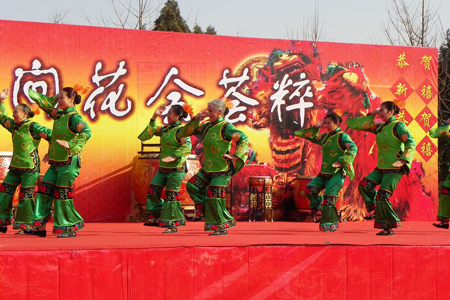 Beijing, the ideal place in Beijing to celebrate Chinese New Year is in one of the city's temples. Around the temples at New Year one can find all of Beijing's unique handcrafts, snacks and cuisine as well as live performances. Organized by local councils, usually festive activities are hold in most local parks, including flower related cultural events, around the Spring Festival flowers and plants in Beijing burst into life creating bright patches of purple against the heavy winter sky. Attendees at these events may be also treated to food that would have been traditionally served to the emperor. In the imperial parks located all around the city tourists will not be treated to traditional performances of Chinese singing and dancing, there are also exhibitions of ancient cultural artifacts that were used in imperial Beijing, visiting of Beijing's many parks in a culturally rich experience during New Year.

2. Xi'an: travel back to ancient China 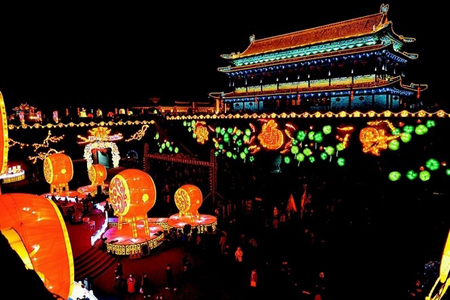 3. Lijiang: only can women lie in on the Chinese New Year's Day

Located on highland, Lijiang is an ancient town where everyone can live a happy and relaxing life in his own way. This old and quiet town is embraced by mountains, which is said to account for 95% of the area. Traditionally, it is women in Lijiang who do almost all of the house work and manual work, so there is a characteristic custom going that only can women lie in on the Chinese New Year's Day and men have to get up early to make breakfast for their wives to thank their hard work through the year. Mentioning Lijiang, the Yulong Snow Mountain, the local's sacred mountain, comes to many people's mind first. How will this ancient town show its charm of antiquity and festive joy and the multi-ethnic flavor? Go there during the Chinese New Year and the Naxi, the Bai, the Yi, the Miao… will tell you how many ways the Chinese New Year can be celebrated in. 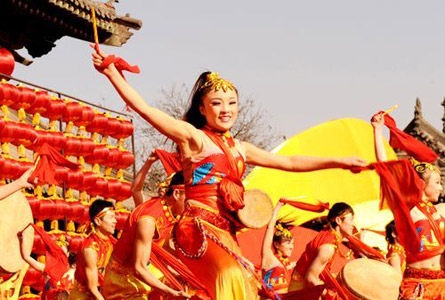 From the Tang Dynasty the residents of the Pingyao have developed several completely unique New Year customs. From the eighth day of the twelfth Chinese lunar month, the people of Pingyao will furiously begin to produce local delicacies and place them on the windowsill of their house as an offering to the gods; these customs have spread from Pingyao to all corners of the country. The first day of the Lunar Calendar is the first new day of the year for the residents of Pingyao, it also represents their most important holiday. In the early of the Chinese lunar December people begin cleaning their houses in preparation for the arrival of the New Year and at night-time the family unit will all get together and make dumplings. On New Year's Eve the city bursts to life with a cacophony of fireworks, song as well as large bonfires, after enjoying dinner as a family it is common to visit nearby friends and relatives.

5. Phoenix (Feng Huang): touch the Miao culture in the heart of western Hunan 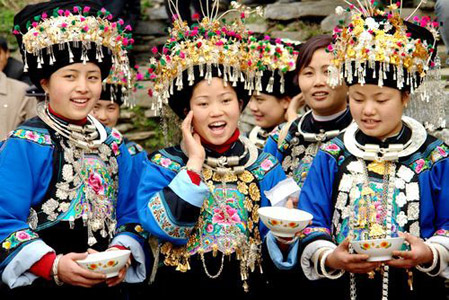 Phoenix is famous for its scenery and abundant travel destination, inside this old town ancient Ming and Qing buildings still stand, untouched from when they were first built. Outside the town is home to the Nanhua Mountain National Forest Park and an array of ancient architecture and the rare Southern China Great Wall scattered through it.

There are scenic spots literally covering all parts of Phoenix, the most famous of these are the Hanging houses along the Tuo River, the Hongqiao Bridge, Huangsiqiao Old City and the Yang Clan Temple, etc. The river flows through Phoenix and the local wash rice and vegetables by the water. The river is also the reason that agriculture in Phoenix is so successful, in the summer visitors to relax and swim in the clean pure mountain water.

There are also Miao ethnic-minority tribes spreading throughout Phoenix and there are three interesting "barriers", including Barrier of Folk Song, Barrier of Rice Wine and Barrier of Drum, for people visiting the tribes. Once being there you will feel the hospitality of the unsophisticated local.

6. Wuzhen: the unique flavor of the Southern Yangtze

Increasingly more traditional festivals involve large family meals; this is especially true during the New Year period. The one thing the people of Wuzhen appreciate more than the beautiful lakes and rivers surrounding their town is the importance of a large New Year's Feast and the importance of spending the Spring Festival in the company of one's family.

Wuzhen historically has a reputation as one of the most communal societies in China, this is can been experienced especially around New Years day when families will pour out into the street and celebrate together, wooden tables will be lined with delicious food served and people will celebrate this most significant of holidays in each other's company.

7. Harbin: spend a happy Chinese New Year in a world of Ice and Snow 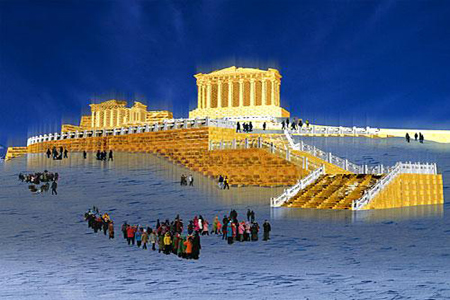 Harbin is a city mixing with Chinese and Russian culture. The magnificent St. Sophia Cathedral, the mystical Nicholas Church, chic gothic buildings, exquisite wooden houses in Russian style, the Central Street in European style are all painted with vivid hue… You can take your time to appreciate this "mini Paris".

Harbin is a perfect city for winter sport such as skiing. The Harbin Ice and Snow Festival is held in Harbin every winter and is catching more and more people's eyes. During the Spring Festival, ice and snow pageants, e.g. Ice Lantern Artistic Show is hold in Zhaolin Park, Ice and Snow World and Snow Expo on the Sun Island. So why not try a joyous and romantic Chinese New Year in a world full of snow?

8. Chengdu: where the spice is unforgettable 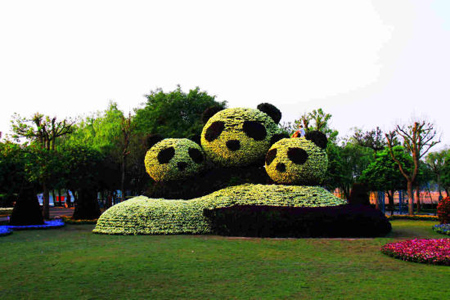 Longquan Mountain's annual Peach Blossom Festival has occurred 27 times since 1987, however its history stretches even further back with people from Zhejiang and Shandong Province's arriving in Sichuan to plant peach trees. Now every March the over 233 square kilometers of peach trees in and around the Shangquan Town bloom to life, creating an amazing and unforgettable immerse experience.

Tourist heading down from the peak of the Longquan Mountain must spend a day at the small old town at the foot of the mountain: Luodai Ancient Town. On the No. 4 of the street is a small hostel that was once a local merchant bureau and was finally restored as now offers tourists on a budget a premium travel experience. The rustic rooms all have been beautifully restored and are affordable at just around 100 Yuan per night. The local specialty is smoked goose, a unique and robust flavor available at just 20 Yuan for half. This small town is the perfect location to experience the unique characteristics of Sichuan rural life during the Spring Festival.

As one of the historic and cultural city in China, Kunming is one of the most popular tourist cities in China assembling both human heritage and natural landscapes. Every year the International Gardening Expo is held in Kunming and that brings this city more and more popularity.

Kunming has a very mild climate without severe cold in winter and intense heat in summer, which brings it the fame of "Spring City". During the Chinese New Year holiday, scenic spots and big public parks in the city are carefully decorated with traditional Chinese elements such as red lanterns. And what makes Kunming more joyous at the festival is its famous romantic product – fresh and beautiful flowers! 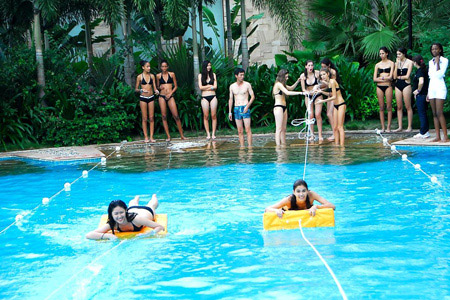 Sanya, the southernmost city of China, is beautiful coastal city. It has a tropical climate, with an annual temperature of 25.0 ℃ and little temperature change all year round. Due to such advantageous conditions, Sanya has been being a popular summer resort to avoid severe winter all the time.

Amazing beach, crystal sea, azure sky, brisk sunlight, fresh air, rich coconuts, delicious seafood, charming ethnic custom… Sanya is favored by the God with more than what an ordinary coastal city processes. Diving in the blue ocean and getting a close touch with lovely sea life, overlying on the soft beach under the sunlight, enjoy a coconut or nice seafood and listening to the song sung by sea waves… What else can be more enjoyable than these?