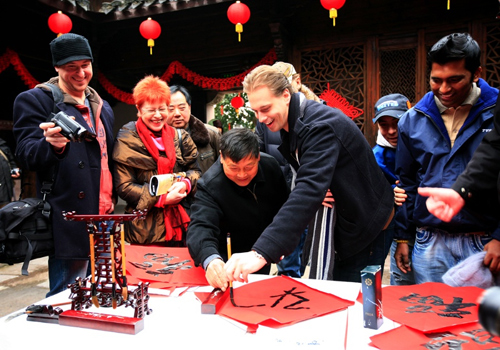 Chinese New Year, often called Spring Festival, is the most important festival of the year in China. It compares in importance to Christmas in the West. Spring Festival falls on the first day of the first lunar month and lasts for 15 days. The fifteenth day is Lantern Festival. Preparations for the festival began as early as two weeks before the festival begins to do home cleaning, purchasing of decorations and food. Virtually everyone in China returns to their hometown for New Year's Eve, where they will have a reunion dinner with their family and will watch the New Year's Gala every year on TV. At midnight, virtually everyone lights fireworks. It is a very exciting moment, when the entire night sky is lit up. Many traditional activities are carried out throughout China, such as the lion dance, dragon dance, temple fair, flower fair, and much more.

When does Chinese New Year fall in 2014?

Chinese New Year usually falls in the months of January and February. In 2014 Spring Festival begins on January 31st and lasts for 15 days, until Lantern Festival on Friday, February 14th.

The Chinese Zodiac runs on a twelve-year cycle, with every year symbolized by a different animal. It is believed that each animal has its own unique attributes and people born under that year share those attributes. 2014 is the year of the horse. It is said the horse symbolizes strength, energy and has an outgoing nature. People born under the year of the horse are said to be intelligent, honest, friendly, and open minded.

Most businesses have a holiday from Jan. 30 (Chinese New Year's Eve) to Feb. 5 and will be closed. Most restaurants, hotels, airports and tourist spots will be open for business to take advantage of the influx of customers.

Although sites are very crowded during the Chinese New Year, it is still a wonderful time to take a China tour. A lot of activities and events take place during the holiday that happen at no other time. The entire country seems particularly cheerful. On our 2014 Chinese Spring Festival tours you will be able to experience Spring Festival like a local. You will feast on the special cuisine of Spring Festival, learn to cook Jiaozi, a Chinese dumpling eaten on Chinese New Year, and enjoy many of the interesting activities that take place. If you are planning on taking a China tour, it is recommended that book as early as possible.