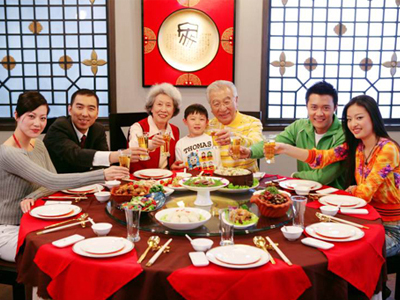 New Year's Eve is the last evening of a year on the lunar calendar. It is called "Chuxi" in Chinese. "Chu" means "remove" or "drive". Similar to the story of Monster Nian, this legend goes that once upon a time a monster called "Nian" often emerged to hurt people at the end of a year. Later people found that it was scared of red color and loud sounds; they put up red couplets, the Chinese character "福" (good luck), hung paper-cuttings, red lanterns at the door and set off firecrackers to drive away the monster for peace in the coming year. These activities have become customs. Chuxi represents people's best wishes for the coming year. Each year, each Chinese family will also offer sacrifices to their ancestors and different deities. They will have a family reunion dinner and will clean their house. It is believed that if the house is swept out on New Year's Eve, they will sweep out all bad luck from the last year, and they cannot clean their homes on New Year's Day because they believe it will be like sweeping out good luck for the coming year. Most people wear new clothing, and get their hairs cut. This is also considered lucky. It means that you are starting the New Year fresh. Each evening, most families watch the China Spring Festival Gala on television.

The New Year's Eve family reunion dinner is very important to each family, and virtually every person in China will return to their home town for it. The dinner consists of many dishes, with many symbolizing prosperity, promotions, long life, and wealth. A dumpling called "Jiaozi" is eaten on the eve. It is shaped like the ancient Silver Sycee, a form of money. It is thought to bring wealth. Fish are eaten, because the Chinese word for "fish" sounds like the word for prosperity.

A favorite custom with younger people is the giving out of Hong Bao (red envelopes). Older people give them to each member of the family's younger generation. It symbolizes good luck, love, and wealth. The money is also known as "yasuiqian", which means "money for suppressing evil".

After the family reunion dinner, the ancient tradition of Shousui is observed. Shousui simply means staying up past midnight to welcome in the New Year. The word "Shousui" has two meanings. For the elderly, it means "cherishing the moment", and for young, it means "praying for your parent's longevity".

At midnight, each family lights off firecrackers to welcome in the New Year.